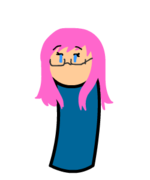 In Petrichor → 3 yrs ago Forum: Casual Roleplay
Ahhhhhh it's good to be away from exams and essays xD When I graduated from Uni, I ran as far away from education as I could :')
In Petrichor → 3 yrs ago Forum: Casual Roleplay
Marissa had suddenly acquired a human. It took a few moments to recall the blonde woman's name, but it came back to her. This time, it was definitely someone she knew; but there was a hint of caution as she whispered the human's name. “Adira... it's been a while.” Marissa was still frazzled from misidentifying Ramm, but luckily, it seemed the bulk of a Felinia hadn't even realised Marissa existed. The fox smiled and let out a relieved sigh, but the calmness quickly disappeared again as the cloaked male figure finally spoke.

The fox was happy enough to take the 'leave now' option. She had volunteered as a Healer and she had hired Adventurers for her quest to find Badger, but even if they could offer her help or protection, there was no way Marissa could become an Adventurer herself. She hadn't the time to help out others on year-long quests when she had her own. She felt selfish, but she couldn't commit to the contract. As she was turning to leave the curtained room, she felt Adira tug on her sleeve, as though she wanted Marissa to queue up to sign the page. Such a subtle gesture was enough to make Marissa feel guilty.

The least the Healer could do was look at the contract. As Ramm complained about using blood to seal the deal, and the petite Elf sewed herself together, Marissa read over the contract, twice, and being sure to look for the small print. “I see, so you want us to use our blood to bind us to this contract?” Marissa whispered as she looked at the cloaked man. “Contract magic... so we can't harm the guild, or anyone in it intentionally. Profits are to be divided equally and we are not to ask or demand any more than our fair-share. We would also agree to aid guild members with their goals in order of urgency. That all sounds like a fair and standard contract, but this bit here concerns me.” Marissa's eyes grew less soft and more serious as she focused on one part of the contract. “The bit about following your orders to the best of our abilities... I take it I'm within my right to ask for some sort of identification that you are indeed an associate of the Adventurer's guild and not just some blood-mage seeking to bind us to your bidding?” Marissa's eyes returned to their gentle gaze. “I'm sorry, but I would like to make sure.” She also gave a side-glance to Adira, as though Marissa was asking if the human had had similar dealings with guild-members like this in the past.
In Petrichor → 3 yrs ago Forum: Casual Roleplay
I'm here too, just came back from being on holiday, but it looks like I didn't miss anything XD
In Petrichor → 3 yrs ago Forum: Casual Roleplay
Marissa had finished her drink. She didn't recognise the small, cloaked figure that disappeared behind the curtain. However, the bulky figure that followed a little later, with black stripes in his fur, she knew him! Of course, he must have been the man she had treated a few years ago from a serious burn on his tail. He had been extremely grateful for Marissa's help and the sweet dreams she had given him.

Her tail swished from side to side as she lost herself to her memories. She tried to recall the Felinian's name. Unable to pluck it from her mind, she slid off her stool and approached the Adventure's Guild. Marissa was certain that his name would return to her once she gazed upon his handsome features.

With confidence, she tugged the curtain back and entered the room. Marissa went to place her delicate hand on the large tiger's arm as she poked her head around to get a better look at him. “It's nice to see you again-” Her words quickly sank back into her throat. Her cheeks began to heat up, ears tall, eyes wide and fur stood on end. This was NOT the Felinia she had nursed in the past.

As though she had touched scorching hot metal, Marissa retracted her hand in the blink of an eye and began to trip over her words. “O-oh, s-sorry, I-I thought you were someone else. N-now that I think about i-it, you have a, uh, very different sense of fashion to my old friend.” Marissa's voice turned to a whisper the longer she rambled and the further her eyes dropped toward the loincloth.

She closed her eyes as if she wanted to shut out the rest of the world. It was SO embarrassing to mistake someone for someone else. She wanted to quickly leave the curtained area, but her legs wouldn't move. She was frozen in place, doomed to face the consequences of her assumptions!
In Petrichor → 3 yrs ago Forum: Casual Roleplay
@Rune_Alchemist I love her :')
In Petrichor → 3 yrs ago Forum: Casual Roleplay
“OWWWWWWWUCH!”

A small child wailed in pain as tears built up in her grey eyes. Marissa gave the girl a sympathetic smile. The fox understood that the ointment stung; but the girl had such a grievous wound on her leg that if it wasn't cleaned and treated as soon as possible, then it would get infected and the girl would suffer far worse than a short stinging sensation. Marissa continued to press down on the rag and the girl couldn't hold back the tears any more. She sobbed and Marissa put her free hand on the youngster's dirty cheek.

“I know, I know dear. It will be all over in a few moments.” Her soft hand stroked the rough skin of the little girl and her thumb swept away the tears.

The patient gasped and sobbed as she tried to be a brave person. She decided to focus on anything else that was not the pain or the wound. Her eyes fixed on Marissa's large white tail. No, that was wrong, it wasn't completely white, was it? There was a subtle yellow in the fur. The tail stood proud in the air as though the Healer had made a conscious effort to keep it off the mucky ground. The child pointed to it and met Marissa's red eyes.

“C-can I stroke it?” She quickly wiped snot on the back of her pointing-hand and returned to pointing at the tail.

Marissa grimaced. “I would rather you didn't-” The girl started to cry again and Marissa's large ears twitched and shot up. “O-Of course you can! Don't cry, don't cry, if it helps you, you can stroke my tail.” She begrudgingly guided her elgant tail to the child's lap and continued to treat the wound; now applying a thicker salve before the bandage.

“Yay! Thank you, Miss!” The grubby girl grabbed the tail, making Marissa cringe. However, the stroking was very soft and gentle and the girl looked a little more at peace. Marissa smiled and focused on her work.

After her final patient, Marissa was tired and groggy. She held her tail in her arms as she headed towards The Lazy Dragon inn, and plucked dirt from her fur. She would have to groom it later. As she arrived outside of the building, she flicked her tail behind her and cautiously opened the tavern's door. Her eyes scanned the tables and bar, searching for individuals she should be wary of. Content that no-one looked too dangerous, she continued toward the bar and asked for a small cup of mead.