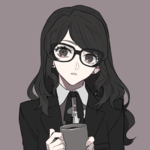 14 days ago
Current wrong timeline of feudal japan and you'll find those predators fighting clerks, using poetry
16 days ago
mihoyo really says one doesn't need democracy to live an american dream
16 days ago
I've never given my attention to genshin until I found out how ten years can morph three-college-students-with-a-small-project into a company with billion dollars asset and thousands of employees
18 days ago
3d-fy her and give us a virtual video streamer
25 days ago
If everyone in this world thinks like that, would the world be a better place or worse? Also, is this question a valid tool to measure every ethical values?

I do RPs for my escapism, so if there's any indication of your RP being an allusion to the currently debated real world issues, I'll be off immediately without even bother to tell you.

Also, I've dealt with toxic people in real life, so if you want to express your toxicity toward my character despite being supposed to be a partner in a group RP, I'll immediately assume that you are another toxic person IRL cowardly hiding in the mask of fictional character, even when it's supposed to be an in-character expression. Please get help, and get functional.