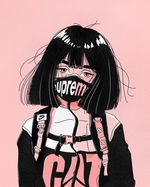 1 yr ago
Speed roleplaying - for those with random bursts of creativity. Drop me a line or five and I can add on.

He peered up at Einar through his rimmed glasses and broke into a pearly smile. "Why, so 'tis true! The rumors around New Dundorma was true! The next batch hunters have arrived!" The Wyverian straightened himself and bowed. "My name is Cotoha, the seer and researcher of New Dundorma's apothecary and more." Cotoha looked questioningly at Einar, "And you must be.. ?"

Einar gave the scholar a brisk nod and glanced behind her, searching for the other hunters. "Einar of Kokoto Village.. sir. I've come to inquire about supplies. Perhaps you could also indulge me on the organisms of New Dundorma? I find they might be quite different from Kokoto due to the latitude and climate."

"Ah, yes! But of course" Cotoha turned around and waved the hunter into the shop. "Come, come. I have an assortment that 'ye might just find useful for your expeditions! Kokoto Village, you say? Might you be familiar with Scholar Asulf? I've quite a liking to his research, 'ye kin. A shame he's passed!"

"And one day, my dear daughter, you too will discover a new world."

The words of Dr. Asulf drifted away as Einar leaned over the port's rail. The scene before her was busy; the airship crew shouting over each other, Hunter's keeping their luggage in order and the occasional palico bustling about. The air smelt like a tint of the ocean and something sweet. "Flowfern?" Her nose sniffed curiously in the air and after some thought, she scanned the shops littered a couple of hundred feet from her. The suspect was built next to many other establishments. The small yet dainty shop had a smartly curated sign near the window facing her. It read "Cotoha Botanik".

Einar eyed the shop curiously. There seemed to be a garden of the sorts located near the back and the door was opened. Near the entrance sat shelves and wheels of all sorts of herbs and bottled potions. With her mind made up, Einar bent down to scoop up her leather bag. She decided it was better to stock up and familiarize herself now before the hunting guild arrived. The leather bag swung around her shoulders and weighed lightly behind her back. It held much of her necessities: from a jar of honey to her favorite book on winged wyverians. She even had a satchel of sweetened water for her Insect. Less her weapon, which she assumed was being brought to their dwellings, Einar's baggage was light.