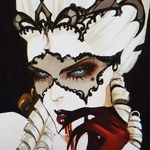 I am tired of making long-ass intros every time I open up a topic! So here ya go, everything that needs to be said is right here. Only 18+ people are allowed who are not scared to delve into a much darker territory stuff.

So here are some simplistic needs of mine that I am looking from my potential partner. If you don't fill these out, we will not mesh well. In these notes you'll learn a bit about me, as well.​

Would prefer a partner who can post a bit more than once a week.

1. Don't ask me specifically about just the "adult content".​

Honestly, I love smut. I never avoid it, I never fade to black, I go through all nitty-gritty, juicy and dirty details that could make anyone hot and bothered. I'm into all sorts of stuff (I prefer to send my F list to the people I agree to write with), my limits go further than with most people. HOWEVER, if you come to seek out specifically about this content from me, I'll have to refuse. I want a story with intimate scenes, because smut is just a one big meh for me without a proper buildup and a story. I want more than that.​

I consider myself a writer, because when I don't roleplay, I write stories of my own. And when I say stories, I mean content with elements such as these: NPCs and side characters, friends, rivals and enemies, hardships, heartbreak, loss, battles, bittersweet victories and unlimited drama. I don't like it when our characters have it easy and very easy-going life. I'll get bored very VERY easily and will probably drop it. When I don't roleplay, I write my own stuff. I am obsessed with details, character development and struggles. While I don't expect from people to be into this as much as I am, I want someone to try it out with me. Also, I hate working on my own. People tend to drop me because I left space in plots for them to help me out to build a story. Roleplaying is two people telling a story together.​

Detailed posts do not necessarily fall into long posts. While you'd think that it would, from my experience, it certainly is not the case. Posts can be long and filled with unnecessary stuff and can even be too tiring to read. Sometimes the wall of text does not apply to the situation, and a post of two paragraphs that has depth in it will be more than enough. I do love long posts, but I dislike posts that are not consistent and unnecessarily long. Two paragraphs minimum is all I ask.​

Tangled stories and personalities, tragic pasts that left an imprint on who your character is. Someone who may be impossible to deal with. A beautiful man with terrifying tendencies. Or a terrifying creature whose gentle, but their nature makes them far more complicated. I will never offer someone a predictable and simple characters, nor do I like such characters to begin with. I do ask that you give some meat and juice to the bone of YC’s personality, something that makes me want to know them and don’t spill all the secrets!

Status: Currently NOT taking any suggestions for plots that are different from what I've stated below. I do happily accept suggestions for plot arcs and character ideas, anything that is different from what I'm currently looking for will be rejected, since I have space for one or two roleplays max and this is what I've been desiring to do. Can't help it, girl knows what she wants!​

It's been quite a while since I played the Witcher, I'll be honest I wasn't the biggest fan of the show, although it did make me a bit nostalgic for the games I don't have time for. So I'd like to enter this roleplay with a more open mind and freedom when it comes to elements both in the world and story in general. Nothing too strict, because my main focus here is to have a blast with the theme and vibe of the universe. I did have some ideas I wanted to play around with that may not really be considered a part of the Witcher universe at all, but it would still keep the same spirit and atmosphere that could still pass as the part of the universe. I wouldn't go that far. So consider this more experimental and free-form when it comes to overall story.

I have some elements that I am interested in doing. The main plot would mostly revolve around a court wizard who's practicing very dangerous magic, more dangerous than chaos. It includes mind control, demonology and possessions. With such dangerous power and seeing how much he can achieve from it, the court wizard got quite ambitious.

Your Witcher has worked with this wizard in the past, but they did not remain in good contact. The Witcher didn't initially know how dangerous this wizard is and he'll probably have to find it out the right way.

Our characters will clash at the start, however they might realize that something is not quite right about the situation, lower their weapons and talk it through, only to come to some worrisome conclusions.

How you portray your Witcher is up to you, it can be your version of Geralt, or an original character, its up to you. (Not mandatory, but the white hair! Please?)

I'll leave some detailed information and choices for MC we can use and build from there. If this catches your interest, just shoot me a message and we can go more in-depth with story planning!

This information will be of useful for the overall plot that can complement Witcher's arc as well, so I will suggest you read it through.

- MC is a "cloak and dagger" assassin. I would even lean towards the more pirate background and aesthetic. A living legend of a woman who was allegedly the daughter of the (late?) fierce pirate captain with a large backstory of a curse he cast upon himself after leaving his crew to die. The stories about the scary pirate with a masked crew of skilled assassins were able to ruin an entire empire, but never to be caught, they were known to be the kings of the sea and shadow, only coming out when the night falls. His daughter is like a living legacy of that legendary pirate brought an intrigue among the upper class citizens as bards would sing about a masked woman that would either seduce her target, be it a man or a woman, before killing them and taking everything of value before disappearing into the night. Everyone likes a good and exciting mystery, but the reality is even more interesting, because she's not who they think she is - it is a woman with a tragic background who created a false image of herself and became a living legend among the people. But without the proper and infamous attire, she can stand in the middle of the crowd and they wouldn't know that they share the space with the same assassin that could be after them.

Since the assassin is masked and well at hiding her identity, her part-time job can even be a traveling court bard, snooping around for secrets. A traveling bard by day, a masked assassin by night, gotta love the intrigue stories.

- The idea for her being a bard part time was inspired by Dragon Age bards. Before she became a pirate, she went through the "bard" training - information broking, eavesdropping, breaking and entering, stealing, killing, blackmailing, all in the disguise of a charismatic traveling bard where she learned most of her current social tricks and got her personality of a theatrical and memorable persona. She can definitely poke the Witcher from time to time and play him "Toss a coin to your Witcher" and ngl, I freaking love that song haha Witcher might run into her in separate instances when she's using her different personas. Question is, will he manage to recognize her?

- An idea of her past that can be tied to the Witcher: The assassin is actually a princess of the kingdom that no longer exists, without anyone alive to even prove the legitimacy of her lineage. When she was barely 10, a war broke out and someone, be it a king, a malevolent mage or whoever with power, absolutely destroyed her homeland and there's nothing left. So even if her rights are recognized, she has nothing legitimate that belongs to her. She does have a pendant of the golden dragon's eye passed on by her royal ancestors that offers her some sort of protection from offensive magic, but she's not resistant to curses. I was thinking that the Witcher has worked for her parents before and that they were very fond of him, and my character kinda remembers it, but she will only remember it after she spends some time with him. If your Witcher is one among the last Witchers in the world, the two will have something in common - them being the last of their kind.

I'm hyped for this plot, lets do this!
1x Like

Please message me with your ideas, suggestions or just what you have for your character! :D
Hidden 1 yr ago Post by Blade17
Raw —