"The song is ended, but the melody lingers on." — Irving Berlin, 1927
CAJON JUNCTION, CALIFORNIA
RISEN
Seventeen years since Andy Rutledge's life was taken for him due to a terrible car accident. The world around his death site changed for better or worse. Several fires broke out throughout the years around the area, while the freeway received much-needed work to improve traffic flow. But, Cajon Junction remained the same as the years passed. The gas station received more people as they were eager to take a break or refill their car. There were now two fast-food restaurants instead of one competing against each other. And the local inn recently received minor touchups to attract more costumers. Today, though, it was a quiet one with only a few cars at the parking lot.

In the distance, though, there was a faint song playing nearby the railing. Suddenly, a hand appeared as it desperately tried to muster all of its strength to pull itself up. Eventually, the person successfully got themselves onto the asphalt. That person was Andy Rutledge in the fresh as he kept on coughing up a mixture of sand and blood. His glassy eyes were still dilated as the song faded. Then, his eyes changed back to normal. Still wearing the same outfit that he died in, Andy was left dazed and confused for a minute until he noticed his car was gone.

The first thing that Andy did was raced over to the inn and asked one of the employees if they saw his car. Unfortunately, they haven't seen that kind of car in awhile. So, he went over to the nearby gas station to see if it was still there. Again, no luck. Naturally, he tried to contact his folk but found out his phone wasn't working. In the act of desperation, he decided to hitchhike. There were people at the station, but none of the owners were willing to give him a lift. Until he reached a young man who just got done refilling.

Andy waved him down and attempted to plead for a lift to Blanco. Fortunately, the man planned on passing there and agreed to drive him there. The two men got in the car and exchanged names before driving off. Dustin, the driver, turned the radio on, and it began playing a rather unknown song. Andy was taken back by the strange sounds and the vocals but in a good way. He kept on listening to several similar songs and wondering how he never heard of them before.

Abruptly, Dustin got his attention and told him that they had arrived. Andy was surprised how quickly time flew but thanked him for the ride. Now that he was back in Blanco, he had a second thought about going to the police immediately since he couldn't remember what happened. And it would have been rude to not tell his family first. So, he started making his way home. Thankfully, it wasn't far for the freeway exit—just a few minutes of walking until he made it to the apartment lot. Immediately, Andy realized that the buildings were a completely different color. They were a dark tan instead of the light blue, which he didn't like the choice. But, he wondered how it was painted that fast.

He made it to his door and tried to open it, but it was locked. Luckily, he still had his keys in his pockets (along with his wallet) and unlocked it. Upon entering, he saw some beer bottles on the table and knew that his dad was home. Andy shouted out loud as he closed the door, "Dad, I am back!"

Andy was going to look for dad in the master bedroom, but he heard his stomach growling and looked at the kitchen. So, he went to the kitchen and began looking around for something to eat. That was when he started to talk about his car loud enough that his dad was able to hear. "I... I think that I was robbed at the junction. I don't know where the car went. I asked everyone in the area, but nobody saw anything!"

He paused for a moment to prepare the stove to make some grilled cheese sandwich and then resumed telling his day. "I tried to contact you and mom, but my phone wasn't working. Said it had "no service" even though I paid a lot of money. What kind of crap is that?! Anyway, I had no choice but to get a lift for a stranger..."
2x Like 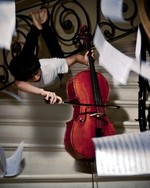 Seventeen years... that was how long the old father Nicholas had been mourning. No story had come from his pain, there was no grand journey that pulled his torn heart along until it healed. A man who would not arrive to the gates of a new chapter of life, there was no change, no growth, no letting go. Just a poor man who could not move on- unable to make peace with the dead haunting his soul.
He thought he was smart, that he could outrun the pain, but it was too late when he realised it had never left his side and festered and boiled under the surface of his skin until it bled out and hardened into chains of his own making. Their cold embrace chilled his heart until those closest sheltered at their own hearths for warmth, the flames of his own soul were doused with alcohol, and his mind would be lost at the end of each bottle- until he began another in an ever-repeating cycle.

The memories of family and what was lost were thrown in a box and long forgotten, but even as the days turned into weeks and into years, the father Nicholas could not forget the face of his lost son. How proud he felt when the news broke about his enrolment, how frustrated he became when the family was forced out for a picnic and a long walk.. Recalling his voice though, was another story entirely.
Loud calling stirred Nicholas awake, slowly what was left of his thoughts reassembled in his mind from the jumbled mess that they were in, he shifted in bed to face further from the noise willing to ignore them for more sleep. The voices continued and were followed by harsh clangs and sharp ticks of pans moving and the oven being set. It was then that his mind finally began to make sense of the situation from what he could gather in his drunken slumber. A man's voice he did not recognise, inside his home.

He was out of the bed, out of the door, out into the hallway as fast as his half-woken legs would allow. His arm leaned against the wall, supporting his balance as he stood towards the unknown intruder, standing in his kitchen.
"Alright asshole." he bellowed, raising his voice over the man, "get the hell OUT. This is MY HOUSE. I'll beat-..." It was then his sleeping mind decided to turn its gears, and he recognised who stood in his kitchen..
His voice came out more as a whisper...

ANDY RUTLEDGE
RUTLEDGE RESIDENCE, BLANCO
CONFUSED SOUL
Andy turned around to noticed his father was screaming at him. Then, he froze and began to lose his balance. Without hesitation, he ran over towards him and caught him before he fell to the wooden floor. He immediately noticed the smell of alcohol, which explained the freakout, and then how heavier and... older dad got? His attention shifted towards the apartment and seeing the little details. Like, how it was incredibly silent. And the fact that there were barely any photos on the walls. For a second, Andy wanted to leave his passed out father on the ground and look around. Yet, he wanted to at least give his father somewhere comfortable to sleep off the alcohol. Using his strength, Andy dragged his father across the living room and placed him on the couch.

Afterward, Andy remembered his grilled cheese sandwich on the stove and raced to save them. Thankfully, they weren't too burnt. While he was eating them, Andy started to inspect the house by going to his room. When he opened the door, the room was emptied out beside a bed and a dresser. It was a surprise to see most of his stuff was gone. Hopefully, it was just at a storage lot waiting for moving day. Then, he went to his parent's bedroom and saw how disgusting it became. The room smelled horrible while there were several stains on the carpet. That was when he noticed a strange device on the nightstand.

Andy told himself to leave it alone, but his curiosity got him in the end. He inspected the device until it came on. It was... a phone? Andy thought it wasn't until he saw the call icon on the bottom. When he tried to press on it, there was some sort of password in the way. Andy had second thoughts and thought of using his phone again. But, when he tried to call his sister, it was still out of service. With no other choice, Andy stared at his dad's phone and started to guess the password. First, he used his father's birthday. It didn't. Then, the date of his wedding. Strangely, that didn't work. Andy used several different birthdays and anniversaries until...

He entered his own birthday. In a split second, the phone unlocked and loaded up the contacts. Oddly enough, there were plenty of unfamiliar names on it. But then, he saw his sister's name and pressed it. The phone began to ring and ring, but she didn't answer, and it went to voicemail. There was some part in Andy that didn't want to ask his sister to clean up the mess. But, he didn't want their little brother to see the place when they get back.

So, he took a deep breath and began to speak. "Hey, sis. I know you're worried that I didn't call you. It's a long story, but... I need help. It's dad. I-I don't know how much he drank, but it was bad enough that he freaked out at me. The last thing I want is Caiden seeing the beer bottles. I was able to place him on the couch, but the place is still a mess. I get it if you don't want to help, but I will make it up to you! I promise."

After he was done, Andy hung up and placed the phone back on the nightstand. He took his plate of grilled cheese sandwichs and put them in the kitchen. There was no way to tell time, but he knew, for a fact, that Caiden and mom were coming home. So, Andy got to work on cleaning the apartment.
1x Like