2 yrs ago
Current Finger Nails or Toe Nails???
2 yrs ago
RISING UP TO THE CHALLENGE OF OUR RIVALS!
3 likes

This is my second profile on here, and I have been Play-By-Post RPing for about nine years now. I do my best to see every RP to the end or at least let my character come to his/her own dramatic conclusion when I feel like signing off. Just like novel writing in real life, I tend to find myself on long hiatuses. Since writing is a great way to work out your brain, I try stay engaged as much as possible.

My favorite genres include futuristic worlds, mysteries, and super powers. Any mixture of these three elements will peek my interest.

I have some changes to make to the battle system again, some minor changes to do with Special Techniques.
To be clear though, I'll go ahead and post all the current rules involved with the battle mechanics.

First, your Power and Health start off at the same number at the beginning of the match.
Then, you can spread your Total Power stats across your three stats (Attack, Speed, Defense) and your Special Technique (if you use one).
Then, you can apply a serious boost of x2 to any one of your stats.
Then, you can apply a special technique, which will either boost one of your stats, or debuff an opponent.
The amount of boost/debuff is based off the amount of ki you spend on the Special Technique and if your opponent has seen it before. If they've never even seen it, you'll multiply by 2.5. If they've seen it, but not experienced it first hand, you'll multiply by 2. If you've already used the technique on them, you'll multiply by 1.5. Then simply add/subtract that number to your or your opponent's corresponding stat.

Once both combatants have launched their attacks, I'll calculate damage and exhaustion. You don't need to know all the details behind these calculations, but I can give you an overview:

Damage dealt to your opponent is taken from your Attack and your Speed. For attack, I'll take your final Attack stat and do a roll for damage based on that number, with the minimum damage being at least 50% of the Attack stat. I.E. if you roll an attack stat of 1000 and get a 400, you'll automatically deal 500 damage. Anything above 500 means your attack was especially effective. For speed, it's much more simple. Simply take 25% of your speed, and that's the damage you deal because of Speed.

In Pokemon: Battle Island (a Showdown RP) → 16 days ago Forum: Free Roleplay
@Potemking@Crimson Flame
Actually, I hope I don't disappoint anyone with this news, but I'm hitting a writer's block with all this, so I think it would be best to cancel this RP.

On the flipside, if either of you want to start your own Pokemon RP, you can use my map if you want. I can even change the names of the locations and add things to the map.

EDIT: Or if anyone at all is seeing this and would like to use this map, let me know. 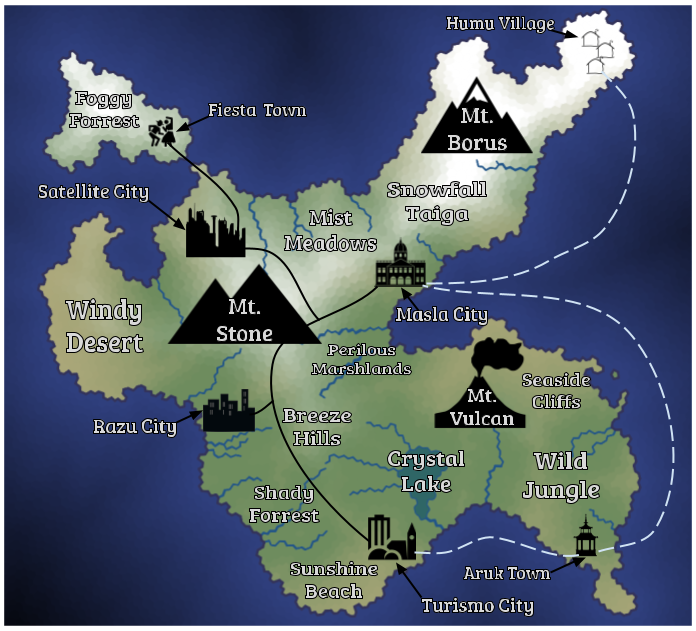 @Double You or Darkmoon, and she was stated to be watching the fight.

Well, we have two different plot lines going on at once right now, and they are pretty independent of one another. So yes, either Darkmoon or Double can go next.
In Pokemon: Battle Island (a Showdown RP) → 23 days ago Forum: Free Roleplay

Haha! No, I have others in mind, and it will be an open RP to anyone that wants to play. I just tagged you two, because you were already a part of the conversation.
In Pokemon: Battle Island (a Showdown RP) → 23 days ago Forum: Free Roleplay
@Potemking@Crimson Flame
Sorry for the delay, but I've been working on the map for this island where this RP will take place. Without further adieu, here it is...

What format would we be using on Showdown? Also do you have any plans on banning certain items, moves, or mons?

I was just going to use the [Gen 8 Anything Goes] format, but to be honest, I'm not up to date on the meta.

Are you? Do you have any suggestions?

As for items, I was going to go with NO ITEMS, except for items awarded by winning battles.
In Pokemon: Battle Island (a Showdown RP) → 1 mo ago Forum: Free Roleplay

Do they have to be canon Champions though?

No. You can pick a canon champion if you want, or you can make an original character.
In Pokemon: Battle Island (a Showdown RP) → 1 mo ago Forum: Free Roleplay
I want to do a quick RP that combines two of my favorite childhood anime: Pokemon and Yu-gi-oh.

What I mean is that this is a Pokemon RP, but done through a tournament format inspired by season one of Yu-gi-oh! Duel Monsters.

The plotline goes as such... There is a big tournament being hosted on this island, with the reward being 3 Master Balls, a crazy amount of money, and the title of the world's strongest Pokemon Trainer. Only Pokemon Masters (reigning and former champions of their respective regions) are invited to participate.

Each trainer is allowed to bring 9 Pokemon with them, and only one Legendary/Mythical Pokemon per trainer. They will then battle for prizes, points, and to ultimately become the tournament's champion. Hundreds of trainers will be invited to this grand event, but only one will come out on top!

Battles will be held through Pokemon Showdown, and hosted at certain REAL WORLD times, when I can be online. How it will go is, I will let everyone know (days in advance) when I'll be online to host a battle. The first two people to respond, saying that they will be online at that time, will then log on at that time and battle each other.

The winner will get a star badge (the points needed to win the tournament). If for some reason, only one person signs up for the battle slot, or if one trainer doesn't show up on time, we will look to see if anyone else is online that wants to battle. If there are no takers, I'll create a character, and you'll be battling against me.

The first four players to get 6 star badges will make it into the single elimination bracket round.

This RP will be very relaxed. Meaning, that anyone can drop in the IC section and RP as one of the Pokemon Masters that are in the tournament. But to actually participate in an official match, you'll have to get your team approved first.