STATUS: The world is ugly, but you're beautiful to me… are you thinking of me? Like I'm thinking of you… 1 day ago 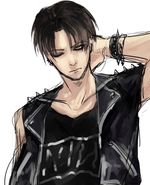 1 day ago
Current The world is ugly, but you're beautiful to me… are you thinking of me? Like I'm thinking of you…
2 likes
14 days ago
There's nothing like a trail of blood... to find your way back home
4 likes
1 mo ago
I'm breaking down, over and over again…
1 mo ago
Okay okay not hiatus. More like breaks-between-replies, but maybe not too long
1 like
2 mos ago
I'm pretty much on a long hiatus right now. Something happened that I need to work through.

I do have some main pairings, but I might be able to set those aside.

Cecily stood staring around at all of the animals passing, eyes narrowed and interested. She, for the most part, didn't care that she was standing directly in the walkway, except for when someone purposefully elbowes and jostles her.

That happened right now, and someone - they were too quick to let her see their face - muttered lowly in an irritated tone. "Watch it," they grumbled. This truly infuriated Cecily, because she had been watching it. That was exactly what she was doing. She snapped back at him, "You watch it, sir… miss… whatever you are." Her voice raised at that part, so it could reach the mystery animal. "You know who you are!"

Mumbling half-hearted insults under her breath, she almost returned to watching, but decided that maybe it really would be best if she just moved out of the way. After all, the view didn't matter. It wasn't like she would've been able to fly to watch up and around, and she was not an actual fly who can see things very well in all angles.