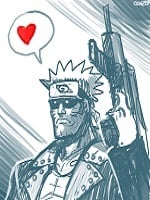 9 mos ago
Current Fishing rods and Big Freakin Guns - youtu.be/U4lz8MN6MQA
2 yrs ago
A question thread of mine has become possibly be useful for everyone. Thanks @OwO roleplayerguild.com/topics/…
3 likes
2 yrs ago
Character sheets are necessary for GMs to make sure you have an idea of what you're doing and aren't going to pull random nonsense. Also necessary for guaging power scale.
13 likes
2 yrs ago
Just opened up my first rp here :3
1 like
2 yrs ago
Half an hour before her feeding time, my cat starts howling like she hasn't eaten in a week.
2 likes

I'm just a dude who likes vidya games, anime, Star Wars, all that cool nerd shit. Proud of it.

In Star Wars: Legacies Recruitment Drive → 2 days ago Forum: Advanced Interest Checks
Am interested. Though it'd be great if a summary of the rps events were to be put in. Just like the big bits and such.
Along with the list of actives.
In Doom's Testing Thread → 7 days ago Forum: Test Forum
In How Do You Dress Your Non-Humanoid Characters? → 7 days ago Forum: Roleplaying Discussion
Hello my baby hello my honey
In How Do You Dress Your Non-Humanoid Characters? → 1 mo ago Forum: Roleplaying Discussion
I've played a slime. He doesn't wear anything. In fact most articles of clothing that are made of materials that he can soak through are outright impossible to wear.
In TDAC#4 - Voting and Feedback → 1 mo ago Forum: The Gallery
Purple Jellyfish
In Naruto: Fire From Ember (open/accepting) → 1 mo ago Forum: Casual Roleplay 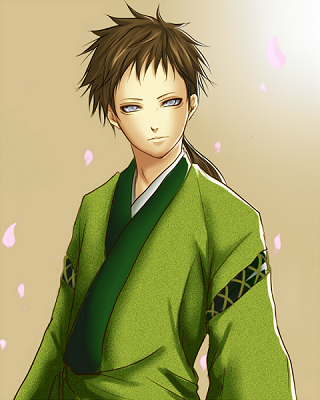 What an even bigger pain in the ass! Sensei was going to kill them. Probably. Probably was enough to not want to take the chance that she wouldn't. Whelp, Kenshiro didn't feel like dying yet, so he was going to make sure that Kuree couldn't kill them even if she wanted to. There were two options... Ken was a little bit slower than Shiori to get up, but it wasn't him being lazy. He scanned over the small crater that Kuree's beam had cut into the ground. Getting hit by that wouldn't be good... and trying to use cover to block it would be stupid. Fighting this woman required the same strategy as fighting a bull. Get the hell out of the way.
“I need a distraction.” Shiori told him, and by now he was fully stood back up and ready. "Got it! Go for her legs, or for the kill." His statement was more than a suggestion or simply an order, it was sharing his plan. What he also intended to do. Disable Kuree enough so that they could outrun her, or neutralize her from being a threat entirely.

Truthfully Ken didn't know what exactly Shiori was going to attempt, but he trusted it would be something sneaky and lethal. He was counting on it. As fast as he could, he was off, running into the fray. But he wasn't going towards Kuree, instead, he was going to Burai who'd just finished telling them to run. He'd heard every word of what was yelled out, impossible to ignore, and it was just as frustrating as just a moment before! Burai needed a fixing, immediately.

Kuree wasn't merely waiting for them, creating clones that began flinging trees into field towards them at a rapid pace. Tree after tree flinging past and exploding into splintering shrapnel. Yet even with this obstacle, Ken barely slowed down at all. The boy bee-lined towards Burai still, ducking under a flying piece of log just a few feet from the other kid. Whether or not Burai needed the help, even if he was dodging fine on his own, Kenshiro leaped and grabbed him, yanking the other boy and himself down into the crater that Kuree had made. Giving them cover from the trees just long enough for Ken to finally put an end to this stupidity. "Burai quit your goddamned grandstanding!!!" Kenshiro outright yelled this time, letting go of Burai's collar with a bit of a shove. He gave a frustrated sigh as he caught his breath, continuing with a firm tone, but not showing anger any longer. "I don't know what you're trying to prove, but quit trying to bet both of our lives on whether or not you can take this bitch on by yourself. As soon as she's done with you, she's coming after me next! I'm not taking that bet, and you shouldn't either."

With another pair of trees exploding above them, the crater granting just enough cover to block all the meaningful pieces of shrapnel, Ken quickly told Burai his plan, there was no more time to figure it out, it just needed to be done. "We need to damage her legs and then take out those clones. Or kill her! Back me up!" "Byakugan..."
He waited just a couple more seconds, just for the next pair of trees to smash into each other, and as soon as they did Ken bounded out of the hole directly towards Kuree. Pieces of wood fell all around him, one almost slamming into the back of his neck were it not for a last minute dodge from an angle that he shouldn't have been able to see. As soon as he was within close enough distance, he popped the cork on the waterskin at his waste and with chakra swung forth a whip aimed directly at Kuree's chest. It may have been a surprising move, but the whip looked not much more powerful than a regular whip. On its own, it was unlikely to do more than bruise an opponent like Kuree... Were it not for the Gentle Fist energy infused within aimed right at her lungs.
Regardless of the whip's success, Ken already was charging his other arm full with energy. Powerful, sharp chakra engulfed his entire arm, and extended a small few inches off of his closed fist. "Chakra Drill!" He shouted as he moved to try and slam the drill into this Jounin.
In Naruto: Fire From Ember (open/accepting) → 3 mos ago Forum: Casual Roleplay
I'm just a dude who likes vidya games, anime, Star Wars, all that cool nerd shit. Proud of it.
<div style="white-space:pre-wrap;">I'm just a dude who likes vidya games, anime, Star Wars, all that cool nerd shit. Proud of it.</div>
© 2007-2017
BBCode Cheatsheet