She reached for the pitcher of mead, and offered to pour the woman a glass as well, despite the fact that she was the one to pay for it eventually.

"May I just say, what a lovely pair of earings you are wearing?" Her lips pursed at that, leaning forwards squinting at the shiny jewels. Eventually, she moved one leg above the other, placing both her hands on her own lap, swirling her leg in the air casually.

"Please, by all means, tell us what plagues and pains you so. How can we be of service?"

In (D&D 5E) The Tyranny of Dragons, Part 1; Hoard of the Dragon Queen → 1 yr ago Forum: Tabletop Roleplay
a WIP - need to add my story + a couple of small details.
I do need help to understand what's wrong with the coding :S
Anyone willing to help? - HA! I managed to solve it by myself! * takes a bow * 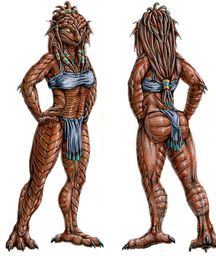 (NG) (Dragonborn - Green) |Barbarian 1 | Entertainer - Chef
"I wonder if that would go well with...."
Attributes
AC 14 • HP 14/14 • Speed 30
STR 16 (+3) | DEX 14 (+2) | CON 14 (+2)
INT 10 (+0) | WIS 11 (+0) | CHA 10 (+0)
Saving Throws: STR + CON
Skills: Acrobatics, Perception, Nature, Performance Expertise Skill
Tools: Cook's utensils, Herbalism kit, Bagpipes Expertise tools
Languages: Common, Draconic.
Arms & Armour
Armour | Unarmored
Weapons | Greataxe, 2 handaxes, 4 javalins.
Appearance
Age: 21 | Height: 6'2" | Weight: 287lbs
Surina stands tall compared to any human female, though compared to her own race, she has always been a fairly short one. She has broad shoulders, and scales covering her shoulders and arms.
Her face is that of a dragon, though her eyes have a certain curve to them which might suggest her femininity - with a second eyelid that she will use to bat at, when trying to impress someone.

She Has hairlike thorns coming out of her head, and usually kept tied with a piece of cloth behind her head, to not let it interupt her cooking.
Adorned with simple loin cloth to cover her modesty, along with a fabric tied around her chest, most of her body is visible. She has a large cape with a hood to cover herself up entirely, if the need arises - as sometimes she is unwelcomed in her full appearance wherever she goes. 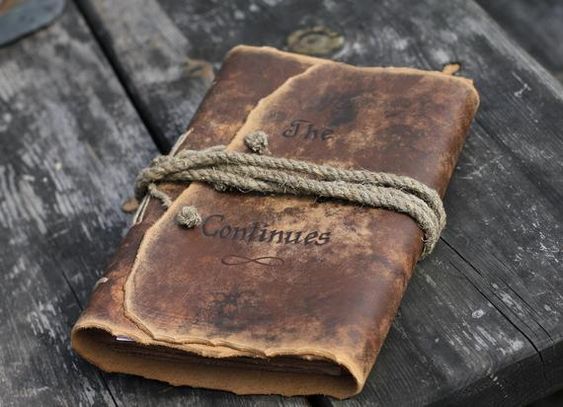 Name: Surina's recipes | Size: Tiny | Weight: 1lbs
A small leather bound collection of parchments, written in draconic. The writings are fairly large, the parchment themselves are fairly thick, and it seemed whoever wrote this - was using way too much force, making near etchings along the paper.
Personality
Main Mood: Curious | Fave Food: Meat filled savory pastries| Pet Peeve: Thinking that she is Savage - She is actually very well read | Style of Battle: If she is enraged - It is like watching a dancing beautiful woman, only the moving of her hands is accompanied with splashes of blood and body parts, the movement of her own body is powerful and frightening, the music to her moving is her enemies's screams.

Surina usually holds herself with pride in her every step. She is proud and confident. The strength of her ancestoral draconian heritage flows through her body, making her ever so peaceful. Knowing she holds the power to defend herself and those dear to her, allows her to maintain a calm perspective on things. That is, untill someone mistakes her for being a savage. She might be a barbarian in spirit, but she is not some uneducated, unlearned wildling. No. She is a daughter to the Norixius Clan.

Her main goal in life is to live a simple, honest life, full of small pleasures - such as the flavor of freshly backed savory pastry. Or the love of a woman. Or perhaps the wonderful melodies her clan had written for the bagpipes. She would avoid battle if conversation could solve the situation - though she will not hesitate, to say the least, to attack first should she be mistaken for a savage.
Origin
Surina was part of the Norixius's army. The clan was not a big one, a couple of hundreds of dragonborns live as part of Norixius clan. The army consists of a few dozens clan members - the strongest and fiercest.
Only Surina was chosen for more then just her strength. She had something that was vital for the moral. She was a chef. Some called her cook - no. a Chef. She invented new recipes, and was and still is, in search of new and exciting flavours. Having the ancestry of a green poisonous dragon, she bares some resistence to poison - so as far as she knows, everything is edible, at least once.
Thus, she was nicknamed "FingerLicker" - everything she made caused one to lick their fingers.

Her parents have recently past away of old age. Nothing that caused her too much grief, they were well past in their 8th decade. But with them joining the ever growing line of dragonstarts - she was now left alone. Finaly, she was free of taking care of them.
She requested to go out on a journey to find new flavours for her cookings, and promised to be back within the year.
Writing Sample
How did Norixius Surina meet Cassandra?
By accident.

Norixius Surina camped a few hours’ worth of walk from the city's gates. The sun was setting, and darkness would soon wash over the farmlands. She was quick in arranging a small fire, with an iron pot hanged over it. Within said pot cooked a lovely rabbit's stew. Some roots, some spices, a bit of wine within and some in a jug in her hand. What more could an adventurer such as herself want more?

The screeching sound of spinning wheels against wooden poles came to her ears and drew her attention. A carriage came into view as it was driving along the road, towards the city. The Dragonborn barbarian heard the vehicle coming to a stop, which made her reach the hilt of her Greataxe with her left hand as her right one reached a javelin.

A woman dressed in green and white dress came out of the carriage. “Jeffry, allow me to aid you and the horses – we would get there faster this way”
Surina calmed down and went to stir the stew – least it would burn!
The woman reached into a small pouch strapped to her belt and rummaged through it. “Oh no. I am out of dried fireflies! I am afraid I won’t be able to help you after all. Sebastian, I fear we will need to camp here tonight.”

Surina tilted her head and listened to the two exchange.
“We can’t Cassandra, we are in a hurry, you know that. They will manage in the darkness”
Cassandra frowned, and was about to step back onto the carriage when Surina stepped up, and offered a small bag of toasted fireflies. “I have some left if you want”
Cassandra had only now noticed her presence.
“Erm… what is it you are offering, exactly?”
“A snack! I roasted them myself, on an open fire, with some paprika and salt – Delicious! Here, try some!”
Cassandra found herself smiling and replied in an amused tone “Oh, I did not mean for eating, I need it for a spell.”

Surina’s scaled eyelid blinked.
“I did not know they could be used for spells. Perhaps it could still be useful?”
Cassandra’s curiosity got the better of her, and she reached for a roasted firefly.
She went back to the carriage, and with a few graceful swirls of her arms, the pole holding the lantern which seemed broken, began radiating bright light.
“Ha!”
Surina smiled and clapped.

“Thank you miss....?"
"Norixius Surina ma'am."
"Let me repay the kindness. Are you traveling to or from Baldur’s Gate?”
“To.”
“Wonderful. Join us?”
“But… the stew.”
The next hour the whole group – Cassandra, Sebastian and the driver all shared Surina’s wonderful rabbit’s stew. Once they all finished licking their fingers, she joined them for the ride.

During their ride, Cassandra had offered Surina a job as their personal cook along the way. Seeing the weapons Surina carried, she realized she was lucky to get two for the price of one.
Features & Traits
Damage Resistance - You have resistance to the damage type associated with your draconic ancestry.
Breath Weapon (Poison) - Use a 15 ft cone of Poison Vs a Con saving throw with a DC=8+Con(+2)+proficiency bonus(+2)= 12. 2d6 dmg (half if saved). Regained after a short or a long rest.
Entertainer Routines -Storry teller - Every Recipe has it's own story.
By Popular Demand - You can find a job as a cook in every settlement you come across - gaining free lodging and meals for the same night. In addition, those that taste your food, tend to like you.
Rage - Lasts for 1 minute - 2/between long rests.
While in rage: Advantage on STR saves and checks | Bonus damage of +2 when using STR to determine a melee weapon's damage. | You have resistance to bludgeoning, piercing, and slashing damage.
Unarmored Defense - Your AC is equal to 10+DEX+CON.
Other
In (D&D 5E) The Tyranny of Dragons - Closed → 1 yr ago Forum: Tabletop Interest Checks
sorry for delay, hopefully il be able to post my char tonight
In (D&D 5E) The Tyranny of Dragons - Closed → 1 yr ago Forum: Tabletop Interest Checks
Do we start with those? no right? when should we get those?
In D&D 5E: Dungeon of the Mad Mage → 1 yr ago Forum: Tabletop Roleplay
When Lin had finished her song, she bowed, and grabbed the coins she collected, tossing one in the air, tugging on the rim of her pocket, and it landed ~~~riiiiiight in there.

She kept playing quiet notes, and smiled at her friends. "Evening..."

The music stopped for a moment, as she counted with her fingers, pointing one at each - thumb for Lauk, "One..." Index finger for Aurix which she had noticed, pointing in her direction "Two!" then the middle finger for Jhimas grinning amused at him "Lucky number three!"

"We two short, aint we? a monk... and a hunter. hmm... sounds like the opening line of a joke... what was it?" She tapped her chin trying to remember.

she then waved that finger in Jhimas's and Lauk's direction.
"I know! here it goes!:

A monk, a hunter, and a druid go into a tavern.
The hunter orders a pitcher of mead, and three jugs.
The Innkeeper offers them three metal glasses.
The hunter asks - Who wants a bit (=beat) ?
The monk said - 'I dont drink'
The druid said - 'I dont do metal'
GET IT??"

She laughed to herself, shaking her head, while going on with her playing.

A smile formed on her lips. She placed a hat on the table, because why not? she could earn some coins with this.
Then, she began playing, interweaving her melodic tones between those of the halfling's, jamming her way into the crowd's ears.
Soon, the halfling was quite taken with the sound and skill the Dulcimer's player, and came to a cease.
But it was too late. Lin was already too deep into her own playing. Her eyes were closed, and her entire body moved along with her playing.

The music shifts to a more structured tone
She then broke into singing, adding her voice to the mesmerizing show:

Her voice was soft and gentle.

Every now and then, a person would come, nod in gratitude and place a coin or two in the hat. She would return that nod, offfering a bittersweet smile.

At some point a gnome man tried to sit on a chair around that table, and she moved in a quick movement to block his way with her leg, -not- stopping her singing nor her playing.
© 2007-2017
BBCode Cheatsheet