In CyberPunk Fantasy RP Idea → 3 mos ago Forum: 1x1 Interest Checks
I had an idea of an RP that I would like to try with a partner that like to do it with me.

The gates to Oblivion 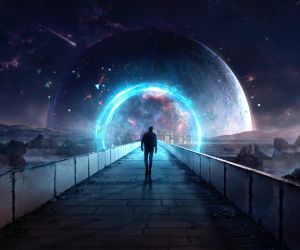 A long time ago the world was cloaked in the mystery of what humanity could do. Humanity showed the world and the world of the supernatural that they truly were the top dogs. Humanity wiped out the world of the supernatural. No more werewolves, no more dragons, angels, or demons. Just humans and their greed for power. Till in this dystopian world, a lady arrived, a traveler. She is a stranger to this city, but she is not a stranger to the dangers they all pose to her. She wields only a katana and the clothes on her back to keep her safe. She finds refuge with a small group of humans that take her in and offer her protection from the government. She repays them every day by.....new things. Every morning they take up to the food on the table, clean water, working lights as if she brought good fortune. But none of them know who she is or her story. Why they don't know if they are housing the very last dragon .....A celestial dragon that came in form of a human to make the world a better place. But can they trust her? Can she really change it? Only she holds the key to the gates of oblivion, can they change the world?

This RP would be a double UP with partners.

Feel free to give ideas and such.

I ask that you can write more than a paragraph.

Marvel ! Marvel ! or Percy jackson, BUT MARVEL
In 300 Rise of Empire Roleplay {CRAVING} Other things included → 4 yrs ago Forum: 1x1 Interest Checks
Bump
In I am Azul The Greek Weapon → 4 yrs ago Forum: Introduce Yourself
@Iuniper

Very true shall look at them all and see if any perk my interest
In I am Azul The Greek Weapon → 4 yrs ago Forum: Introduce Yourself
@Iuniper

I don't know I think just the whole the people in that time seem to show the most resilience and stubbornness in the face of doom or danger and the stories that cake from that is something amazing.