@RogerD Oh, I see. Thanks for clarifying. I might change that part then.

It is more to keep play balance really.
Flash from the comics interacting with a Time Lord wouldn't work too well, nor would a Kryptonian from the comics.
But a Kryptonian from Supergirl (tv series) would make a Dalek a viable threat (wee see here get injured by high-tech weaponry).
In Heroes of the Multiverse (Crossovers) → 3 yrs ago Forum: Casual Roleplay

@RogerD Alright.
What do you mean by 'no comic power level'? I could change that, I just haven't get the point.
I've read the comics, I know these characters, and they really don't have any superpower, just a ton of abilities, and I didn't want to change that part that much for I hoped to be as loyal to them as possible in the rp.

What I mean is that we are using the films and tv series for power levels - not the comics.
So someone playing a Kryptonian would not gain the power levels from comic books, just those shown in the Supergirl tv series.
In Heroes of the Multiverse (Crossovers) → 3 yrs ago Forum: Casual Roleplay

@RogerD
I already posted on the Characters section, hope that is fine. Let me know whether you'd want me to change something in the CS or anything.

Can I be the Flash?

Fully expected someone to pick an alt. version of tv Flash, so no problem there.
In Heroes of the Multiverse (Crossovers) → 3 yrs ago Forum: Casual Roleplay

Can Characters Be Canon or no?

Don't have to be.
If you create an OC, go right for it.
In Heroes of the Multiverse (Crossovers) → 3 yrs ago Forum: Casual Roleplay
Maybe your version of Selene is actually undead like Dracula Unbound. Your Ben Grimm is actually an Inhuman that underwent terrigenesis, Green Arrow is actually an immortal that was originally Robin Hood. Obi-Wan was a jedi, but then left and found an order teaching MCU Mystic Arts. I could keep going, but I'm sure you get the idea?
In Star Trek-Galactic Refugees → 3 yrs ago Forum: Casual Roleplay
Premise
This is based around the pilot of the TOS, in which Kirk and crew did not journey within the galaxy, but into the Galactic Void. As such this will follow in that notion, not that the galaxy is totally explored, far from it - just that it made sense to travel outward as well as inward - and Kirk and crew did the former. Cue five year mission.

Plot & Idea
This place around the 2375 time, and an Omega Detonation causes subspace to collapse over almost a thousand light years. Parts of the Federation collapse, and with no FTL - not even communication there is no way to prevent it. A wormhole opens near a Starbase, various investigations come to the conclusion that it leads to another galaxy entirely, one nearly ten million light years distant. Unfortunately the wormhole only has a life expectancy of about one year, so it is decided to see if it is possible to transfer all personnel, Starbase and planet to the other galaxy. But first they need to run recon. With little to lose they gather up whatever ships are in the Starbase, and an old Museum, full of ships - and while not all are up to current spec will still fly. With little to lose they decide to send over a Task Force to investigate and see if it is possible to find a habitable planets, and find and scavenge whatever technology they can find, and use.

Ships: Trek-Orthos
Constitution Tree: Ships-Orthos
Few extra ships in here for which there is not definitive Orthos: Ships-Picture

Players can pick either Constitution, Excelsior, or Galaxy, or Sovereign class variants. All but the oldest ones will have transwarp drives.

Anything really large would be off-limits, but that does not mean it cannot be built later on.

Players will be allowed to build new ships, find new and interesting technology and incorporate it.

Now I will include a host of other ships in the Task Force, old & new.

Timeline
During the 2280 the Transwarp experiment was a complete and unparalleled success which resulted in starships travelling far faster than they ever thought possible. Ships that were at that time approaching the old warp ten barrier (forget the TNG scaling), which resulted in the vessels that followed as being able to reach warp 12+. Whereas in the Prime timeline they regularly replaced ships, this does not happen here, and older vessels are regularly overhauled and given up-to-date equipment and weapons, their only problem is being under powered when compared to later ships of the line. In order to get around this, they kept in use for inside Federation space, whether it be peace keeping, transportation of materials or supplies.

Back Story
The invaders came from another galaxy in black bio-techno vessels, some cubes, other diamonds, spheres and such. They came to conquer and exterminate life, they did not bother with capturing any survivors, only killing. Ships outside of the galaxy found that even elder races were targeted, numerous Metron and First Federation ships were destroyed, planets and all. It was almost like the World-Eater that requried the sacrifice of a old Constitution vessel, only a thousand times worse. It was believed that a Metron vessel - in desperation, inside the Milky Way triggered a Omega detonation, collapsing subspace rendering all superluminal travel impossible.

Rules
No Treknobabble. Think along the lines of nuTrek, but with better technology.
No transwarp beaming....yet
Pick one ship
No arguing.
My word is law
Now actions will have consequences here, so be careful.
Players - i.e. their ships will die, but there will be others that can be used as replacement.

Opening Post
Admiral Sanderson looks on his dark hair swept back, his beard neatly trimmed. Even so his pristine appearance seemed strained, tired even. “A thousand light years have been cut off from subspace as a result of the Omega explosion – the worst incident in Starfleet’s history, and even though we were not to blame for it, the cost came high. The whole solar system of five hundred million inhabitants, plus those serving aboard starships were cut off from their families - a majority of which were within the detonation zone, albeit light years away. Any chance of seeing them or reuniting with them – gone. Even vessels travelling at light speed would take years….” He lets that trail off.

Some Captains can be seen whispering words of concern about never seeing their families again. Numerous pads lay on his desk, with a frustrated gesture sweeps them onto the floor, in a rather dramatic gesture, immediately silencing any comments.

“I’m sorry to have to say this, but we can as yet find no way to reverse the effects or even to get a transmission to our families to other systems. We are hopeful that something will come to fruition within a year.”

He turns, placing his hands behind his back. It does not take a counsellor to know that he is gravely concerned about something. Suddenly his pacing stops.

“By now, most if not all of you will know that a wormhole appeared in the system, concealed behind one of the moons. We honestly have no idea if it was a deliberate act by the Metrons, or something else. We have sent probes through and can determine only so many things – we need able bodies to do what we do best.”

Nods can be seen from other Captains in the room.

“I know most of you are itching to do, something” he rasps, his throat clearly hoarse. Most of you suspect he has rehearsed this speech a dozen or more times. He walks to the replicator, ordering a glass of water. Taking a sip puts the glass down, his eyes, and his visage holds passion, strength.

“What we do know is this.” Holding his hand up, fingers splayed, folding a finger with each point.

“First, the wormhole leads to two galaxies in mid-collision – something we have never seen this close. Personally I wish I was Captain again and could go with you. He shakes his head sadly, “But I can’t.”

Pointing at all of you – “That is your job” he says authoritatively.

“Second, both galaxies lay over three hundred million light years away.” He folds down his index finger.

“Thirdly, the wormhole is two-way, and will remain that way for at most one year. After that we know it will be one way only – although we suspect we may be able to use the transporter to beam back, but there are no guarantees of that.”

“Fourthly - we need you to find ways to repair or find other means of superluminal travel.”

“Fifth, in the event that we cannot repair subspace or find other superluminal options – we’ll look at moving lock, stock, and barrel across to these galaxies. The distance will mean we’ll likely never return home or see our loved ones again.”

He folds his little finger. A mischievous grin spreads across his features. “It appears I have run out of fingers.”

Laughter can be heard from other Captains.

“We honestly have no idea what lays through the portal, only that subspace signals have been received by probes sent through. We know it is safe to send ships – but that is about it. All told we have about thirty ships in system at this point – many of you were ready to do what was required, to deal with the threat. Knowing that most of our ships would have stood little chance, the way I see it we’re on borrowed time.”

Captains can be seen nodding, in acceptance, in acknowledgement.

“So some of the ships we have are brand spanking new, others old – right out of the museums even. What I propose is to send a flotilla of around half a dozen ships through. Now let me make this abundantly clear – I am not going to order you to go, not right now. I want volunteers.”

Another pause, “I don’t want answers immediately – submit your ships by 0800 tomorrow.”

He takes another sip of water. “I don’t need to tell you, that if we have to up sticks, and move galaxies, we have a lot of lifeforms and quite frankly it would take years to move that many people. So we’ll be coming up with ideas here on how to do it. Those ships that act as emissaries will have two weeks before we send through reinforcements.”

Captain Ramirez of the Ascendance interrupts. “Why not send through all our ships though at once – it isn’t as though we are going to receiving visitors anytime soon?”

“Good question Geoff. Well the short answer is that if we send through a whole Taskforce I am concerned that whoever is on the other side may thing we’re about to invade, and could take that rather poorly and reactive in a manner we would rather avoid.”

“In the meantime, I recommend that all individuals with families not on the planet prepare a short message to their loved ones – just in case. I will send something too, stating what we intend to do – at least that way if we do move they know where we have gone.”

He pauses again. "Any other questions?" 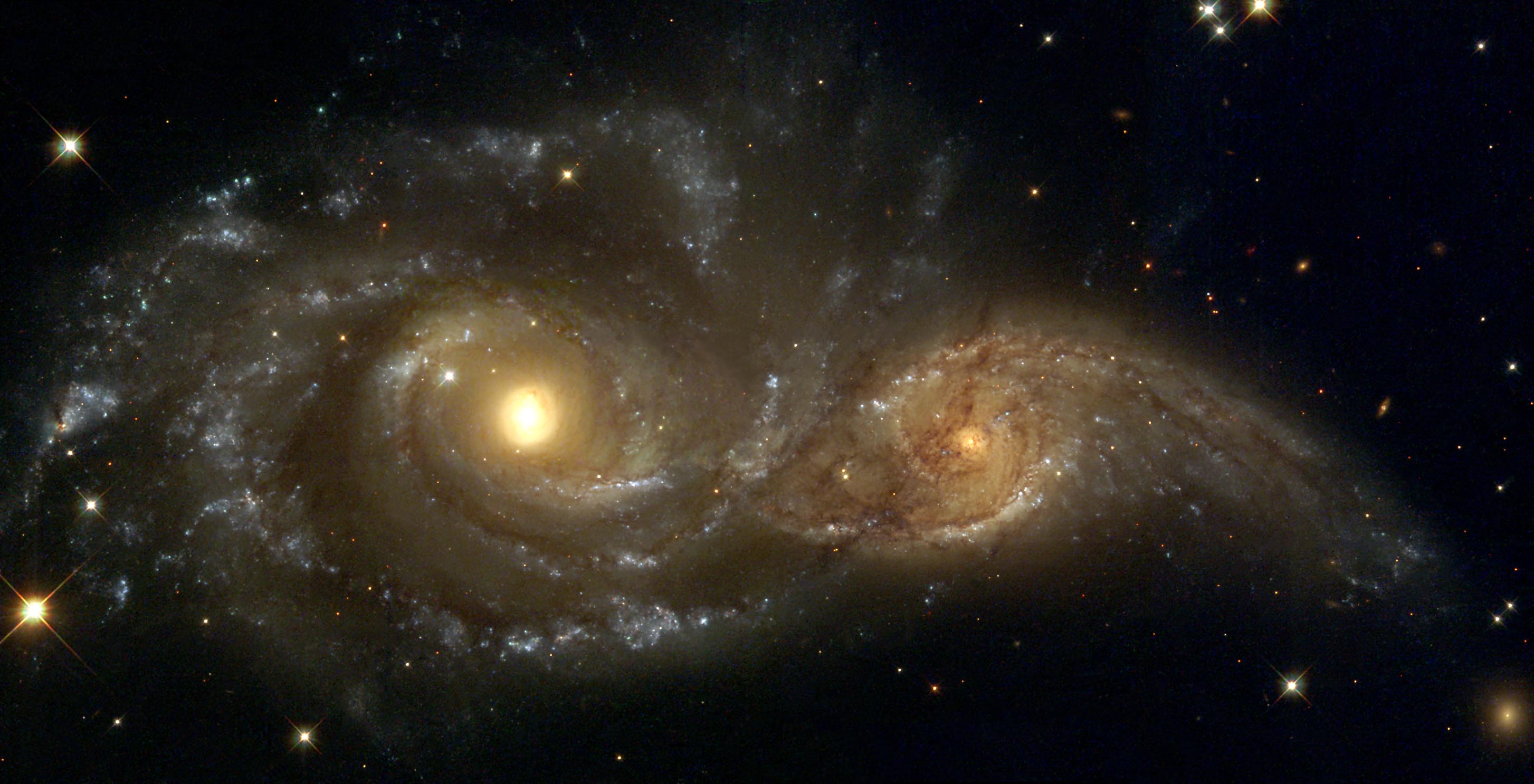 Brightest star on the left, next dim star in near the bottom and then the next one up a bit nearer the galaxy - this is where the wormhole opens up.