STATUS: Gonna be without power for a bit today, apologies if I don't speak much. 4 yrs ago 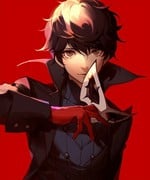 4 yrs ago
Current Gonna be without power for a bit today, apologies if I don't speak much.
5 yrs ago
Have a few days off. Look for posts for sure today & tomorrow!
5 yrs ago
Just found out an online friend I used to RP with passed away very suddenly and unexpectedly. Didn't know them super well, but the news is saddening all the same =(
5 likes
5 yrs ago
Family ate Thanksgiving a night early because of schedules. Will be tending to all my various posts tomorrow since I'll have time to do so!
1 like

Long timer roleplayer, been at it for... god, almost 15 years now all told. Hasn't been all sunshine and roses, but I like to think I've improved somewhat steadily as time has gone on.

I generally like to play older characters, or at least toward the higher end of an age range. Also, just about all of my characters are caring and protective in some capacity, even the rare meanie that I make.

I play a mixture of male and female characters. I myself am a guy.

Generally speaking I try to post at least once per week.

In Through the Doors of our hearts - Finished → 1 yr ago Forum: Casual Roleplay
Alexander

Alexander didn't need to ask if whatever Astrid did had worked. He could feel it all around them as the winds suddenly slowed and calmed. It was actually more than a little disconcerting; the howling tempest had seemed so natural when they'd arrived he'd assumed it was the standard state, but now that things were so calm and composed he could easily see he was wrong.

A portal opened shortly thereafter, and he didn't need two seconds to decide to leave. "And that's in the books!" he declared, "Who wants to join me for a tall mug of a- awwww, feathers, that's not a thing here."

"Dumb laws like that are why piracy is just better..." he muttered to himself as he stepped over and through.
In Through the Doors of our hearts - Finished → 1 yr ago Forum: Casual Roleplay
Alexander

And now the fun part began as everybody else started to take the jump one by one. First was Katarina, who made the jump easy enough, but missed her timing and started to slip the same way he had. He'd been prepared for something like this however, and quick as a whip he reached out and grabbed her by the arm to pull her back up. "No problem," he told her in response to her gratitude, "You'll have to teach me how to swim first."

Next came Astrid, who needed no assistance whatsoever. She actually moved quite comfortably, like somebody who was used to crossing the empty air. I wonder where she got that from, he absentmindedly wondered as the group continued. Sumi proved similarly able, in spite of her all sugar diet, but by this point he'd learned it was better to simply avoid questioning such things when it came to her. It wouldn't make any sense anyway.

Christopher and Kade were where the trouble started. Christopher slipped completely, and this time Alexander was too far away to reach out and grab him. with nothing else to try he whistled again, and to his amazement the wind answered him again and lightly tossed the other boy back onto safer ground. He was a little more calm when Kade nearly fell off; maybe it was the fact that he'd done it three times now, or perhaps something else, but he whistled much more casually to help the groundskeeper up with the air.

"I don't know how I'm getting used to that," he said out loud, "This is really bizarre..."

After that, he could only watch as Astrid did her work.
In Through the Doors of our hearts - Finished → 1 yr ago Forum: Casual Roleplay
Alexander

"Alright then," he said as got up, "I'll jump first since I can kind of tell where they are. Then everybody else can aim for me." With that he squared up and looked toward the first platform. He watched the apple core as it moved for a time, then when he felt confident in the timing he took the cliff at a run. As close to the dropping face as he dared he coiled his leg and sprang forward, flying out into the the thin air with his arms swinging behind him for momentum. His other foot struck almost right next to the apple core...! Only for him to realize that it hadn't landed toward the middle as he'd hoped it would, but had tumbled closer to the edge of the platform- the edge that his foot had found and was only halfway on it.

With neither room nor time to recover and redirect his momentum, Alexander first began to slip and then to fall outright into the abyss! His eyes went wide with surprise and his mouth opened as he started to fall, but as he fell below the fog it wasn't a scream or a yell that came out. Instead, acting on raw instinct and well-entrenched muscle memory, his hand curled into a fist with his index and thumb curled out almost like pincers and flew towards his mouth which swiftly closed on the tips of his fingers and released a shrill whistle out into the air. He hadn't even paused to remember that Julie wasn't here; when you fell into the sky, you called for your bird. It was second nature for someone like him.

But before he could recognize that his feathered companion wouldn't answer his call and admonish himself for thinking that she would, something else responded instead. A massive updraft suddenly formed in the air around him, slowing his descent and then blowing harder still until it was propelling him the other way, back up toward the platforms! With a great burst of air and mist he erupted out of the fog again and landed firmly on the platform, smashing the apple core under his shoe as it rolled toward the center with the force of the updraft. His breathing was fast and hard in the wake of the landing, and it took him almost a full minute before he managed to get himself to his feet again. "Holy crap," he whispered to himself before shaking his head. "I am never gonna get used to that sort of thing. Right then, let's make sure I know where the middle is here..."

He took a moment to careful plot out the platform with slow, wary steps, stopping when his toes no longer had purchase and then counting his steps. First in one direction, then the other, until finally he stepped to a corner and recounted from both sides to place himself as close to the center as he could. "Alright!" he yelled to the others, "Aim for me, you should be fine!"
In Through the Doors of our hearts - Finished → 1 yr ago Forum: Casual Roleplay
Alexander

"Oh you've got to be kidding me..." Alexander nearly swore as he figured out what was happening. "I have good news, and I have bad news. The good news is, there is a way across."

As he spoke he stood up and fished into his pocket for the apple core from earlier. "The bad news..." he said as he closed his eyes again, listened intently, and focused in on the closest disturbance where the wind was butting against the nearest platform, and he kept listening until he deciphered its pattern. Once he had that in his head, he waited until it was about to reach a specific point, and tossed the apple core out to land on the platform.

"Is that."
In Through the Doors of our hearts - Finished → 2 yrs ago Forum: Casual Roleplay
Alexander

Alexander winced at the mention of winged mounts. He'd been so close... but, he thought, this was no time for such things. They were stuck again. True, Julie would make this a trifle. Probably. Assuming it was actually air and not something else entirely. There might be a way to determine that, and find a path if it was there, he started considering, but it was a long shot.

"Well... hmm. Might be worth a shot, quiet down for a minute," he said as he stepped forward, as close as he dared to, closed his eyes, and listened for the wind. If this was a space it could pass into, he would hear it flowing that way, and if there was anything obstructing it, like a walkway or a tangled mess, with utmost concentration it was possible he'd hear the air whipping around and through it...
In Through the Doors of our hearts - Finished → 2 yrs ago Forum: Casual Roleplay
Alexander

"Allfather?" he asked as the bells became obnoxiously loud and disruptive. "What does that..."

"EVEN MEAN?" he ended up yelling overly loud as the bells suddenly ceased. The volume of his own voice in the empty air took Alexander by surprise and made his ears ache even more than they did before for a moment. "Ow..."

"Oh, right, I never mentioned that," he said in response to Katalina, "Back home we have a Santa of sorts, and he's friendly enough, but he's also buff as hell and wears an eyepatch. He gives gifts to the ships he visits, but only if a member of the crew agrees to fight him and impresses him enough. And, well, one year it was me who got nominated and... let's just say my midsection aches whenever I hear sleigh bells."
In UNFAIR MONSTERS [Spots Open] → 2 yrs ago Forum: Casual Roleplay
Hi, so sorry for just straight up not being here. From the looks of things, my current schedule isn't really allowing enough time for me to dedicate adequately to RPing. So, with all due courtesy, I think it's best that I also withdraw. I hope the project proceeds well, and if I ever get the time to come back to the hobby I'll look forward to potentially playing with any and all of you in the future.
In Through the Doors of our hearts - Finished → 2 yrs ago Forum: Casual Roleplay
Alexander

There was a sudden release of tension as the fog seemed to shift while not actually moving. The cry of birds and the gentle blowing of the inviting wind faded away, but was soon replaced by something else. The sound of jingling bells made Alexander go from simply keeping a hand on his knife to fully drawing it and looking around nervously.

"Aw crap, not here, not NOW you one-eyed bearded bastard..." he said through a clenched jaw.