STATUS: Wow haven't updated one of these in awhile; out of town for the weekend. Will be back Monday or Tuesday. 6 mos ago 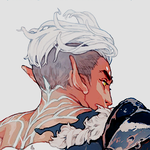 6 mos ago
Current Wow haven't updated one of these in awhile; out of town for the weekend. Will be back Monday or Tuesday.
2 yrs ago
Going to a con for the weekend! I will respond when I get back!
1 like
2 yrs ago
Sorry for not responding much; it seems the site is down whenever I actually have the time to respond.
2 yrs ago
Might be MIA for a few days, sorry!
2 yrs ago
Going to L.A. Comic Con this weekend so sorry for the lack of response!
2 likes

Just a couple basic things;
-I tend to write anywhere from one to five paragraphs, depending. I am fine with one paragraph responses, it's just one-liners I don't care for.
-My characters tend to swear (as do I), so if that's an issue, thought I'd give you a heads-up.
-I am a complete sucker for romance, and while I do prefer to play male characters, I am totally comfortable playing female characters so if you want to do a FxF story, I'm down.
-Sorry, but nobody under the age of eighteen.
-I prefer to RP over PM
-I like being friends with my RP partners, so I enjoy an OOC thread as well. It's not necessary, but I think it's a bonus.

So, that said, I've got a couple very vague ideas kicking around my head and I'm just really having the itch for some more 1x1s.

Pairings
-Hades and Persephone. Any variation. Female Hades and Male Persephone. They're both male. They're both female. Classical Greek setting. Modern setting. I don't care. I just really want to do a Hades and Persephone RP. I can play either of them.
-Hunter x Paranormal creature
-Vampire x human
-Vampire x werewolf
-Werewolf x human
-Angel x demon
-Demon x human
-Merperson x human
-Merperson x merperson
(Honestly, just, throw paranormal creature ideas at me. I'm good with basically any, these are just the ones that popped into my head)

-Alien x human
-Time traveler x immortal (can be set in basically any time; historical, future, I love both)
-Robot x human
-Cyborg x human (can be sci-fi, can be post-apocalypse - which I'm a sucker for) Name: Rosalind Adaeze
Age: 18
Parent: Persephone
Abilities: Just as Persephone has a dual nature, so does Rosalind. She can see and speak to ghosts, but has no control over them. She does, however, have control over plants. She can bring them to life and make them grow.
Personality: Rosalind is a bit on the quiet side; she's very sweet and gets along with nearly everyone, but she's more of a listener than a speaker. It's her anger you have to look out for. Piss her off or hurt somebody she cares about and she becomes terrifying.
Short Bio: Rosalind was raised by her father who never told her much about her mother. It was always weird to her that her mother wasn't in her life, and she sort of assumed her mother had died. It wasn't until she was about ten that her father realized all of her 'imaginary' friends weren't imaginary, and all of their plants were overgrowing without him touching them. Persephone had told him who she was when they were together, but he hadn't really believed her. He did now. He did his research and found Olympus Academy and sent Rosalind there. She's been attending for eight years now.
Extra: Has a weird fashion sense that is a mix between flower-child and goth. Somehow, she pulls it off.
In Academy for Children of Greek Gods? → 3 yrs ago Forum: Casual Interest Checks
@ohsosaiko I'm fine with either modern or historical. Both could be fun. Just sort of curious how to differentiate it from Percy Jackson (granted, I love PJ, so I'm not complaining.)
In Academy for Children of Greek Gods? → 3 yrs ago Forum: Casual Interest Checks
@ohsosaiko This could be interesting. Were you thinking more modern or historical?
In Cyaиide Suиs → 3 yrs ago Forum: Casual Roleplay
@TheMadAsshatter @pugbutter

Neasa wasn't all that reassured when Scott said they weren't going that way - sure, they weren't, but who was to say the strangers didn't decide to turn and follow? She lowered her gun slightly, but kept them in her peripheral, just waiting for them to try something.

"Mostly by the border," she confessed, shrugging her shoulders. "It's easy when you first get inside, after that though? S'all just dust in the wind, really. Came from the north, well, obviously," she said, rolling her eyes and letting her Irish accent tell all. "But that's about it."

She was glad that she had been keeping the group in her peripheral when they suddenly jumped and seemed to flee from the road like a flock of birds being chased off. "Hey," she hissed, keeping her voice low. "I think we've been spotted."
© 2007-2017
BBCode Cheatsheet