A Literal Body of Water

"Wait, you care about American football?" Danny asked, raising his eyebrow at Aselie as she walked past him through the door, slightly put taken aback by her choice in subject matter. He'd just been wondering whether asking her about the canceled ice hockey season would be unfair stereotyping on his part. "Uh, yeah, we sure are. Can't say I got a lot of practice in the past few months, but-"

Then, the creaking door, the rush of cold air. Instantly, Danny felt himself thrown off his balance, felt the energy in the room change. He looked around - some of the teenagers all gathered had reacted, some hadn't, and come to think of it he did think it was slightly strange that so many of his classmates were here - but none moreso than William Morgan. Aselie caught note of it too - he looked like somebody had just walked over his grave, even moreso than usual.

Danny had always tried to be nice to Will, on the infrequent occasions when they interacted. Some of the other guys on the football team liked to pick on him, put him down for being an oddball, but Danny had never taken part in that, even if he didn't do as much as he could have to stop it. The poor kid had been through enough in his life - someone ought to be nice to him.

He watched the scene unfold silently, stepping slowly forward after Will even as he felt his skin prickle into gooseflesh. Aselie asked if Will was alright, Activist Astrid wondered aloud why they were all there, and everyone's favorite Prescott told Will - a little rudely, in Danny's opinion, that there was no reason to investigate. For his part he... wasn't sure what to think. It was a little creepy, sure, but old buildings always were. And that flash of movement from down the stacks... he'd imagined that. Right? Will, horror obsessive that he was, was having a flight of fancy, and it was rubbing off on Danny. Right.

Silently, he held out a hand to mollify Abby, and started off walking. "Hey, Willy," following after the boy as he crept down the stacks, making a brisk pace to catch up with him and reaching out to tap him on the shoulder. "This is kinda creepy. What do you say we get out of here, and... you can tell me if that new horror movie's worse seeing? What's it called, Slaughter Night or something?"

He told himself his desire to pull Will away was for the boy's own benefit, pull him away from a flight of fancy, get him talking to people. Deep down, though, Danny knew he did not want that door opened...
In Everbrook: A Teenage Mystery RP → 2 mos ago Forum: Casual Roleplay
Gonna wait for a response from Aselie before I post.

I daresay the game is afoot.
In Everbrook: A Teenage Mystery RP → 2 mos ago Forum: Casual Roleplay
@Kuro

A wizard is never late, nor is he early! He arrives precisely when he means to.

I'll be more punctual going forward, as well as more present here in the OOC. Slightly tumultuous few days that look to have settled down for now - would have said something if I thought I wasn't going to make the deadline, though.
In Everbrook: A Teenage Mystery RP → 2 mos ago Forum: Casual Roleplay
Danny

Danny pocketed his phone and sighed, scratching the back of his head and glancing both ways down the empty street. He'd been mentally preparing for the cancellation of the team's two-week training camp in June ever since the quarantine had started, but that didn't make it any better now that it had actually happened. The camp was a chance to get away from home, have a good time with the guys on the team, and the annual party at Mick's Dad's house never hurt. Of course, it wouldn't all have been fun and games - there would have been college recruiters at the camp watching for talent, and though Danny had already talked to a few, impressing more would have been an important opportunity. Still, he supposed it could have been worse. Lot of people had gotten a lot worse from the virus - if missing football camp was the worst thing that happened to him, he reckoned he'd made it through pretty well.

Danny kept walking down the street, one hand on the strap of the bookbag he'd slung over his shoulder. Guess this meant he'd start work early this summer - Jack'd probably welcome the extra help and the diner, and maybe he could put the extra cash towards something nice for himself. Not that there was much he wanted at the moment, but maybe he'd think of something. Couple days busboying could pay for a few movie tickets - who knows, maybe Megan from third period would want to go see a movie-

A car horn blared through the air, and he jerked back as he was nearly pancaked by a red muscle car blasting down the street in front of him. "Jackass!" he shouted on reflex, though not quite loud enough to be heard, as he watched the car carry on without slowing and vanish over the hill. Man, no wonder this town had so many traffic accidents, if people were driving like that.

Danny shook his head and kept walking, turning the corner and coming in sight of his destination. He wasn't a big library guy - not because he didn't like reading, he just didn't have much time to go - but he wasn't here for himself. His little sister had been very worried at the prospect of losing her library privileges by keeping books out overdue, so while she was out at piano practice, he was here with a backpack full of Percy Jackson books to return. He didn't mind, of course - it wasn't like he was all that busy, and it was a nice day for a walk. 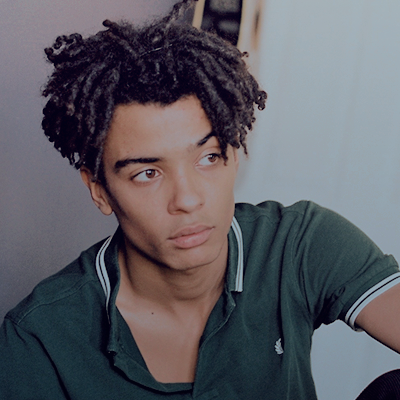 Personality Traits
Good-natured: Danny is, ultimately, a basically nice person who’d like to get along with just about everybody. He’d never put anyone down or try and make himself out to be superior to them, and he’s unflinchingly polite. At times, this overlaps with a kind of severe conflict aversion – though you’d never guess it from seeing him on the field, he hates interpersonal conflict more than anything, and will appease, acquiesce, or back away on anything just to get out of it.

Popular: Star wide receiver of the football team combined with his generally positive attitude means Danny’s a pretty well-liked guy. His family is respected around the town, and he gets along pretty well with the Everbrook High ‘in crowd’. Those on the social periphery might consider him ‘just another popular kid’, and in truth he could do more to curtail some of the bullying his peers engage in (see: adverse to conflict), but most would have neutral-to-positive feelings towards him.

Smarter than he looks: Danny’s not a leader, preferring to have someone else call the shots. It’d be wrong to assume that he’s a dumb jock, however – he’s a deep thinker, and he’s always paying attention. In school, he’s a middling student – he’d be better if he had more time to study, and math continually evades him, but his command of history and English are pretty good, and he’s got a decent mind for problem-solving.
Family History/Backstory
Danny’s lived in Everbrook his whole life. His parents met in Portland, and moved out to Everbrook to start a family. Now, his father is the chief of the local fire station, and his mother works as a public defender; they’ve been living in Everbrook for 20 years, and their active presence in the community as well as the nature of their jobs means that they’re well-regarded by the community as a whole. He has two siblings – an older brother, Jacob, who’s currently attending college in Massachusetts, and a younger sister, Anjelica, who’s entering her second year in middle school.

As soon as he was old enough, Danny tried out for the Everbrook High football team, and he’s risen to prominence as their star wide receiver. He’s already been approached by scouts from several colleges interested in giving him a scholarship to play for them – he’s got friends, a normal family life, prospects, hobbies. Seems like there’s nothing terribly strange coming up in his future.

Right?
Other Info
Has a driver’s license and his brother’s hand-me-down pickup truck. Works summers as a busboy at a family friend’s diner. Faceclaim is Marcus Sivyer.
© 2007-2017
BBCode Cheatsheet