STATUS: Don't worry, you'll get better at TF2 with more practice. 16 days ago 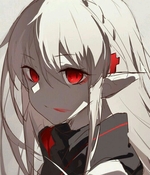 16 days ago
Current Don't worry, you'll get better at TF2 with more practice.
5 likes
18 days ago
Elvis is flipping burgers at a McDonalds in Des Moines.
1 like
19 days ago
Use Discord on your mobile device by using its browser app in Chrome. Remember to check the box for Desktop Site in the tav's settings, else you won't be able to do much.
1 like
28 days ago
The best 1x1s end with cards haphzardly scattered across the sidewalk as you've sent your partner to the Shadow Realm
8 likes
1 mo ago
It's the border patrol what keeps me out of the Amazon.
1 like

Hi there. I'm Sylph. Twenty two years old. Pretty friendly, I'd like to think. I don't have much to say most of the time, but I'm always willing to chat.

After some fumbling around I got Discord to work on my cellphone, albeit it remains somewhat inconvenient for me to use. Therefore, I prefer using the site's private messages over it whenever possible.

It was fair to say that the situation had developed from a mere curious happening to a full-blown incident, but that'd barely be scratching the surface of what was about to transpire. Fueled by the presence of Komeiji Koishi, Hata no Kokoro was very determined to solve this incident before she did it. She'd beat her, and have her eat her humble pie, and have her apologize, and she'd be super magnanimous and forgive her because that's what nice people are supposed to do and hen Koishi would cry because of just how gosh darn NICE Kokoro was unlike her who was mean and evil and stole people's masks.

It was also fair to say that the poker-faced menreiki was positively brimming with competitive energy, judging by the fox mask atop her head, that tacit pressure akin to a coiled spring about to fire off and the glances she sneaked at Koishi's direction. That's why a veritable burst propelled the girl outside of the room once the satori did so as well. Kokoro heard where they were going, so it was now a matter of getting there first and getting the scoop first, even if it meant weaving through and inbetween the other incident solvers.

So, as stated above, this is a Grail War where the aim is actually not necessarily to kill literally every other participant, but rather to get all of the pieces of the Grail in some way or another. All Servants are Japanese, and extra classes are permitted on a case by case basis (Ruler, for instance, is probably out entirely because of its inappropriate role here, Amakusa would have to be something else.)