In Tales Of Shizuyama (Far-Eastern Monster Girl RP) → 1 day ago Forum: Casual Roleplay
Alice meeped, as Shizuka appeared out of the blue - a Human, nothing more, nothing less, and yet she never felt his approach. How? That was the question. Could a Human possess the ability to exist outside of the sense of a Mad Hatter, so swift and clever of thoughts and sense? Such a revelation was frightening, genuinely, in its own right, and put Alice on a defensive backstep. Her stance changed; ready to parry with [Rainbow]...

"Infighting among taskforce members will not be tolerated. If you've disputes, take it up with me. Besides, neither of you look like you're in any condition to be fighting right now. Perhaps we could all talk this out in a more civilized manner?"

"Civilized? An Orc? You’d be sooner to see a flat-chested Holstaur," she says, keeping Carroll steady. "Don’t press your luck with this one..." he says, "Avoid the Human, and stay the course on the Orc... Use your Madness."

Alice nodded, and shifted her stance from [Rainbow] to [Eruption], and stepped forward. However, Shizuka occupied the square she needed to be in to bypass Gringor to hit him unguarded, so she couldn't use her back-attack on him in the traditional sense. Instead, she would use it to generate a fire before Shizuka, by making a right angle turn, and adjusting the line. In the same instance, she would use [Eruption] again to flash step into the flame pillar, but bury the haft of Carroll into the ground, only to wrap the flames in [Shatter], and bottle them for a sudden flip of the Cursed Blade, and a breezy blade of wind to deploy within from [Zephyr] - resulting in the blazing, thermal explosion of a well-fed fire that took itself and her in the direction of the sky.

Above Shizuka and Gringor the shadow of a much larger, more muscular Alice stood in the sky on the lengthy shaft her axe, and uttered the spell, "Heavenly Strike," as she kicked off Carroll, and realigned him to slam into Gringor's own raised axe.
In Magus Reaver: A Tale of Swords and Sorcery → 3 days ago Forum: Casual Roleplay
ATTN:@AzureKnightAs she left the meeting hall for the library, Scarlett shut out the world around her - doing so helped her to dull the pain of the Maiden’s intrusive conversation. As such, the rebuttals of Ruecian and Rozemyne went ignored in the absolute -- not that she would have cared, regardless. They were willing to deny the march of progress - impede upon the empirical path of growth by way of practical experience, and make excuses as to why.

Though, their words were like failed experiments; meaningless, pointless, unable to teach her anything she did not already gleam from her observations. They were strong, and they believed themselves in the right - such was the power gifted to the strong by themselves, for the weak could not defy them. Evelyn was weak, and thus, she cowed before her assigned betters; those said stronger than her, and holding that strength above her like a weighted sword - ready to drop and cut her in twain should she speak up or act out in defiance.

In a way, Scarlett respected the cold display of the bestial hierarchy that Humans had upheld and evolved since their long-lost days as Primates; it was tried, true, and hard to defy - both in nature and word.

Betas followed.
Simple-as.
However, the scientist half of her psyche raged, and despised them for it. After all, it was Evelyn’s born right to suffer the potential slings and arrows of enthusiastic miscalculation, and if she should weather the storm and emerge - unbroken, or not - it would be for her betterment.

This held true, even for Scarlett, in this moment, as she attempted to pull her face out of the deep-set grimace that marred her passably beautiful countenance more so than her scar.

Poser. Playboy. "Pervert..." Scarlett muttered, as she mustered the will to look up at Kiff. "I’m looking for information on the Makara species," she says, finally looking up, "For the moment, general information will have to do. I’m entirely unsure if I’ll be allowed to set off, after telling off that self-important, blue snake and haughty, black witch in front of everyone."

Neither part of Scarlett’s fractured mentality regretted standing up for Evelyn in her own, flawed, but well-meaning way.

Hell, depending on his relationships with Ruecian and Rozemyne, Kiff might find humour in the horror of it.
In Tales Of Shizuyama (Far-Eastern Monster Girl RP) → 6 days ago Forum: Casual Roleplay
@PaulHaynek

Now, I'm curious, if there are monogamous monsters. Luna's reaction to (see: disdain for) and statement about Alice switching from Takeshi to Gringor promotes the idea that monogamy is commonplace and adultery is shameful for her species. It would be quite interesting for Alice to answer Luna's question and put viewpoint to task, as a highly intelligent member of the sporgy (+1 Pun) species known as Matango.

Maybe, pin that for later, if it comes up in an organic fashion?
In Tales Of Shizuyama (Far-Eastern Monster Girl RP) → 6 days ago Forum: Casual Roleplay

Decided to have a comm done and update Shizuka's look. 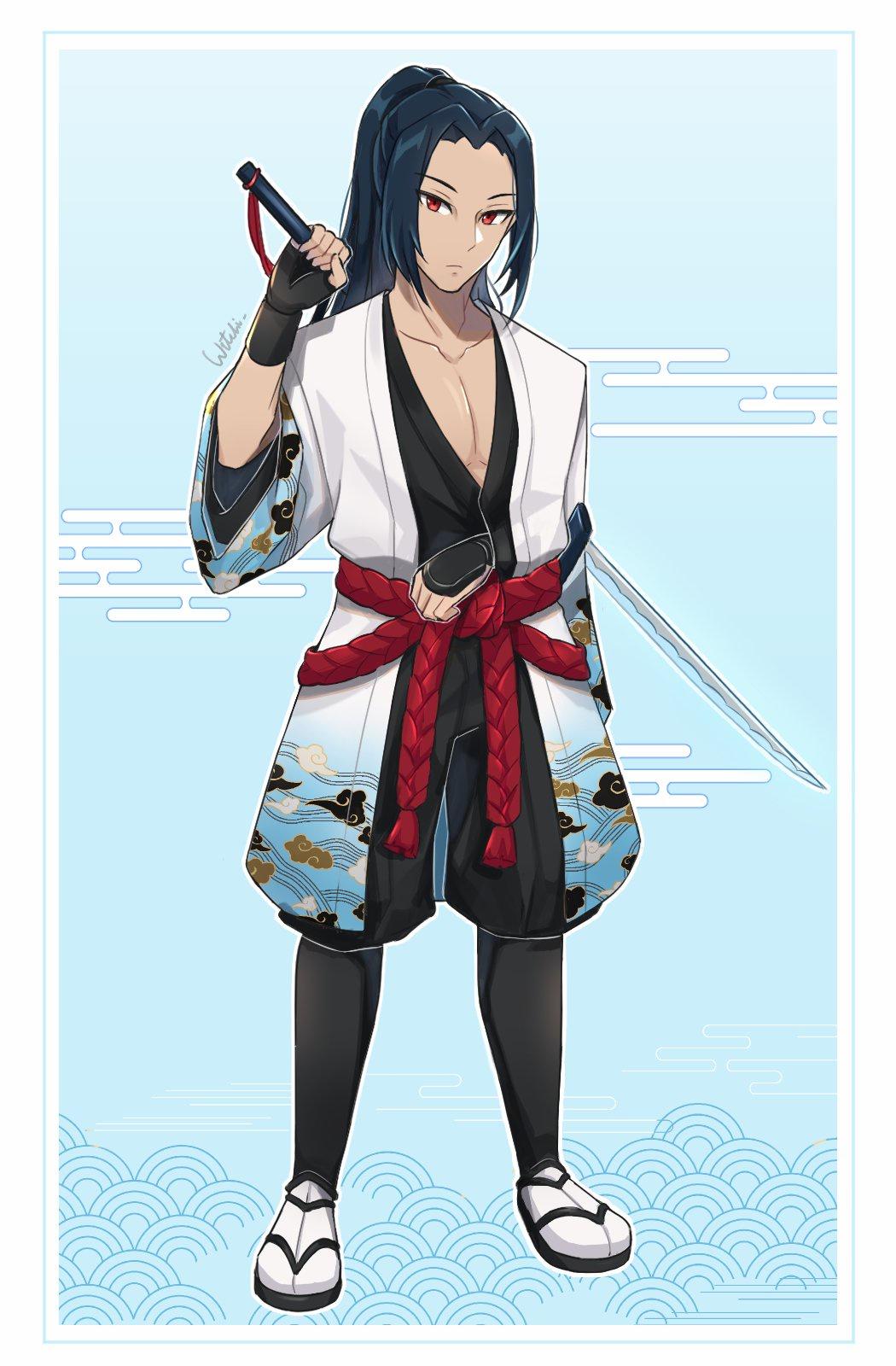 Ya boi pulled a flash step from across town to break up a fight. That Yondaime Hokage energy, right there.

"Pfft!" Alice sputtered, unable to contain the laugh that eked out of her. "A mate?! You?!" she asked, wiping her tears, "I would gain nothing from mating with a beta-class brute."

Alice couldn't help it, as she lapsed into a fit of mad giggles - absolutely insane amusement escaping her. Looking up, tears dripped off her cheeks, as she panted, actually breathless, and managed, "I didn't think Orcs had a sense of humour, but here we are. Do you think I'd want you for more than sex? What, did you think we'd fall in love? Please, don't flatter yourself."

Her head suddenly dropped and her eyes narrowed, "Lord Takeshi is more of a man than you, Orc, and he's barely matured."

There was no anger in her tone, no passion in her voice; she spoke, matter-of-factly, with the brutal bluntness of a Wonderlandian Monarch and the sharpened tongue of a Mad Hatter.

"Look me up and down if you please. Judge my form as harshly as you like," Alice says, drawing Carroll, if he truly wanted to fight, "but, I own this glorious femininity that shapes me," she took the Heavenly Strike stance, "Do you own that effeminate form that shapes you?"
In Tales Of Shizuyama (Far-Eastern Monster Girl RP) → 11 days ago Forum: Casual Roleplay

Or in a mamono's case they just flat out ignore it.

Alice does have a move that summons a plume of fire...
In Tales Of Shizuyama (Far-Eastern Monster Girl RP) → 11 days ago Forum: Casual Roleplay
And, this is how the Taskforce fell apart, as two tsundere smash and insult each other.
In Magus Reaver: A Tale of Swords and Sorcery → 12 days ago Forum: Casual Roleplay
Happy Thanksgiving to those that celebrate, and Happy Thursday, if you don't.
© 2007-2017
BBCode Cheatsheet