STATUS: That moment when some asks you genuinely if taxidermy has anything to to with taxes. I mean.... Sales tax maybe? 4 mos ago 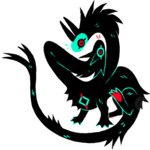 4 mos ago
Current That moment when some asks you genuinely if taxidermy has anything to to with taxes. I mean.... Sales tax maybe?
1 like
1 yr ago
Gonna try to get replies out but it's kinda hard. Out of state till 27th
1 yr ago
Looooong drive ahead of me starting tomorrow. Will reply as I can.
1 yr ago
Heaven got an ecstatic angel this morning. Bit too soon for me though. Won't reply for a bit
3 likes
2 yrs ago
Replys are gonna slow a little. Having some family... Issues.

Really only interested in new rps of the Skyrim variety right now. Just a craving I'm having. I don't have any set plots in kind, but if you have any I'd love to hear or we can hash something out.
In One x One - Release the Beasts! → 2 yrs ago Forum: 1x1 Interest Checks
*insert something witty*
© 2007-2017
BBCode Cheatsheet