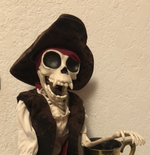 In CassyK/Truepirate → 23 hrs ago Forum: Casual Roleplay
“The bounty is by the king. He and I are rather at odds with each other, probably because I set fire to his palace and let his horses go free. Not to mention I punched him.” Elissa said as calmly as if she were describing the view out the window. If he wasn’t going to turn her in then she had nothing to worry about. She’d vowed never to go back to Spain after she had escaped the first time. Most of the wounds on her back were from that trip.

When he stated that she wasn’t an asset to her father she began to worry. If she was worth nothing to Joseph would he keep her? It’s not like she was a pirate like him. She’d gladly become one for him if he asked, but that wouldn’t happen as long as they were strangers. “Father never really cared for me. I wasn’t a son and my mother passed when I was thirteen, while giving birth to a son. My brother passed not long after her, only making father’s resentment for me grow. I sailed for his company to benefit both of us. I got to be free from him and he got more money, the only thing he cared about after my mother died.” Elissa said bitterly. “The man locked me away in Bedlam when I was fourteen, stating that I was crazy. I wasn’t. I was just lonely, I missed my mother and my best friend had just left without even saying goodbye.” She took another long drink. “In all honesty I’m not worth anything to you, especially now that you don’t remember me, but that doesn’t mean that I can’t help you. It’s like I said earlier, we both have a score to settle with my father. I’ll gladly help you get your ship back from him. Might do his some good to see that he isn’t untouchable. But…” She paused and met his gaze. “You have to help me in return and I don’t mean by letting me go.” She had to get him to remember her. If she couldn’t then she had to get him to trust her. Part of her worried that in order for that to happen she’d have to part with her dagger first. It was the one thing she had that he had given her. It was one of her few prized possessions, it and the necklace that had been her mother’s.

She had a deal in mind, one she hoped he would agree to but did have some doubts. He was the only one that could save her and the only one that could help her. He’d come back into her life at the perfect time, the only imperfect part of it was that he had no recollection of her. If he remembered her it would have made things easier, but of course when did things ever go easy for her?

“Can we make a deal?” She asked raising an eyebrow.
In CassyK/Truepirate → 1 day ago Forum: Casual Roleplay
That’s sounds great! I wondered about including her dad in his past but wasn’t sure how you’d feel about it so I didn’t say anything. I’m glad we both had the same idea!
In CassyK/Truepirate → 1 day ago Forum: Casual Roleplay
“I am Elissa Bishop,” she assured him. “Just not the Elissa Bishop you remember and not the one everyone thinks I am. I’ve grown up, Joseph, I’m not the scared quiet little thing I was when you knew me. I’m not a child anymore.” Elissa stood for a moment, ignoring the offered beaker and instead took the bottle from him before sitting back down on the bed. “I have been sailing for my father’s company since I was fifteen. I just turned nineteen yesterday.” Elissa took a long drink from the bottle before continuing. “As for fighting, you taught me almost everything I know, granted I learned more after you left. If you don’t believe me on that fight me now. I’ll guarantee that you’ll win, I was never able to beat you. You never went easy on me, telling me that if I was to really know how to fight I couldn’t have someone pull punches just to let me win. I’d have to win on my own.”

A smile came to her face as she remembered the lessons, taught to her at dusk down on the beach. Her father hadn’t known about them, which was probably best. He wanted her to learn to be a lady. She wanted to be a sailor. He wanted to pawn her off to some lower nobleman so that she would be someone else’s problem. She just wanted to be with Joseph. Even at a young age she was smitten with him. He was everything she had needed at the time, a friend, a protector, and was kinder to her than anyone else in her life.

She was just walking from the garage to the house and hurt it. She wasn’t doing anything strenuous.
In CassyK/Truepirate → 2 days ago Forum: Casual Roleplay
That’s fine. I’m trying to make my replies longer to give you more information on her.

Doctors aren’t sure what she did. They think it’s a torn or pulled hamstring.
In CassyK/Truepirate → 2 days ago Forum: Casual Roleplay
So he was looking for the dagger. “You took the dagger from me,” she stated calmly. Elissa was used to not giving away clues to her feelings during a negotiation. She’d made many a good deal in her ability to keep a straight face. “If I did have it, don’t you think your surgeon would have found it when he tended to my wound?” Her calm voice hid the pounding of her heart. She hadn’t planned on him realizing it was gone so soon. She wouldn’t give it up without a fight, especially when it was clear he didn’t remember her. It broke her heart to think that her best and only friend didn’t remember her, especially after all they had been through as kids. Elissa knew that she wouldn’t stand a chance in a fight against Joseph. He’d win. He had been the one to teach her how to fight. Growing up the local nobleman’s son had bullied her. Bullied her for her hair, her multitude of freckles, her father’s job and how she’d never be part of real high society since they were only rich from him working a commoner’s job. He teased her for her love of the ocean and how she always hung out with commoners and weirdos like Joseph. It would always make her cry, or at least it did until Joseph had taught her to fight.

She had been awkward looking as a kid, taller than other girls her age, thin and freckles. Elissa was still tall and not quite as thin as when she was younger. The freckles remained, dotting her face and arms like confetti, they became more prominent the more time she spent in the sun.

Elissa gave a shrug of her shoulders. “If you believe I have it, search me.” She leaned forward, resting her arms on her knees, a mischievous smirk on her face. It was almost a dare, as if she believed he wouldn’t search her. She’d find a way to make him remember her, he had to remember her, her life depended on it. He was the only one that could save her.
In CassyK/Truepirate → 2 days ago Forum: Casual Roleplay
I’m sorry, I’m trying to give more info on her. Right now I’m out running errands. Mom hurt her knee and can’t walk so I’m getting what she needs. Replies will be longer when I get home, I promise.
© 2007-2017
BBCode Cheatsheet