STATUS: I introduced someone to Harry Potter recently, too. They don't get the house part though 8 mos ago

8 mos ago
Current I introduced someone to Harry Potter recently, too. They don't get the house part though
8 mos ago
KissAnime died?!
1 like
8 mos ago
There's always worse - like the lights being a rave during a thunderstorm.
1 like

In Post a random fact about yourself. → 8 mos ago Forum: Spam Forum
I have 6 clocks in one room. It started at backup alarms and grew to the point that I'm basically just collecting them.
In Word association Game! → 8 mos ago Forum: Spam Forum
Storm
In Ennui for Yesteryear... Old Rp Partners that have Gone → 10 mos ago Forum: Roleplaying Discussion
When I was ~13-17, I did some pretty minor roleplaying with other people around my age on a forum for a show. It was pretty fun. Sometimes I feel nostalgic for it. I've lost contact with the people since long ago, but I'm sure they're all very different people by now. But the roleplay was very free and everyone was new to it, so we all made the same mistakes and adjustments, which made it fun.
In 7th Heaven - A Tavern Roleplay → 10 mos ago Forum: Free Roleplay
Made an edit to my post. Word didn't save the last paragraph. Sorry for any inconvenience, I should have paid more attention. 😅
In 7th Heaven - A Tavern Roleplay → 10 mos ago Forum: Free Roleplay
A man sat amongst a vast desert landscape, his hands running through the fine sand all around him. It was hot. Unbearably so – Alphere had been searching for days for a scroll. A new spell. An exciting adventure! At least, that’s how he thought it would go. But the desert was a vast, all-encompassing entity. The idea of finding a scroll on a very obscure spell, in a very specific portion of sand, among a very large desert landscape just didn’t seem as likely as when it first occurred. What Alphere needed was some water. Water from a spring sounded nice. “That’s a fantastic idea!” he exclaimed, bolting upright. Sand poured off his clothes and back into the desert.

Excitedly, Alphere lifted his hands in front of him, envisioning the lake. The beautiful trees. The quick rush of water out from the ground. The variety of exotic fish swirling in schools throughout the waters. "Tele-" He paused midsentence. No, no, a teleport wouldn’t do. He’d been out there for days, and he wasn’t about to lose his spot. A way to return, exactly to this very specific spot, was needed. Alphere reached to his side, pulling out a small, brown handbook and flipped through it. Squinting, he focused intently on a particular page. "-portal? To the spring of-"

A burst of light sprung in front of the man, swirling in on itself much like a whirlpool. It quickly grew, reaching his height and continuing beyond. A loose leaf of paper flew from the book into the portal. Then a second one. Soon, there was a small stream of papers being torn from the book and thrown into the portal. Wait... I can't lose those! Alphere rushed to grab the various pages, reaching for ones closest to disappearing into the portal. And with some assistance from the unstable sands, he plummeted straight in.

A blinding light, a feeling of weightlessness, and a significantly lighter feeling book of notes. Alphere stuffed the pages he managed to retrieve beneath the belts to his side. Soon, the light faded and the ground felt significantly more stable. Through the variety of black and gray spots filling his vision, Alphere glanced around. No portal in sight. Looks like that scroll is long gone. Outside of the lack of a return trip, there was a building. Not a lake. But it seemed warm and inviting. And not a desert, which was definitely a refreshing change. There's probably water… somewhere in there. And maybe a few pages from the book have fallen around here. Alphere dusted off some sand from his clothing, and made for the building.

Upon entering, he found it to be a tavern of sorts. Only a few patrons, but perhaps the night was young. Patrons that were... not all quite the same. Alphere noticed what appeared to be a small bar, and behind it was likely water. "Pardon my interruption. Do you happen to have-" Alphere coughed, some sand fluttering down from his shirt and sprinkling across the bar surface. "... water?"
In 7th Heaven - A Tavern Roleplay → 10 mos ago Forum: Free Roleplay 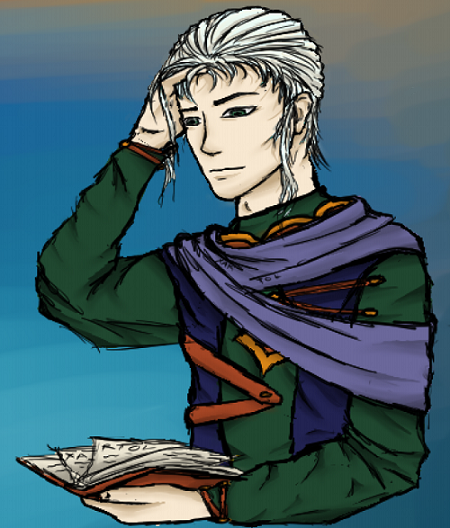 History: Alphere comes from a cushy home where cloth is long and flowing, politics are a daily discussion, and all meals are the exact same luxurious setup. But he hasn't been there in years. Instead, he's spent his time traveling in a lust for obscure and exotic findings - obscure spells, new and different people, and the occasional "exotic" meal. His upbringing has led him to some avant-garde ideas about what qualifies as obscure and exotic.

Skills and Weaknesses: Alphere specializes in magic, mostly arcane. He has obtained a small variety of spells from wandering. However, he may occasionally forget the correct words to a spell... or did he actually properly memorize them in the first place? Additionally, he is cursed with a cheese allergy.
In Video Games: The General Discussion & Community Thread → 11 mos ago Forum: Off-Topic Discussion

Xenoblade Chronicles is fun and it looks nice.

I'm looking forward to grabbing that. Been looking at the remastered switch version - originally my pokemon machine, but it's time to branch out. The trailers all look really nice.
In One good thing about today. → 11 mos ago Forum: Spam Forum
Had an omelette and some chili. Definitely a good day!
In Howdy → 11 mos ago Forum: Introduce Yourself

<Snipped quote by Xar>
Interest checks may be the place to start. I'm also in this Roleplay which is easy to join and a bit different than other ones. We're always looking for new people and we're all pretty close. We have a Discord OOC too. If you're interested in the concept, then I always welcome people to come join.

Otherwise, you can probably find some good games through any of the interest check sections.

I will definitely look into it! Currently catching up on the story so far.

Thanks to all the other welcomes!
In Howdy → 11 mos ago Forum: Introduce Yourself

<Snipped quote by Xar>
Roleplay is mostly done on the forums or through site PMs from my experience. There are some Discord Roleplays though it's mostly used for OOC ("out of character") discussions and interactions. Discord does seem to be rising in popularity, however, and I'm personally more a fan of it than forum-based plots. Most of the Roleplays you will find on here will likely be on the forums though.

Also order some groceries if you're worried about going out, that's what I've been doing.

Gotcha. I'll surf through the forums and find some interesting plots. I'll join the discord for more casual discussion. Thanks!

Welcome! I studied CS myself; you picked a great field.