All Beak and no Bite

STATUS: When Donald Duck traded his wings for arms, was he trading up or trading down? 20 days ago 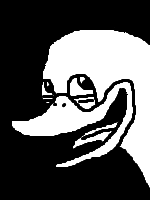 20 days ago
Current When Donald Duck traded his wings for arms, was he trading up or trading down?
1 like
27 days ago
Be like a duck; calm on the surface, but always paddling like the dickens underneath.
3 likes
28 days ago
If it looks like a duck and sounds like a duck, it could be a really ugly swan
2 likes
29 days ago
Quack!
3 likes
1 mo ago
Today is my birthday! For present, I wish for each and every one of you to have a great day!
18 likes

I'm a goddamn quacker, I am. Quack!

"Well, friend" she said, "Seems your luck is about to change! I don't know if I believe in fate or stuff like that, but chance is smiling on us both this day. You see, me and my friend over there" she continued, indicating Cillian, "Are well-versed travellers and outdoorsmen, and it just so happens we've frequented the Blackwood on more than one occation."

Sylvaine lied, of course, but the dwarf had no way of knowing. Besides, like all good lies it had a grain of truth in it; Cillian and her had spent a lot of time in the wilderness, albeit never far from the roads. Having let the information sink in for a moment, she continued. "As it happens, we are both also for hire. I have no doubt in my mind that we could find your friend for you and have him back within a week or so, depending on how far he's wandered. Meanwhile, you can remain in town and rest up, knowing he's on his way home." She lingered a moment, taking a sip from her glass, before going for the kill. "For a reasonable price, of course."

She put the glass down and gave the dwarf her most serious, businesslike look. "My proposal is this: My associate and I venture into the woods in pursuit of your friend. You supply some money up front, a couple of silvers, so we can aquire supplies for the expedition. If we return within a week, you pay us the rest of the money, three gold each. If we're late, you pay us only one gold each. Either way, you get your friend back and can remain here where it's safe. How does that sound?"

Diplomacy roll: 4 + 1 = 5
In The Blackwood → 20 days ago Forum: Advanced Roleplay
Sylvaine took a deep breath and held it. The smells of drink and drunkenness, of joy and despair, and of hopes; both building and dashed, filled her lungs and made her nostrils tingle. Made her think of her father in his closing days. How he had lost command first of his company, then of his senses, and lastly of his body itself. Still, they'd had their share of love and laughs over the years. Until he started stealing from her to buy spirits, and tell her she was a cold cunt when she caught her, then finally forget about her altogether and mistook her for a prostitute. Happy days.

Selling this poison to the populace in the guise of providing social arenas and means of liquid courage, and probably at a massive profit as well, was nothing short of genious. "Ah!" she exclaimed, flashing her companion with her friendliest smile and sweeping the room with an outstretched arm, "Civilization!".

She surveyed the room and its inhabitants. The robed men looked boring to her, not worthy of her attention. The rich man could have been a target, but he was already being worked on and Sylvaine didn't feel like competition at the moment. The trio of happy adventurers were of course intriguing, but happy often meant content, and content was hard to work with. The loner at the bar, on the other hand, seemed more her mark. Despairing, perhaps desperate, and probably drunk in the bargain. Despair meant want, desperation meant carelessness and drunk could mean all matter of things, but Sylvaine had a knack for turning it into conformity. She would start there.

Cillian looked right at home, foreign features or no. Sylvaine imagined he'd probably seen at least as many taverns as her in his day, and had likely been booted out of less than half that she'd been. She could almost picture him, striding into the center of attention, striking up a tune or a song to enthrall the audience. Maybe if she got some drink in him he'd do it. That would certainly be worth a little silver. It was settled then. She turned once more to her companion. "You go ahead and find us a seat, darling, and I'll see about some food and ale" she said, and added, with a wink, "My treat, of course.". She then went for the bar and made her order, turning towards the dwarf and looking her best to look friendly and sympathetic.

"Well met, friend" she said, giving the dwarf a searching but warm look, a sad smile on her face, "One of those days, is it?"
In The Blackwood → 23 days ago Forum: Advanced Roleplay
Although a discount wasn't what Sylvaine'd had in mind, Cillian had paid the notary before she could argue further. Annoying though it was, she supposed it couldn't be helped what with the rabble behind them becoming more frustrated by the minute. Besides, she hadn't yet spent a copper, even though she suspected that the bard would want to be compensated later. That, at least, she could work with. She flashed her friendliest smile at the soldiers as she passed, gracing them with a nod and a "Much obliged, gentlemen!"

Greybridge was bustling with activity, the throng of people giving rise to a wave of scents, sounds and impressions. Sylvaine was in no way a stranger to big cities or heaving mobs, having travelled far and wide with her fathers company, but the loneliness of the wilderness had rendered her slightly unprepared for the experience. She felt dizzy, but made sure not to show it, doing her best to proceed through the masses in her usual swagger. She heard Cillian speak to her, complimenting her on her feat at the gate. "Huh" she snorted, "The best lies have a grain of truth in them. While it is true that my father fought for the city, it was rather in the sense that he tried to capture it for his employer than defend it from an attack."

Cillian laughed at that. A charming sort he was, and agreeable. Gave her an idea. She leaned in close, a knowing smile on her face. "I don't know about you, but I could use a drink right about now" she said, raising her eyebrows, "See any taverns?" Cillian frowned and was about to argue, but she cut him off. "It's never too early to do the right thing, my friend" she said, "And I'm telling you; the right thing for us, right now, is a proper drink."
In Once Upon A Kingdom → 23 days ago Forum: Nation Roleplay
Retracted.
In Once Upon A Kingdom → 25 days ago Forum: Nation Roleplay
I'll hopefully get something up by sunday!
In The Blackwood → 25 days ago Forum: Advanced Roleplay
I will be away today and tomorrow, but I'll get a new post up by sunday. You can take the reins until then, @Romero
I'm a goddamn quacker, I am. Quack!
<div style="white-space:pre-wrap;">I'm a goddamn quacker, I am. Quack!</div>
© 2007-2017
BBCode Cheatsheet