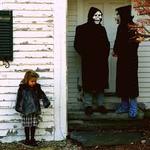 Marcus looked up from the ground as he heard a woman’s voice calling over to him from the yard next door, raising a brow in frustrated curiosity at her. He cursed under his breath as she told him that the family who had once lived in the house had been gone for months. “And they didn’t even bother to call? Fucking typical…” He cursed softly with a heavy sigh, before pushing himself to his feet. He kicked the air lightly, before standing there, facing out into the street, and taking a deep breath to calm himself. He shook his head a couple of times, before letting out a soft chuckle. “Well, can’t say I’m surprised.” He scoffed with a shrug, before turning back to the girl who had given him the news.

He hadn’t gotten a good look of the girl as she was walking over, but now that he had turned to face her, he was caught off guard a little. She was short, with black curly hair, and dark brown eyes. Marcus wasn’t sure if he recognised her not, he hadn’t lived in that neighbourhood for a few years, and never really paid much attention to the people back then anyway. But he did know one thing for sure. She was gorgeous.

“Heh, sorry… I must seem like some sorta crazy person…” Marcus spoke softly, with a nervous chuckle, giving the girl an uneasy smile. He looked like he hadn’t slept properly in god knows how long, and probably hadn’t had a good meal in about as long. “I, um… My family lived here… Guess they moved and forgot to let me know.” Another uneasy chuckle left the young man’s lips as he lifted his shoulders in a shrug, trying to play it off as no big deal, but not doing so well at it. The presence of pretty girl added to the unease of the situation for Marcus, who had never been great with people in general, let alone those he found attractive. “I… Uh, I guess… Umm…” He stumbled over his words, his face growing redder by the second, as his words were refusing to come out of his mouth in a proper sentence. He cursed at himself in his mind for being such an awkward loser, but sleep deprivation, hunger, and everything else going on was just getting a little too much for him. “Umm… You said you could help me, umm… Get into the house?”
In Devils and Dust → 11 mos ago Forum: Casual Roleplay
Marcus Ainsworth
A heavy sigh left the lips of the disheveled looking young man as he stepped off the train, onto the all too familiar train platform of his home neighbourhood. It had been a couple of years since Marcus had stepped foot on home turf, and honestly he would have been happy if it had been even longer. He wasn’t exactly eager to get home, and he was sure that “home” wasn’t too eager to have him back either. He started walking away from the train platform, down a set of stairs, in the direction of his family home, casually glancing around the familiar surroundings. The place hadn’t changed a bit since he left.

Once he had left the train station, he took a second to stop and think. Setting his duffel bag full of clothes, laptop bag and guitar case down beside him, he retrieved his phone from his pocket. It was old, with several cracks in the screen, but it still worked. Brushing his long, messy, dark brown hair from his face with his other hand, he called the contact in his phone that was listed “Dad”, for the 10th time in the last 2 days. The call went straight to voicemail this time. Marcus gritted his teeth, grumbling to himself softly. “Why the fuck won’t anyone answer..?” He mumbled under his breath, sighing heavily again. He had been trying for days to get in contact with anyone in his family, with no luck. Well, looks like they were gonna get a surprise.

Marcus wasn’t looking forward to returning home. He didn’t exactly have the greatest relationship with his family, and did a good job of burning that bridge when he left for college, so it was no surprise that no one in his family was returning his calls. If he could avoid it, he wouldn’t go back, but after being expelled from school, he didn’t really have any other options. Hesitantly, he picked up his things again, slinging his bags over his shoulder and holding his guitar case in his other hand, before starting down Reservoir Lane.

It was quite a nostalgia trip for the young man, walking down the street where he grew up, albeit one he would rather not have. He had very few fond memories of his time growing up in this neighbourhood. It was never the nicest of places, and it seemed like it had only gotten worse. Rumours of increasing amount of people going missing from the area had been circulating recently, and the crime rate had definitely gone up. It wasn’t exactly the most pleasant time to be returning home.

Marcus stopped as he reached his family home. If anything, it looked more rundown than ever, and it never was in good shape to begin with. It almost looked abandoned, with boarded up windows, and not a single sign of inhabitation. Marcus raised a brow as he noticed a “For Sale” sign in the front yard. “...The fuck…?” He mumbled to himself, before approaching the front door, tentatively knocking a few times. “Hello? Anyone home?” He called out, with a tinge of worry colouring his voice. No response. If there was anyone home, they were doing a damn good job of hiding.

“Fuck!” Marcus exclaimed at no one in particular, kicking the door in frustration. It definitely seemed like his family had up and left, without so much as a text message to let him know. He didn’t exactly blame them, especially after he had left things, but still. A little heads up would have been nice. Another heavy, frustrated sigh escaped him as he set his things down and sat on the front step of his abandoned family home. “What the fuck am I supposed to do now…?” He pondered to himself, staring blankly out into the street.
In Devils and Dust → 11 mos ago Forum: Casual Interest Checks
This looks like it could be fun, consider me interested!
In Slice Of Life - SOL City - New Chapter → 12 mos ago Forum: Casual Interest Checks
Marcus and I are primed and ready for whatever drama comes our way!! :D
In Our Last Summer Together → 1 yr ago Forum: 1x1 Roleplay
Same!! I adore them. That's why even if it takes me a while to post sometimes, I'm always gonna do my best to keep this going! :)
Also, I'm wondering if we should maybe take this scene to PMs, in case things get a little steamy? (Pun intended

)
In Our Last Summer Together → 1 yr ago Forum: 1x1 Roleplay
Raven Carter

Raven smirked sleepily as Molly started to wake, tilting her head up a little to affectionately nuzzle the other girl’s cheek softly. “Morning. How’d ya sleep?” She asked in a waking whisper, one hand shifting to tangle itself into Molly’s messy hair, gently running her fingers through it. It definitely wasn’t the first time that Raven had woken up with someone in her bed, but this was different. She didn’t care how long they spent there, just lying in each other’s arms.

“You’re gorgeous, you know that right?” She complimented, smiling at Molly while playing with her hair. She really was. Even after just waking up, Raven found the girl beside her beautiful, in so many ways. Never did she think that she would be in the position to wake up next to the most popular girl in school, and there she was. And said girl, was more than she ever thought she would be.

Leaning to the side a little, Raven reached over to her bedside table and picked up her phone, unlocking it with the fingerprint scanner to check the time. “It’s nearly 11. I’m gonna go have a shower, and you’re more than welcome to join me if you want.” She said with a sly wink, kissing Molly on the forehead before she pulled away and sat up, lifting herself out of bed and pulling off the shorts that she slept in in one motion. She slowly started to walk to the door, wiggling her butt teasingly a little as she did.
In Our Last Summer Together → 1 yr ago Forum: 1x1 Roleplay
@CioOkay so I've been super busy and haven't been able to post but I'll do my best to get one out tonight!!!
In Our Last Summer Together → 1 yr ago Forum: 1x1 Roleplay
Raven Carter

Raven let out a soft, sleepy giggle as Molly wrapped her arms around her. She rolled onto her side, shifting a little to get comfortable, snuggling back against Molly happily. Raven loved being the little spoon, wrapped in someone's arms all safe and protected. She loved cuddles in general, no matter the position, she truly was flexible, but little spoon had always been her favoruite. It didn’t take long her eyes to close, as she slowly started drifting off to sleep, a soft smile lingering on her lips.

It wasn't until the late morning, when the sun was high in the sky, peeking through the drawn curtains of the bedroom window, that Raven started to stir. Most of the house were awake, or at least waking up by now, and the house was definitely alive with sounds of movement and light activity. As Raven started to wake, groaning softly as she shifted her bodyweight a bit and opened her eyes, she noticed the arms wrapped around her, and smiled sleepily, rolling over to face Molly and cuddling up to her closely. She didn't necessarily want to wake her, and was happy to lie there longer, nestled against her, enjoying the closeness. She did however have to kick most of the covers off of them, as the summer heat had definitely started to build, and it was too hot for a blanket.
In Our Last Summer Together → 1 yr ago Forum: 1x1 Roleplay
@Cio Is Molly an early riser? Would she wake up first and get up, or lay there until Raven did? Because Raven is a heavy sleeper and won't wake until late in the morning
In Our Last Summer Together → 1 yr ago Forum: 1x1 Roleplay
So cuuuute aaaahhhhhh!
But yeah, now I'll have Raven fall asleep with her and we can start the next morning!!
© 2007-2017
BBCode Cheatsheet