[IC] To Face Tomorrow - A Fantasy RP where you don't know the other characters!

The Father of the Pentium Revolution has helped energize a decades-old relationship with the Kingdom of Soland by instating a new exchange program for the two countries’ best and brightest. Announced last week, the program details an extensive curriculum designed around exchanging information and collaborating to push pentium research even further forward.

“It’s truly a great honor to be able to work with the man himself, even if he is getting on in years,” M. Tare, the Kingdom’s Chair of Pentium Research, stated. “I’ve long felt a sort of kinship with Mercer, and I’m truly glad we’ll be able to ditch this nonsense about arms races and move forward together.”
Hidden 4 mos ago Post by stone
Raw —
GM

Redeus Alston, Prina Elford, Jonathan Holst, Eric Cages, and Fran Branton have been chosen as the next five Cilezan Senators after a competitive election season.

“Six years ago, democracy was hardly even a thought in our citizens’ minds. We barely held on, spurred onward by the prospect of a uniform, transparent government under which every citizen could live their lives to their fullest extent. Let us not erase the atrocities inflicted upon our people by the Earthquake Tiger, but rather use them as a warning light to guide us away…”

After a rousing speech delivered by Senator Alston, the five senators then retired to the discussion chambers to refine and choose members of the advising cabinet... MORE ON A2
Hidden 4 mos ago Post by stone
Raw —
GM

A great tragedy has befallen the world of science. Last night, the Father of the Pentium Revolution was found dead in his workshop, murdered in cold blood by one of his students. The cause of death is currently unknown. His murderer has fled the scene and is still on the run, sources say.

Mercer’s wife reportedly waited for her husband to come to bed, but didn’t think much of it when he didn’t. “Sometimes he would just stay up overnight, so I wasn’t worried,” she told officers in an interview this morning. “But when I checked in on him in the morning…”

Officers at the scene suspected one of the Solandian students studying at Gladwood Labs to be the culprit. This suspicion was confirmed when the suspect fled the research complex, injuring two officers along the way. The entire Solandian study group has been arrested as accomplices.

The murderer has been identified as Altea Kaine, a young woman of short stature, long dark hair, and blue eyes. She is extremely dangerous and not to be confronted directly. During her escape, the murderer made off with a prototype casting glove, which she used to fight law enforcement at the scene. Another student, yet unidentified, has also escaped from the police. The two appear to be working together.

If any of our readers have any information on Ms. Kaine or her accomplice’s whereabouts, please contact your local police station immediately. Asonor Tal will set this great injustice right.
Hidden 4 mos ago → 4 mos ago Post by stone
Raw —
GM

Half a year after G. Mercer’s death at the hands of a Soland-sponsored exchange student, the Vermillion Lions have called for the annexation of the Kingdom as recompense.

“We’ve done a thorough investigation into the whereabouts of the murderer, and have concluded that she returned to her home country,” Inquisitor Enrona says, “However, the Kingdom still refuses to give her over.”

As such, the Vermillions Lions announced the annexation this morning. Members of the Asonoran Representation Foundation broke out into protest over the statement and adjourned the High Chamber Meeting immediately after.

DUCHESS ALEXANDRA INIA CONTRIBUTES 500,000¢ TO SUMMER FESTIVITY FUND, TWICE THE AMOUNT GIVEN BY HER FATHER
05-31-926
Hidden 4 mos ago Post by stone
Raw —
GM

“We have not forgotten the atrocity committed against the late professor, and will make all efforts to avenge his death,” a Vermillion Lions representative stated. “The Kingdom could have prevented this if they gave up the criminal. Instead, they have chosen to remain obstinate in their efforts to hide an international criminal.”
Hidden 4 mos ago → 3 mos ago Post by stone
Raw —
GM

After a years-long legal battle, Sylphid v. Sutherland Province has finally concluded, ruling in the plaintiff’s favor. As a result, the oft-disputed legality of jaeger corps and their pentium-hybrid weapons usage has been resolved.

New guidelines will permit solo jaegers to carry pentium-hybrid weapons, no longer beholding them to a government-approved corps or similar organization.

“I’ve spent more time in the courtroom than out in the field at this point,” Sylphid told us after the ruling was declared. “But this is a good victory for us lone wolves out there.”
Hidden 4 mos ago Post by stone
Raw —
GM 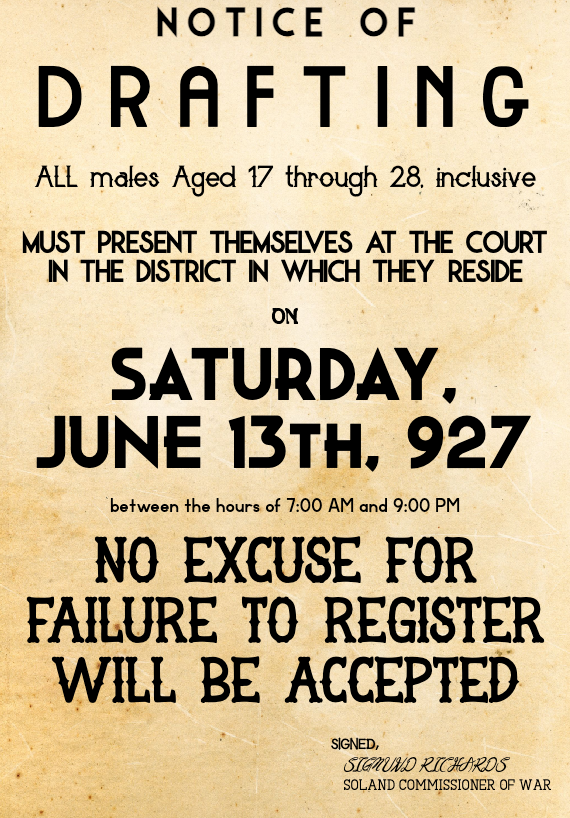 Two years after the death of G. Mercer, tragedy once again strikes Gladwood Laboratories–this time in the form of an accidental explosion.

Shortly after 20:00 PM on 06-21, the floor of a research laboratory caught fire due to a spilled chemical. Evacuation and containment procedures proceeded as normal, with the local firefighting scene on the way.

Unfortunately, the chemical fire made its way to a storeroom of unrefined pentium crystals, causing a large explosion that destroyed most of the lab’s basement, as well as the left wing.

Three people have been named as casualties.
Hidden 4 mos ago Post by stone
Raw —
GM

"[...occupying the city] has proven no small task, but at least most of the townspeople are cooperative."

"So there are those who aren’t? Cooperative, I mean."

"Oh, absolutely. But it’s a small number. My advisors say it’s no more than ten, maybe fifteen people. And in a population of thousands, that’s no big deal. Most of the city has welcomed us with open arms."

"Open arms. Guess they recognize Asonor Tal’s got something their crown doesn’t, haha!"

"So, what’s the next course of action, Commander?"

"We’ll stay in town a bit, restock, and move onward in the campaign. Of course, I can’t say much more than that. Can’t give away too many details, after all."

The full interview will be contained within our Sunday Issue, which can be purchased for 40 cinques at your nearest general goods shop.
↑ Top
© 2007-2017
BBCode Cheatsheet