617 posts
in 3234 days
Seen 26 days ago
So I asked the old GM of this RP and he agreed that I could reboot it, with some of my own changes. So, I bring you Solar winds 2, new and improved.

Intro:
Solar Winds is a sci-fi nation roleplay set in Andaluzia, an old double ring galaxy. This roleplay will attempt to adhere to science and realism whenever possible while remaining “playable” to the nations and characters. I have devised a number of interesting mechanics that should aid in protecting the realism while not taking away from the enjoyment of the RP experience. As a GM I will not be playing a nation, instead I will be shaping the background atmosphere, controlling NPC’s and other matters outside of players control. Space is volatile, confusing, and unforgiving so expect the conditions you meet in Andaluzia to be the same.
Rules:
- Be courteous, no insults, slurs, assholdry or over-edginess. I will ban you
- Communicate in the discord, I would implore you to discuss plot lines and other story devices amongst yourselves
- No god-modding, be balanced, be fun to fight, be fun to interact with. I will balance you and your nation if I feel like it is too much
- No magic, Psyonics, tech-psyonics or other fantasy. Nothing against it, I love the fantasy, just not what I was thinking about with this RP.
- Keep up with your posts
o 1.5 weeks without a post, I will give you a slight reminder
o 3.0 weeks without a post , I will move the plot/battle along
o 1.0 month without a post, your nation will be liquidated and under NPC control
- Stay based in science and realism. Im no astrophysicist and I am no expert on the science, but I would expect nation tech, weapons, travel, etc… to be somewhat plausible. I will accept scientific handwavium if it could be possible.

The Plot
The year is 239 of the 63rd millennium, space is no longer the final frontier and life flourishes amongst the stars. Thousands of Civilizations have come and gone through the galaxy of Andaluzia. Some civilizations naturally died out, failing the test of survival for their species. Others destroyed themselves, burning hot as stars for a moment before wiping themselves out.
Andaluzia has seen few exceptions to this rule, some civilizations have endured throughout the ages to permanently change Andaluzia for the better. The current inhabitants of Andaluzia have many legends for those who came before them, but one name is common amongst them all, The Kargath Republic.
The Kargath Republic started humbly, like most of the civilizations of Andaluzia. Growth was rapid and the civilization soon met other civilizations with similar goals. Some cooperated, some fought, others conspired against one another in the great game of survival. In the end however, one nation remained, the Kargath Republic. Having dominated the galaxy and not destroyed themselves in the process, the people of the Kargath Republic could grow without resistance. All manner of beings lived in harmony under the banner of the Republic. Science flourished and it seemed that utopia could be reached as the power of galaxies could finally be harnessed.
The wild tides of the universe cannot be tamed however, and doom soon came to Andaluzia. Its sister galaxy Fomonka, on a collision course for millennia, finally collided with Andaluzia. Once prosperous worlds collided with stars and other worlds. Some unfortunate worlds were flung far from the warmth of their parent stars and died out, becoming cold rogue planets. Others had their surfaces ravaged by debris as chaos gripped the galaxy. This would be the death of the Kargath Republic, their people scattered and isolated, cut off from the power and stability that they once enjoyed. Time continued however and as Andaluzia healed, so did those who inhabit it.
In the current age, Andaluzia has formed itself into a double ring galaxy. The Inner ring, is made up of old ancient stars that are the orginal inhabitants of Andaluzia. Old and powerful civilizations make up this inner core. This inner core is isolated themselves however, as a great void exists between them and the civilizations of the outer ring. The outer rings is made up of newer stars and systems, thousands of younger civilizations call this great ring home.

This is where our story begins, a tale as old as the galaxy itself. Will these civilizations fizzle out slowly, burn away in a quick blaze or fury or stand the test of time to brave the dangers of an endless universe. The choice is up to them……or is it.

I want to try something different with this RP and incorporate a number a “gameplay” mechanics that ( in my opinion) will make player interaction a little smoother.

- Maps
o I want to incorporate the use of maps for things like battles, travel, etc….
o I have found that this helps balance FTL travel and battles while providing a physical representation for progress and distance.
o This will also help keep track of campaign/exploration progress

FTL Travel limits
o FTL travel will be timed
- Short jumps between. Solar systems and within your local area do not require a cool down post. Jumps under within system are considered short
- Players can make two back-to-back FTL travel posts, but must make a short FTL drive cooldown post after two jumps.
- Character death and Nation losses
o This is a RP of nations, not necessarily characters. If you continuously put your characters in harms way, expect them to be harmed.
o Characters will die as a result of battles, assassinations, accidents, etc.
o I will be keeping track of nation losses in battles, societal attrition, etc. This is to keep army and population sizes in check as well as the progress of military campaigns.
- Nation Size
o Nations will be classified into three sizes at the start of the RP
- Large nations, most likely civilizations that barely survived the merging of galaxies or were established shortly thereafter. Large nations control between 10 and 20 systems and can field moderately sized expeditionary forces without huge societal change. Energy and food production match population growth
- Medium Nations, established sometime after the merging of galaxies. Control between 5-9 systems with the energy and food production to maintain population growth over time. Can field small expeditionary armies without huge societal change.
- Small Nations, young nations recently established. Small nations control between 1-4 systems. Can field small expeditionary raiding groups over relatively short distances.
o Nations can be split into a few different specialties:
• Balanced: Balanced energy and food production
o Pros: Unspecialized, energy and food production sustain normal population growth
• Agri-nation: More energy and food production
o Pros: Rapid population growth
o Cons: Overpopulation, pollution, low tech growth
• City State: High tech, slow populations growth
o Pros: High tech growth, high base tech, high energy
o Cons: Slow population growth, low food production
• Pirate haven: Lawless regions of space with a random assortment of tech, martial strength and societal growth
o Pros: Can have degraded high tech ships and weapons and societies
o Cons: Little to no population growth, food or energy production.
- Military Size, Strength and Composition
o Nations have the choice of being militaristic
- Militaristic nations can have up to 40% of their total population in the military
- This would be the equivalent of having every able man, woman and child over the age of 16 in the military
- Militaristic nations slowly lose any culture they had, turning more towards a martial culture ( Think: The Imperium of Man)
- Militaristic nations suffer stagnation in tech growth, food and energy production.
- Population, Tech and production growth can only occur by conquest
- Creating your nation
o Players can make three choices in Andaluiza:
- There are slots for 5 large nations
• Large Nations must reside in the inner ring
- There are unlimited slots for small and medium nations
• Small and medium nations start within the outer ring
- Small and medium nations start with no knowledge of other nations, unless planned beforehand by those players
- Large nations have established diplomatic ties with one another, but no knowledge of smaller civilizations
- Nation Sheet

Yam I Am Gorgenmast Did Nothing Wrong

Member Online
Yam I Am
Gorgenmast Did Nothing Wrong 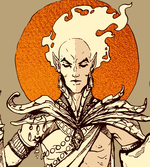 Yam I Am Gorgenmast Did Nothing Wrong

Member Online
Yam I Am
Gorgenmast Did Nothing Wrong

617 posts
in 3234 days
Seen 26 days ago
Well, I have returned and will take your suggestions into practice. Stats have been removed, HOWEVER....I still remain the final say on anything I see as OP.

The RP continues, at your earliest convenience