Thinking of a Story To Tell 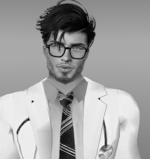 In A Story Teller → 1 yr ago Forum: Introduce Yourself
@amorphical Good morning!

I think it's important in a Sci-Fi setting to discuss a technology level before the story begins, or anything futuristic for that matter. If there's space exploration, what method is used? If there is combat, do people use laser weapons, or are you still conventional? How advanced is the AI, or things like implants and cybernetics?

An inherent issue with Sci-Fi can often be someone overestimating the advances of the world. That being said, if it was one little toss-up like that, there are really two easy options right away.

1. The person can just accept your idea, why not? The story works both ways, unless it ruins the whole plot or world.

2. Just rewrite the post, that lovely little edit button can work wonders! I had to rewrite a post yesterday from an Rp because a typo of "Trail" instead of "Train" made me think we were in a wagon. It happens, laugh it off, fix it.

Most importantly though, discuss that technology line with them, and interact with your partner when you want to introduce a new and more questionable one that wasn't discussed. If you think a tech might be too much, ask first.

-I don't do fandom highschool plots. I really, truly hate them.

-Many of you are thirsty from what I seen scrolling through, and that's okay. I prefer mature stories with dark elements, BUT, I will not do a story that doesn't have enough plot. One heated scene every arc or so would be fine if you really need it.

- If you're about to message me about your Teacher/Student desires, please don't. As a teacher, it's pretty uncomfortable.

-Romance is a side, not a main plot point

-I can play both genders, and as many side characters as you need. Hell, if you want to be the only character in your own story while I do the rest, that's fine, but be interesting.

-I work Monday-Friday and generally write after work. Saturday's I'm very busy and may not post.

That's the basics of it, I'll revamp this whole thing later. Whatever plots you're looking for, feel free to message me.

I don't believe so, I have never seen the abbreviation, and Google isn't helping. If it's some fandom, I can learn it within a day or so.
In A Story Teller → 1 yr ago Forum: Introduce Yourself
@Tim the Yeti@Hellion@Naw

Thank You:)
In Let's Make Something Interesting → 1 yr ago Forum: Casual Interest Checks
Yes, you're interested, you clicked after all. What are you interested in though?

I, my fickle friends, am A Story Teller. The problem is, when you have so many stories to tell, hundreds of thousands of words written and told over my years, so much lore, where do you start? It's a genuine struggle, really. Now, while I do like to go overboard in my writing sometimes, I'm a very blunt person in reality, so lets get some things out of the way. I'll create a story for anyone, or any group of people, but I have some standards.

-School is a big no-go. I hate the stigma of them. If you want to be a 16 Year old anime main character, go away, please<3

-The story keeps moving forward, if you can't keep up and don't warn me, I'll flat out kill you('re character) without warning. My stories are a long term commitment, because they have to have an ending.

-If it's a fandom style of world, there probably won't be any characters you know in it. I've gotten pretty sick of people whining that it isn't their interpretation of a character so it isn't right.

-Be ready to for pain! If your character messes up, it'll be unpleasant for them. You're part of the story, you revolve around it, and it around you. I think roleplays die because you know whats boring... Always winning, always being this unstoppable main character group, everyone can dodge, block, counter everything! I will never run a story with super powerful main characters at the start. They will struggle, survive conflict, and develop relationships naturally.

That's the short version, I'll toss some things here once I know what people want. There are threads of peoples ideas, but this is where we can see what we'd like together, and tell some stories when we know maybe :)