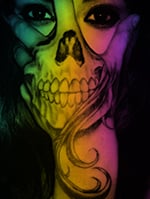 3 yrs ago
You don't realize how isolated you are until a pandemic hits and you legit make zero changes to your life.
12 likes
3 yrs ago
I've never once faked a sarcasm.
4 likes
3 yrs ago
So, I thought the dryer made my clothes shrink. Turns out it was the refrigerator :/
4 likes
3 yrs ago
Them: "What pronoun do you use for you?" Me: "Your Grace."
9 likes
3 yrs ago
At my funeral, take the bouquet off my casket and throw it into the crowd to see who's next.
19 likes

In The Sunday Group → 4 mos ago Forum: Advanced Roleplay

Do any of you need any direction or info? Feel free to ask if so!

Unfortunately I need to bow out of the RP.
In The Sunday Group → 5 mos ago Forum: Advanced Roleplay
I'll also have a post up by tomorrow as I will be leaving out of town Friday and won't be back until next Wednesday. Perhaps there is a place Alyx can chill so it doesn't cause any posting issues for others.
In Marvel: Dawn of X → 5 mos ago Forum: Casual Interest Checks

Me too. I'm playing around with ideas. Trying to catch up on years and years of not paying attention to the Marvel Universe.

“Four hours of sleep if I was lucky.” The girl yawned, reaching for her favorite ceramic mug that hung just above the coffee maker, and poured a bit of coconut milk in before slowly stirring in the freshly brewed essence of life.

“Really? What the hell were you up to last night?” A concerned female voice on the other end of the phone asked. “This side hustle you have is really messing up your sleep pattern, hun. Is it even- ”

“Yes.” Alyx interrupted. “It’s worth it, and it’s an outlet I need, okay?” She said matter-of-factly, anxiously curling a lock of her short dark hair around an ear, before taking a long sip of the coffee, which kept an awkward silence going for at least five seconds.

“Okay.” The woman in the ear piece cleared her throat. “Your dad and I are just worried about you, Ally. But…we also trust you to do the right thing. So, that’s that.”

Whenever her mother ended a conversation in that manner, it was never really over, but moreso, put on hold for another opportune time. Probably the next time she visited them. I guess like many parents, they assumed to know what was best for their kid, but why aren’t we ever allowed to just learn on our own and at a pace we deemed appropriate?

“Look mom, I gotta run, but I’ll call you later in the week.”

“Always. Love you. Give daddy a big hug from me.”

Alyx ended the call and tossed her phone on the counter, trying to enjoy the rest of the coffee, only to hear the low notification of an email coming in. There were times where a moment's peace from all electronics would be awesome, but duty seemed to call at the most inopportune times…

Really? We’re being summoned for traffic infractions? The girl smirked, knowing there was more to it than that, especially when it concerned such an off-the-books division as the Sunday Group. And besides, Eleanor didn’t mess around, which was one of the greatest traits a leader could have. Who wants to waste their time running around in circles? Alyx had mad respect for the woman, and is also one of the reasons she’s decided to stay on with the Group.

Not long after the email, she received a few images from her boss of what appeared to be very poorly rendered symbols, and yet -right off the bat- the crude cross hatches and formations looked quite familiar to that of ancient Vodou culture, something of which was fairly common in that part of Louisiana. However, the images revealing the auras of magical energy, did not seem as common to traditional Vodou practices. In fact, Alyx really had no idea, per the unusual colorations.

But, she would need to get a better look once she had arrived at the GPS coordinates, as only being up close and personal with the naked eye would allow more information to be collected.


At least the drive wasn’t too bad, and rather adventurous admittedly, being sent through backroads that probably hadn’t been used all too often by the general populace. There were a few moments she thought her Honda Civic would get stuck in softer and muddier areas, but thankfully today was not the day. She rolled up to the scene and gave Eleanor a bit of a half-hearted wave as she parked next to her vehicle, and stepped out, taking a deep breath as though to prepare for the worst case scenario.

“Mornin’ boss” Alyx smiled, adjusting the collar on her favorite gray button down blouse she’d decided to wear with a dark pair of slacks and matching low-cut boots. The girl didn’t wear a lot of makeup to begin with, save for a bit of eyeliner and a layer of “brick red” lipstick, which looked great against her dark skin, also doubled as a great moisturizer. Overkill for field work? Possibly. You never know when you have to dress to impress.

“So, that’s a hell of an ornament wrapped around the tree.” She motioned toward the crash site several feet away. “Great pics, by the way, but it was tough to discern anything more than surface information. Looks like a mixture of magical properties. I’m thinking Vodou in origin based on the technique, but that’s easy enough to assume considering where we are.”

She shrugged, and adjusted the strap of the small leather satchel slung on her shoulder. “Anyway, let me take a closer look.” The girl started toward the twisted steel mess, sliding an N95 mask over her face, and pulling on latex gloves that she retrieved from her bag. The closer she got to the driver’s side, the more she regretted it, as the stench of petroleum and death penetrated her mask and senses.

“Why is it always a dead body?” She mumbled under her breath as she stopped inches from the opening and peeked in, pulling out a small metal flashlight to illuminate the area a bit better, and making a guttural sound in the back of her throat as she saw first hand the thick, dark inky substance emanating from around the glyphs. As if the smell of the corpse wasn’t bad enough, whatever this mess was had a very unique & pungent scent that almost brought Alyx to the brink of vomiting in her mouth.

“Good thing I didn’t eat much this morning.” She exhaled heavily, trying to refocus her attention on the glyphs as she shined the light against the yellow pigment used on the man’s skin. With a twist of the cylinder on the front of the flashlight, the lens changed to a warmer color, which then revealed details within the paint itself. Flecks of green were detected, which most likely made up the properties of the yellow paint, along with base red pigment.

Alyx pulled a small stainless steel dental “scraper” from her bag, along with a small vial that had already been prefilled with solution. She carefully peeled away a small piece of paint from the skin, and dropped it into the vial, shaking the small tube, sealing it, and replacing it in her bag for later inspection.

She stood up and stepped a few feet away from the car and slid the mask down a bit trying to catch her breath once again, and perhaps a bit of fresh air not being nose-deep in a corpse. After a few moments, her eyes caught something that she hadn’t seen before. Perhaps taking a step back did her more good than she first thought.

“Uhhh, Eleanor.” She raised her voice based on the distance they were apart. “I think we have a scrambled message on this guy.”

Alyx was pretty sure the glyphs were not random wards, but perhaps some kind of message jumbled up via magical symbols. All that needed to be done now was to put the puzzle pieces together.

Eleanor Tregellen: One of the few people that is more like me than I would ever admit. Elle is approachable and definitely someone I trust and have no issues confiding in if needed, although sometimes I wonder just how much is too much with her. She has a habit of not complaining, and that air of professionalism and uncompromised confidence seems to really shine with the head of our group.

Primrose Chastain: Vanity of vanities. All is vanity! Yep, that pretty much sums her up, at least on the outside. Like a Hollywood starlet from the Golden Age. Rich, and she knows it. I always felt like Prim put up a front just to push people away, but there are so many more interesting layers to her once you’ve known the woman long enough. Still, she’s smart, witty, knows what she wants and isn’t afraid to seize opportunities. All in all, she’s bearable company.

Malcador Ravenwood: Okay, yes, I can’t help but crack a smile and feel just a bit better about myself when he’s chatting it up with me about some random piece of artwork I’ve had my nose stuck in for hours on end. However, I also know most of what he says is bullshit, and those good looks, fancy threads, and cavalier attitude can only get him so far. Also, his whole “old world mysticism” vibe feels played out. Robes? Who does that?

Jaelle Codona: Hauntingly beautiful, quite the silvertongue, fun personality, great dancer, and…totally can’t be trusted. However, I try to give the girl the benefit of the doubt as often as I can spare. I mean, being dead can’t be easy for anyone. Jaelle, for the most part, has been quite the boon to the group, although I still get a little weirded-out by her friend Mal.

Fynn Laplace: The dude is, hands down, one of the best people I know around computers and pretty much any tech that is out there. Good thing too, because I know I’ve had to utilize his skills a few times just to break into my own laptop. Still, the unsettling presence of whatever lives inside him can’t be overlooked. I try not to stand too close if I don’t have to.
In The Sunday Group → 5 mos ago Forum: Advanced Roleplay

Ok we are off and running! If you haven't completed your feelings about your coworkers list please do so before you post.

Without further ado @Hellion will be our first clue giver!

Great opening post, Penny. I may not have mine up until tomorrow or Tuesday, so hopefully no one needs to wait for me to post their intros/characterizations, etc.
In The Sunday Group → 5 mos ago Forum: Advanced Roleplay

Added my character and her rather direct opinions!

Nice work! I'll see about putting one together as well for Alyx.
© 2007-2017
BBCode Cheatsheet