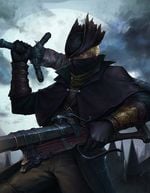 In any case, I hopefully have Arcturus positioned for the time skip. So long as nothing impedes him, he's gonna finish searching the reception before using whatever furniture is suitable to fortify the clinic door (and windows if there are any) from the inside. Once he's done with that, he'll peer into the lantern and see where it takes him.
In Night of the Hunt - a Bloodborne RP → 1 mo ago Forum: Advanced Roleplay
Arcturus remained rather quiet through the continued interactions between the other hunters. He was pensive, dwelling in his own thoughts and electing to listen rather than speak. There was indeed a lot to think about. Such as Victor's suggestion that whoever ran the clinic had wanted to study them, that their special transformation had been expected even. What about those patients who had black veins? Was that expected too? The result of some experiment? Then there were the notes on the floor, eagerly rolled out and presented with a sense of urgency by the ephemeral little men. He had yet to read the second message, but the short exchange between the other two new hunters did not escape his attention. "Saint," the one with the unhinged jaw had said. That poor girl in the doorway, Adelica. Whatever had been written was apparently in reference to her.

Without the immediate means to address such matters, however, Arcturus soon turned his focus back to searching the clinic for his contract. Perhaps there might be some drawer hidden away amidst the blood spattered mess, within which he might find what he was looking for. Something that would remind him what exactly he'd agreed to in exchange for a future. With a methodical focus he made his way around the reception, inspecting the contents of shelves and sifting through debris. If the contracts of the newly transfused hunters were indeed kept there, he hoped said records hadn't been torn or stained during the attack...

Occupied as he was with the reception's furniture, the tall young man was rather out of the way when yet another hunter emerged from the ruined doorway behind them. He heard her before he saw her, the chime of clinking trinkets announcing the diminutive woman's presence. Arcturus stood up straight as she announced herself, turning to look over his shoulder with an appraising gaze. Not much could be seen of the huntress from the angle he had. Her cloak saw to that. However that same cloak, and the attire which it accompanied, was quite curious in its own right. The many charms upon her clothing gave him the impression of a superstitious disposition, while her cloak itself looked better suited to life beyond city walls. Perhaps she was some sort of woodsman? Judging by her accent, she seemed foreign to Yharnam as well. Although unlike the imposing gentleman who had awoken not long ago, this huntress seemed already well adjusted to the situation she found herself in.

While he looked on, Arcturus idly set his sword down against a nearby piece of furniture, finally retrieving his gloves from his coat pocket. He began to pull them on, the fine burgundy leather fitting neatly over his slender fingers. The second glove was halfway onto his left hand by the time he noticed-

Where was that imposing gentleman?

It was Victor who called his attention to it. Someone that large couldn't just up and disappear. Only that's exactly what happened. The words of the ethereal message echoed in his head as the newly awakened huntress described it, how the large man had fallen asleep and vanished. Arcturus hadn't seen it himself, but an uncanny shiver ran down his spine as he imagined the scene.

“Glance calmly upon the lanterns pale gleam,
and find safe haven within the Hunter's Dream.”

His piercing blue eyes flicked between Victor, the woman, and the lantern as he listened. His hands were momentarily halted in the act of pulling a glove on. Finally he slipped his hand in the rest of the way, flexing his fingers in the tight leather while the church hunter recounted having witnessed an invisible horror outside the clinic. Another invisible thing able to make people just disappear. The thought was terrifying, and prompted Arcturus to cast a worried glance towards the exit. Towards where Lady Adelica sat, exposed to the open air behind her. It had become surprisingly easy to believe that such a monster could exist just beyond the walls of the relatively safe clinic.

Yet still Arcturus felt no danger from the lamp. At first thought it made sense to connect Victor's encounter with the disappearance of one of their comrades, but one look at the pale blue gleam made him doubt that logic. It seemed comfortable. A beacon heralding the supposed safe haven of a dream.

The room seemed to grow darker in the edges of his vision as Arcturus silently regarded the lantern. Where had that gentleman vanished to exactly? How could someone travel to a dream? Was he truly safe, or was Victor right? Was it simply a trap set by the mysterious predator supposedly outside? Like a silvery blue candle alight in the darkness it tugged at his curiosity, that pale flame inviting him to chase after it. Like the fond nostalgia of a long forgotten fantasy.

'Blessing.' The young man's surroundings came back into focus as mention of Adelica shocked him back to reality. How casually Victor spoke of offering her blood, even the green cloaked woman seeming unperturbed by the proposition. That was one concept he still hadn't acclimated to. One concept he didn't want to acclimate to. For all his talk of sainthood and blessings, the church hunter seemed to speak of his charge as if she were a resource. A glorified convoy for healing blood.

Was that where all the blood came from? Young women groomed into 'sainthood?'

Arcturus flashed a sympathetic glance in the girl's direction as he turned to retrieve his sword. It seemed the others were about to get moving, which meant he had to decide what he was going to do. Originally he had been set on following Victor to Cathedral Ward. It had seemed the obvious choice before the burly gentleman disappeared into the lantern. Now, however, he wasn't so sure. Torquil (so that's how his name is pronounced) was already staring into the lantern, even after the others had already begun to leave. Not to mention Arcturus still hadn't finished searching the clinic reception.

The young man mulled over his decision while he followed after the other three, heading for the door, before stopping right as he reached the exit. He took in a deep breath of the chilly outside air, his piercing blue eyes flitting down the empty cobblestone street beyond. It was then that an idea occurred to him.

"I'm going to stay behind." Arcturus decided out loud, finally speaking up again to announce his intent. His voice was clear, confident, displaying his foreign accent to the one hunter who hadn't heard it yet. "I'll fortify the clinic from the inside, then reinforce the others through the lantern in case they're in danger." He primarily addressed Victor as he spoke, an authoritative energy behind his voice now that he'd made up his mind. With a nod and a firm "I wish you luck!" he then backed away from the door so it could be closed and locked.

By the time he turned back around to regard the lamp and the gruesome sight it illuminated, Torquil had already disappeared. He was left alone in the ravaged clinic. Nothing but the sleeping, the dead, and the little to keep him company. What a night he had awoken to...
In Night of the Hunt - a Bloodborne RP → 2 mos ago Forum: Advanced Roleplay
I'm still around! Sorry about the long delay again. I'm wrestling with a case of accidentally becoming nocturnal, it's done nasty things to my productivity.

I'd like to get that post I've been promising out before a time skip, but I also don't want to hold the rp back, so I'm fine with a fast-forward if you want to do that.
In Night of the Hunt - a Bloodborne RP → 2 mos ago Forum: Advanced Roleplay

I deliberately avoided mentioning your character, @DrabberRogue, but it would still be appreciated if you could maybe manage a line of dialogue or two, at least?

Roger that, in that case I'm gonna aim for putting up post within the next couple days. It's about time I got back into writing.
In Night of the Hunt - a Bloodborne RP → 2 mos ago Forum: Advanced Roleplay
Ah, sorry I poofed. I guess I was a little too optimistic about being ready to post again. I was also unable to get online for the past few days, so that's part of why I've been offline.

As of writing this I'm actually not sure I'm quite ready to make a post yet. I'm gonna keep the site open to make sure I don't vanish again though.
In Night of the Hunt - a Bloodborne RP → 3 mos ago Forum: Advanced Roleplay
Apologies for my hiccup in activity, I was in a funk all last week. No drive to do much more than lay around and listen to Youtube.
I have returned, however, and plan to engage in posting! Gonna try for tomorrow.

Also I've a question. How're you gonna handle Adelica? She seems like she's still pretty important, but without Ashgan... Is she getting NPC'd for the time being?
© 2007-2017
BBCode Cheatsheet