Physical description: Stands some 6’2 tall with a slim, lean build. 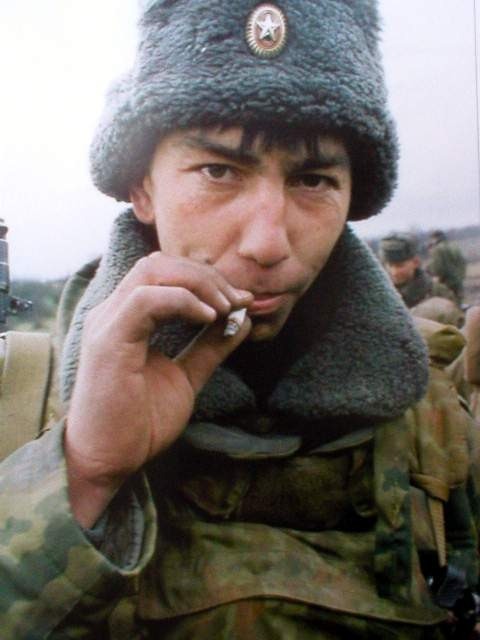 History: Aslan was born in a pissant village in the mountains South of Grozny to his father, a local police chief and his second (polygamous) wife. (The Dzhabrailov family consisted of Papa Abdulbek, two wives, and thirteen children.) As the USSR collapsed, life in rural Chechnya didn’t change much until in 1991 Chechnya was declared an independent state. His father became embroiled in the chaotic politics of the new state as he opposed the declaration of independence but said he would not oppose President Dudayev.

Aslan grew quickly in his youth, and with his 5’10 he was deemed fit enough to join the Jihad against Russia in 1996, merely aged 14. Aslan had his first tastes of battle during the Shatoy Ambush and the subsequent Battle of Grozny. During the period of De Facto independence in Chechnya, a mixture of arms trading and controlling the border with Georgia made Aslan and his family rather well-off. However, the dream of an independent Chechnya quickly collapsed as Arab and Afghan Mujahideen took over the little statelet, and the local government proved incapable of performing the most basic tasks of governing a country. As the economy collapsed, these crime bands resorted to kidnapping and trading in drugs and (Russian) slaves. Abdulbek tried to use his power to prevent this, but one Jihadist band found this to be a good opportunity to get rid of him – kidnapping his wives and two of his daughters and demanding either two million dollars or Abdulbek’s death or exile for their safe return. Because his death or exile wouldn’t guarantee this safe passage, all the men and boys gathered what money they could which totalled around $400,000 less than what was demanded. The kidnappers agreed to accept this sum and returned their hostages, battered and defiled.

The Dzhabrailov and their clan swore to work for the end of these people ever since. Their time, however, would come. Abdulbek began to command a certain moral authority on top of his temporal power as police chief and became something of a feudal lord of his region, protecting the people there in return for food, money, services, or whatever he needed at the time. It was in that capacity that he could join arms with the Russians in the 1999-2000 war in Chechnya. Although their combat power was limited, it proved to be a severe headache for the anti-Russian forces in the region. By the time the war ended by the summer Aslan wanted to weigh his options, but time for that was cut short as his father was assassinated by Anti-Russian insurgents. Aslan, with no skills and not having spent a day in school after he turned 8, had no future except for doing what he always had done; fight. He decided to join the Russian Army and streamed to the GRU Spetsnaz.

His exact service history is a mystery, however. He rarely, if ever, talks about it but between all the black lines in the reports it can be deduced he served as an operator in the Northern Caucasus Insurgency and dodged fair few charges of war crimes. The part with even more black lines hint to service with GRU troops in Ukraine. There’s also one with less black lines, which detail service in Syria as a Forward Air Controller attached to various Syrian Army units and independent operations such as VIP capture, hostage rescue, and sabotage.

Psychological Profile:
Arslan’s perception of the world has been shaped by war and is always viewed through the lens of conflict. In every long-term social environment he looks to identify an in-group of people who deserve his trust regarding everything he or those dear to him own, and emotionally walls himself off to those who come from outside of that. In this case, the people in Centurion are his in-group.

Arslan has a deeply collectivist view of his team. It cannot be stronger than its weakest link, and thus slacking is something to be avoided at any point any degree of seriousness is required. To people who he does not open himself up, even those in his in-group, he will seem very cold until he finds common ground on a personal level, when he will warm up. He remains, however, embittered and is hard to activate into someone jovial. However, he remains a religious (Sufi) Muslim in spite of his experiences – he perceives no justice in this world, so he hopes and prays that there is in the next.

People don't really know much about it. What scandal? Yeah, the Watergate scandal never happened. What are the butterflies? A pretty big one; The Republican Party maintained control of congress in the 1974 midterms and so military aid to South Vietnam was never cancelled. As a result, South Vietnam is still kicking - as are the Khmer Republic and the Kingdom of Laos. However, the latter two nations remained embattled and mired with communist violence. During Carter's presidency from 1977 to 1981 the situation escalated with cutbacks to these three nations. The coalition government in Laos has collapsed, reigniting the civil war, and the Khmer military lost much of the countryside to the Khmer Rouge. South Vietnam is still looking good, but that situation is not going to last long if the CIA is to be believed.

In 1981, Ronald Reagan became president. His administration did away with the old strategy of containment and instead adopted 'Rollback'. In that Grand Strategic objective, the US is once again scaling up military aid to South Vietnam, the Khmer Republic, and the Kingdom of Laos. However, it is apparent that this will not be sufficient - there needs to be direct American involvement even if Columbia suffers from Vietnam syndrome. As such, it is to be kept under the table. This Aurora business is a big deniable op.

What is Aurora, you may ask? It's a joint venture between the US and the Republic of Vietnam. It's the codename for a special forces team that operates in South Vietnam, the Khmer Republic, and Laos. The idea is to support the armies of our allies through intelligence gathering, searching and destroying larger targets, and other short, high-intensity operations. Its existence is only known by the President, the Secretary of Defence, and the right people in the Pentagon, the CIA, and South Vietnam.

The date is November 1981, and the task force is materializing. After careful screening and selection, a number of American and South Vietnamese personnel meet up in Tan Son Nhut airbase to start their jungle adventures.