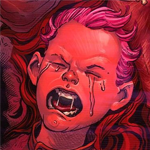 What do you mean by origins? She was born with the power but it didn't really show up until she was about 8.

Oh, I understand Dizzy. But could you describe why she has this power? Normally humans don't have powers, so what gave her those powers? Is it a genetic mutation? Or perhaps the result of a ritual?

@QuinnWolfe I think your CS is pretty much good to go. I'm just going to ask you to fix the image. Oh, and I'm going to add a subplot section, so I need you to add that to your CS too.

Story: Robert is the result of a rare genetic combination. His mother, Alyssa Genévrier, is only a human woman, but his father, Nestor Kalison, is himself a rare hybrid, son of a Dark Elf and an Asgardian God. His parents met in the early 90s, by chance in an alley in Paris. Nestor was evading his responsibilities as commander of an ord of dark elves that was preparing to invade a peaceful planet. Despite having been raised in Svartalfheim, the Asgardian morals he learned from his father carried more weight in his personal ethics. From the moment they met, Alyssa and Nestor stayed together. It had been almost like a meeting of souls. Alyssa already had a well-known and respected fashion studio in Paris and, within a short time of dating, Nestor was already living with her in a penthouse in the city of light. Despite being half dark elf, the Asgardian genetics had overlapped Nestor, and apart from the gray skin and irises and pointy ears, he looked like a human man. He hid those traits with magic. He didn't hide his extraterrestrial origin from Alyssa for long and it didn't hurt their relationship.

A few years after the wedding, Alyssa became pregnant. The pregnancy itself was a concern for the couple, as they were unsure whether a human body would be able to carry such an unusual hybrid. But Robert's birth was peaceful and quiet. The boy was handsome like his parents and the only distinguishing feature he possessed was his piercing gray eyes. His childhood had been extremely happy and brilliant. His mother's brand was growing like never before and was banking on a more than comfortable lifestyle. Nestor, on the other hand, always sought to educate him in the arts in which he was trained. Not only did he master Svartalfheim's combat techniques and technology, he also knew some Asgardian magic. He taught his son the basics, such as a transfiguration spell and how to levitate light objects. Furthermore, he taught him to control his physical strength that was far greater than that of children his age and to wield the legendary Sword of Fu Xi that he had earned in his years of battle in Malakith's army.

With the awakening of his teenage years, Robert began to realize a different side of his powers. He didn't accept the oppressive social hierarchy of his school in central Paris, where older students abused younger children, extorting and beating them. He began to not only defend his teammates physically, but also use his illusion-casting powers to frighten bullies. When he was close to turning 15, he began experimenting with alcohol. He could easily transform into a grown man and buy drinks without anyone knowing. The next two years were the heaviest of her adolescence. He spent most of his time in underground nightclubs in Paris, drinking and abusing drugs. It wasn't until 2013, when his father suddenly disappeared that he decided to change his habits. His mother looked destroyed. This was not like Nestor. He wouldn't just disappear. But neither Robert nor Alyssa had an explanation. He needed to be firm to help his mother withstand the pressure. He quit drinking and drugs and decided to enter university to study Art History. In the meantime he would go to his mother's brand headquarters to help her with management.

Appearance: Robert is a tall, strong and very handsome guy. His face is extremely angular and his unusual piercing gray eyes are the most striking feature of his face. He is 6'2 feet tall. He usually wears haute couture clothes, like Moschino, Versace and Kenzo, usually in streetwear style.

Sexuality: Robert is a gay man.

Dislikes: The deep ocean, folk music, swamps, Taylor Swift, people who get more attention than him.

Recruiting: Describe here how Black Widow or the Vision (perhaps both) contacted your character and recruited them into the training program.

Subplots: Describe at least two subplots you would like to develop with your character through this RP

Character gallery - a little collage of images that represent your character (optionl but if you decide to use it, must be 350x300)