STATUS: I never use this box. Don't know why. 3 yrs ago 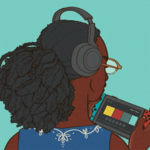 3 yrs ago
Current I never use this box. Don't know why.
2 likes

In Titans Academy → 1 day ago Forum: Casual Roleplay
Kijani was present in the War Room like so many others. It had been a requirement, after all. However, as soon as she heard the ginger in the horribly clashing costume open his mouth and start berating the team in general, her ears shut off. It wasn't her fault she was working with a bunch of amatuers. Certainly that was the fault of those who were supposed to teach them, wasn't it?

If she had to be present, fine. But that didn't mean she had to be lumped in with the children. She found an unoccupied corner and retrieved a book from her back pocket. Then she leaned against the wall and started reading. The library here was quite good, but she could feel some of her language skills getting stale. No sense in wasting time. Reading in other langauages always got her brain going. Soon she was deeply involved in re-reading an excellent Russian translation of The Silmarillion, and ignoring everyone around her.

Midway through a mock battle between Grapedrink Punch Girl and American Ninja Warrior, she found space to use the digitizer. She left her shoes outside the machine - they were far too expensive to be atomized - and stepped in. Seconds later, she was out again, dressed in a brand new suit. The suit itself was lightweight. She liked how it flexed when she walked. The shoes were interesting as well. Snug like sneakers, but more like pointe shoes at the toe. Obviously they would need to be properly broken in. The colors were nice - brilliant crimson, with a rich gold. The material would take some getting used to, though.

All it lacked was a symbol. There wasn't even the "T" that some of the older members sported. It made sense - she was still on the fence about this hero business. If not for Cyborg, she would have been long gone.

By the time she was done checking herself out, Arsenal was making a last call for fighters in the War Room. She might as well see if any of these kids had any talent. So far, the only one she'd seen that was worth watching was Apparition, or Arina. And Kijani wouldn't dare say that out loud. It would go straight to that snobby bitch's head.

"Fine. I'll go. One side, brats." She strode forward, and whoever was in her path would need to move or get checked.
In Star Wars: A Legend Reborn (Nobodyman123 and Mistress Dizzy) → 2 days ago Forum: 1x1 Roleplay
Kijani relaxed slightly upon seeing that her words had hit home. She was certain that no one had ever spoken to him in such a way before. Oh well - she'd do it as many times as she needed to. Sometimes the crown was not a weight on the head, but a shackle around the ankle. She did understand his position, though. Their allies were limited - the plan had to be airtight to be worth risking anyone's life.

Kijani went ashen at the mention of Lord Vader being sent to kill Adam. Cold and nausea washed over her in a wave. "Oh, no. No, no- we have to warn him. We have to find a way to-"

The speakers pinged, and Eskel's message, the very message they'd recorded earlier started to play. It seemed Adam had reached his goal. It was too late to warn him. Now everyone would know where he was! Kijani couldn't breathe, suddenly.

"...Adam." Her voice was suddenly an airless croak. It was like she could feel the icy hand of the Dark side around her neck, squeezing.
In Hopefully Sanctuary → 3 days ago Forum: 1x1 Roleplay
Devika could feel Roxy's frustration, since they were quite close. But public arguments were just... tacky. "Very well." She went back to eating her own food.

After everyone was done eating and had some rest, they went back to the game section. The crowd had picked up a bit but still wasn't overwhelming. There was a game that was new to this carnival, called Jacob's Ladder. The ladder was unstable, and on the bottom was thick padding for when you inevitably fell off. The top had a bell on it. It looked like fun to try, but quite impossible to win.

I just found a wiki for this old series. Wow.