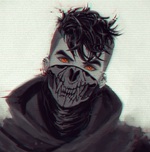 5 yrs ago
When you're so hungry that you order food delivered and then end up with food poisoning. Yuck

In Post a random fact about yourself. → 8 mos ago Forum: Spam Forum
Apparently I remember my password to this site. But I don't see any names I recognize.
In New Beginnings Tournament. → 4 yrs ago Forum: Arena Roleplay
Sorry, I've been a bit M.I.A. recently.

I'll get Rilla on it. Meanwhile, feel free to roam the lobby. Lol
In ...Dearly Departed... - Rilla vs DavidSPumpkins → 4 yrs ago Forum: Arena Roleplay

@DavidSPumpkins
Are you Skallagrim in disguise?

No. He's not Skall. He's a former member of the site Rilla, Xavier, and I came from. Before we came to guild.

Except, not using a name I would expect. Was Bubba taken? Lol I'm sure Soulless probably was.
In New Beginnings: Round 1 - Vallen and Sutemasu → 4 yrs ago Forum: Arena Roleplay
Which makes Dark light winner, by default.

In a space and time far from peering eyes, closed off from the many worlds and dimensions that exist around it, extends a beautiful Forest. It's lush green landscapes are only paralleled by the glistening emeralds that lay scattered throughout, emerging from the ground in awe-inspiring spirals, sticking from trees as if delicate fruits ripe for the picking. A once sacred land, now thought to no longer exist. At one time, it had. Creatures far and wide would come gaze upon the spectacle that was the Emerald Forest. It's magic and secrets sat deep.

But even still, among the beautiful shades of green, something breath-taking exist. Both light and darkness, beginning and end battle it out. Up top a stone slab, a lone ancient sage sits. A red dust permeates the air around him, as glowing red veins seem to grow from the stone slab that he sits upon. A long sage's robe covers the man from his neck down to his feet, that lay tucked under him as he sat. His eyes peered into great distances, a sharp red. It wasn't a red of evil, but simply of pain. The rest of his guise was hardly visible, covered under layers of coarse grey and white hairs, that stretched the top of his head, down most of his back, and from his face towards the ground below the slab. And although this forest may have been forgotten, the man that sat upon this pillar was not. His descendants dream of his face and his words. Guided by the powers of the Red Sage. His enemies and enemies of his kind dream only of the terrors that he means them.

But now, in this place, something this way stirs. a wind flows through the forest. A sharp wind. The trees creak and moan as if suddenly hit by an unrelenting force. It had been a long time since a wind had swept these lands. And for the first time in years forgotten, the Red Sage stirred. He could feel the hard chap of his lips, The dry thirst in his throat. The brittle fragility of his bones ached his body. The red in his eyes softened till becoming a deep grey blue. A gasp escaped his throat, echoing through the forest. Something was calling him. What was this? Was it a child of his? A descendant of a bloodline long forgotten? Or perhaps something much darker, more evil.

He could feel something different. A Change had come, and a new change was just beginning. One that required him to awaken from his position. The fabrics of reality were secure. But, now a new threat had emerged in his absence, but things would not be the same as before. No, all of the Multiverses had changed. He wasn't sure he'd even have friends anymore. His brothers in arms... He closed his eyes as he trickled his thoughts across the realms. He could not feel them. Even the one known as Rilla, he could not sense. Though, he could feel the treachery of his offspring.

"Jynx." He finally whispered. His old friend had fallen, and in his place, the Heir to the Empire's throne had risen. How had he let this happen? He whispered names as he felt for other presences. "Aniya... Scream... Jacob... Naosie...
Phoebe... Abyssmir... Joseph... Wyatt... Athena... Dems... Sky... Terra... Ezekiel... Ro'man..." There were many other names as well, and to him, they all meant something. Many still lived in far off universes. Others had passed on. He pondered how long he had been away, Time worked differently across the verses. So, it was truly relative. Then he pondered on what had woke him. He was unsure. But, a presence did stick out to him. A lone man, meditating in the distance. The sage could almost make out his face. He was surrounded by powerful forces. Some he recognized, oddly. Though, he wasn't quite sure how. His gaze fell once again upon the meditating man. He wasn't sure why he needed to be there, but he was sure that's where he was going.

After several grunts, something peculiar happened, the cloak of the sage seemed to rise, as the old man with it seemed to do as well. Power swirled up around the cloak, and red lighting flickered though out the Forest, in an horizontal fashion. The greys and whites of the sage's coarse hair seemed to fall away, revealing a fresh younger face. The wrinkles that gripped his eyes seemed to pull back and his skin became soft to the touch. The Blue Grey of his eyes flickered with excitement followed by a fiery red, that suddenly flushed to an emerald green. His hair was shortened, and full of red, the common color of his people. The old sage's robe fell away and under it, was a young man in a red and black armor, lined in gold trimmings. A gold V portrayed across his chest. It had been too long since he felt like this.

With a flash, he left the forest behind him, and he stood in the lobby of Liaison's Tournament, his eyes fondly searching the screens a bright smile across his face. He had finally returned. And the Entire Multiverse was sure to feel it. He couldn't hold it back anymore. He screamed a battle cry, followed by, "My Name is Astor Raeym, and I have returned!" He glanced around briefly at all the people sure to be looking at him with peculiar gazes. The only thing that seemed to be missing now, was none other than Rilla Tsh'Rael. He'd pull the dead stiff from his cold grave and bring him back himself if he had to. They needed to continue their fight.
In New Beginnings Tournament. → 4 yrs ago Forum: Arena Roleplay

I've yet to be accepted.

You'll have to post your character in the character area, before it will be judged. At that point, Ill be sure to poke Rilla to get him on top of it. He's very lackadaisical, so often needs prodding. Which is why I'm here. Lol.
In New Beginnings Tournament. → 4 yrs ago Forum: Arena Roleplay
Once Buddah post, you'll have a limited amount of banter time before Rilla prepares and post the fights. Once you have your assigned fights, you will proceed to the teleportors located in the lobby. Your fights will be located on separate threads, obviously to make it easier on you and the judges and in this case, mentors, to keep track of. The fight post will have a somewhat detailed description of where you will be fighting. You will take it from there.

The initial post in the fight, you are not allowed to make any kind of attacks. Rilla will decides who post first. So, first 2 post on the thread should contain no attacks. The 3rd post, which should be written by whoever went first, should contain the first attack. However, that isn't required. But, it's open season at that point.

Remember this, because it is used in any arena fight you'll have here. Except for who goes first. If you participate in a fight outside of the tournament, it will be up to you and your opponent to decide. I think there usually is a general rule of challenger making the first post. Though, it's still up to you both. But in a tournament setting, the host will generally always make that decision, often through just some kind of randomized process.
In New Beginnings Tournament. → 4 yrs ago Forum: Arena Roleplay
A mentor isn't required to participate, though... it would be idea of we could get everyone one. We have the people, just a matter of getting them to stop being lazy. Lol
In New Beginnings Tournament. → 4 yrs ago Forum: Arena Roleplay
Actually to me, it sounds like it would be super fun. Cause, he has to out think his opponent. Just because there is a disadvantage doesn't mean he can't walk away the victor. He just needs to be that much more cunning.

My trainee has also expressed concerns regarding a certain character, and their advantages. But I'll tell you like I told him, this is a learning experience for you all. And a disadvantage could easily become an advantage, with the right plan of action.
© 2007-2017
BBCode Cheatsheet