11 days ago
Current Desktop profile login won't work. Coincidence that Windows 7 is no longer supported on same day? Consider me doubtful.
4 mos ago
I wonder why I have no notifications, then I realize I forgot to sub to my own threads. Whoops!
5 likes
1 yr ago
I'm having way too much fun with my Legend of Zelda Encylopedia. This is the game that got me into roleplaying so have a lot invested in it's lore and stories. Too bad can't have all the games too.
4 likes
1 yr ago
It's begining to look a lot like Christmas...too bad it was already looking this way back in October...
2 likes
1 yr ago
Whew, looks like only 5 days, stupid thing showed me six just to try and scare my pants off...

So, haven't heard a peep from either of you for a while so unless I get a post from you before the next monster attack. Your characters will be defeated and you shall be dropped from the role play. At that point, you will no longer be able to rejoin and I will open up the role play to one or two new people.
In UNFAIR MONSTERS → 3 days ago Forum: Casual Roleplay
@AdmrlStalfos19@Saltwater Thief@Duoya Just a friendly poke, wondering what you guys been up to that I haven't heard from recently.
In UNFAIR MONSTERS → 3 days ago Forum: Casual Roleplay
@medalliah@Spectral
Location: Angel City - November 26, Thursday
Event: Pre-Thanksgiving Day Parade

Humans were a unique bunch to be sure. Here they were milling about in costumes, baking a variety of treats, and preparing together a parade to go through the city streets. Why did humans go through all the extra trouble? Because they wanted to remind themselves of their past. Apparently the best way to go about it was to make everything as bright and colorful as possible, with the exception of the pilgrim costumes which tended to be rather drab.

Not one to miss out on such interesting festivities, the Entity had decided to dress up for the occasion. It certainly made for a striking Native American though on closer inspection that the Entity's version had a bit more of a, Central American style than most of the others who had the North American style down pat. Frankly, it looked a bit like a colorful rooster as a pair of golden eyes took in all the sights, sounds, and smells.

Thankfully, as it was Thanksgiving people were unusually generous, which meant free samples. Course the good stuff one still needed money but at least they were able to get a taste of what was out there. At the moment, they had a small cup full of candy corn and pretzels it has been given at one of the newly erected stands. They popped a candy corn piece in their mouth and let the sweet flavor assault their senses.

"Ohhh, not bad, not bad, though I have heard too much can be detrimental to a human's health." The Entity shrugged and popped another inside, it appeared many people were heading for the side streets where various booths where people sold trinkets and other items for the crowd's pleasure. As they looked around, it noticed two of the new warriors had already joined the fun.

Before long though the beast decided on what it hoped was an effective escape route. The Cucco bolted for a small ledge that would be enough of a drop that could potentially hurt someone if they jumped off, but a feathered friend would be just fine. Yulen quickly saw through its scheme however.

"Oh no you don't!" With a burst of speed he reached out and grabbed the chicken wanna-be by the leg as it tried to jump off. The Cucco flapped furiously to try and escape but Yulen held on firmly, not about to let the escapee get away. With all the energy in the thing though as it tried to break free, Yulen could feel he was dangerously close to slipping off the edge and taking a tumble.

While all this commotion was transpiring, some of the townsfolk had gotten together to share stories and rumors.

"I don't think I've seen a single Goron even on the Death Mountain Trail for around four months now. Sure they usually just stick to themselves but it's just strange."

"Come to think of it I haven't seen that one guy who likes to visit from time to time. Can't remember his name...or are Gorons its?"

"I'm more concerned about the trails recently, I occasionally like to find rare plants or barter for ore but a lot of skulltulas, tektites have popped up recently. I'm getting too scared to try and climb up the mountain anymore!"

"Whatever happened to that man who went up a few months ago anyway?"

"You know that big fellow with that striking red hair!"

"Oh him? Don't know but I think someone saw him head back down soon after. Certainly was a unique looking fellow."

The townspeople chattered about their new troubles, and anything interesting that was going on in the village or in Hyrule. Though at the moment it was mostly discussions of things rather close to home.
In Bearers of Courage [IceHeart + QueenSei] → 4 days ago Forum: 1x1 Roleplay
"Everything secured up there!" Yulen's boss shouted as Yulen did the final checks of all the nails and attachments.

"It's all good up here! Well I'll just be heading off for the day then!"

"Ya ya, get going ya half-timer!" The boss grunted as he turned his attention to another project.

"Done here for now, I'll need to complete my other chores quickly so I'll have some time too..." Yulen's voice trailed off as he heard some sort of a clucking sound coming from down below. He tried to look below but some of the scaffolding got in the way so it was a bit hard to tell from up above. Yulen quickly shimmied down like a trained acrobat to locate the source. He was quickly able to zero in on the sound and there was one of them.

A cucco was busy inspecting all the boards in the house's frame, probably searching for insects or something while making its usual, annoying sounds. Yulen's eyebrows started to curl in annoyance, as a child he had had a rather...unfortunate encounter with a flock. It had scared him for years and while he was pretty much over it by now, he still harbored a bit of resentment. He crept up on the cucco, determined to make sure it couldn't mess up there work at all.

The white feather ball clucked in happiness or perhaps boredom, as it sniffed around. Yulen crept up from behind a plank, and lunged for the creature. Perhaps sensing his annoyance, the clucker noticed his attempt to grab it and with a cry, bolted for the street. In its mad rush the cucco ran right into the legs of a laborer balancing a bunch of boards, which caused him to trip and collapse in a heap with the boards.

"Come back here you feathered fiend!" Yulen gave chase to the fleeing poultry, determined to lock it up in its pen, wherever that was. Into the streets he chased after the cucco which had the advantage of being small and able to dart around people and objects to foil his attempts. Soon his focus was entirely on catching the blasted bird to prevent it from fowling up even more people's days. Soon everything else started to fade into the background as he grew tunnel vision in his quest as the bird was proving to be quite the adept runner.
In Bearers of Courage [IceHeart + QueenSei] → 4 days ago Forum: 1x1 Roleplay
The Ultimate test for a Legend of Zelda Hero. 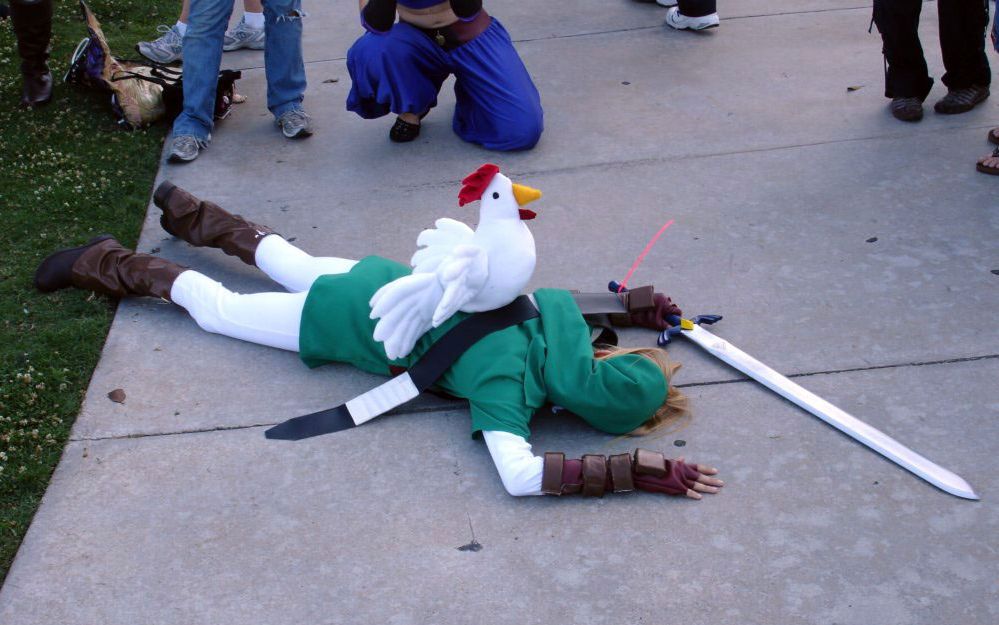 In Bearers of Courage [IceHeart + QueenSei] → 4 days ago Forum: 1x1 Roleplay
So acquaintances. Not strangers, but not even really friends yet.

I figure the first bit is just to show off some of their daily lives, how they're managing in the village, to establish the characters a bit. Maybe meet up somehow in a bit and in the meantime there will be some rumors going around about Death Mountain, increased danger, strange happenings, etc.
In Bearers of Courage [IceHeart + QueenSei] → 5 days ago Forum: 1x1 Roleplay
I guess the one other thing we should probably do is figure out acquainted our two characters are at the start. Friends? Mere acquaintances? Yulen has lived there for most of his life so would depend a bit on how long Quinn has lived there too.
© 2007-2017
BBCode Cheatsheet