STATUS: So warm and glorious... Embraced in a black mass... 1 yr ago

1 yr ago
Current So warm and glorious... Embraced in a black mass...
1 yr ago
Let us eat, drink, and be miscreants!

Jazzy Snazzy (also called Jazmine and Velvet Jaz) is a Crown Princess of Hell who governs five hundred and sixty infernal legions. Jazzy Snazzy is a Succubus Queen and the Grand Archdaemon of the Sin of Lust and is said to be the missing spirit of the Goetia.

The names Jazzy and Snazzy come from the goddess Jazithnia or from the goddess Baal-Jazanon of Carthage. Velvet Jaz is said to mean "she who induces to eagerness towards the pleasures of the flesh" in old Assyrian.

According to the Dictionnaire Infernal by Collin de Plancy she commands five hundred and sixty legions of demons and carries the title of Crown Princess. She is also an entity many looked to for assistance with fertility and childbirth, to reconcile friends and foes, and procure love for those seeking it. The pre-Kemetic Nilotic peoples viewed Jazithnia or Jazmine as their supreme Mother God; they represented her with the pale blueish skin, in a rather lewd human form that was considered appalling to many Victorian archeologists. It is said that her image,was suppressed by the Victorians.

"Jazzey Snazzey, or Jazzminin, is a vile, lascivious and wanton princess even amongst her kindred in damnation, the Incubi and Succubi, and she commeth abroad in all the likeness of a terrible, prurient she-devil, having a great and impossible bosom, with flames of fire for her hair; when she putteth on the shape of a woman, she sheweth out cats teeth and a prodigious tongue, and talons for fingers and toes like to a mighty night hawk; she is a ribald and immodest princess of all other, and understandeth of all things carnal and of pleasure, both proper and improper, she procureth favor, and reconcileth both friends and foes by means impure, and ruleth five hundreth and three score legions of devils."

And much later by S. L. MacGregor Mathers in reference to the Goetia

"The Missing Spirit is Jazmine. She is a Crown Princess great in power, and most concupiscent. She appeareth like a monstrous harlot with an inhuman bosom, crowned of her hair by flames of fire; but at the command of the Magician she putteth on the shape of a Woman with Cat's teeth beset in a wicked mouth with a tongue like a giant worm; or else like a Woman with a Raven's claws (simply). She telleth all things carnal and instructeth in the forbidden arts bothe they be of witchcraft or also of unchaste desire. She procureth feuds and reconcileth controversies between friends. She inciteth lust in any person. She governeth 560 Legions of Spirits. Her Seal is this which is to be worn as aforesaid, a symbol which can inflame the loins of any who look upon it." 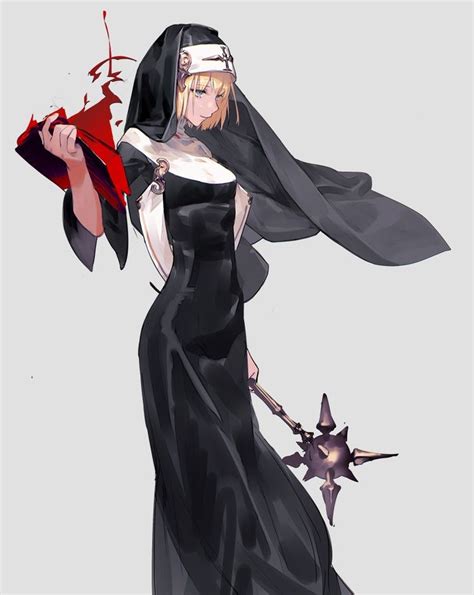 Bio
The Catholic Order of St Joan monastery in Prague raised a young orphan girl. She was taught theology, etiquette, academics, languages and many other things. She was also taught melee combat, the rites of exorcism, and the weaknesses of supernatural creatures. Before her training was complete however, the monastery was destroyed by dark forces. She fled the city and wandered the world settling into a quiet life of prayer and contemplation in a small town that would never attract the attention of any monsters.

Town Status
Shy kindly nun in the corner. She teaches classes women's self defense classes at the basement of the town library on Thursday Nights.