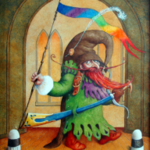 "My my. It looks like we've got a predicament on our hands. Take me up, will you?" The rifle tilted itself upward. Rui grabbed the handle of the bayonet and with a bit of force, slid it off the barrel. When it did, the paint appeared to chip off until what was left was just a standard, black piece of metal and plastic hanging from a perfectly normal nylon strap to Rui's shoulder. The two peered out of the boat's windows and up at the behemoth as they approach Liberty Island almost conveniently just in time to fight it.

It also lets players know what's allowed and what's available. Like, the Showa period wasn't very long ago at all. In that period we had: The NES, Super Mario, Godzilla, Ghibli, Kamen Rider, karaoke, and of course, the birth of Japanese Pro Wrestling.

If Japan is imperial after the Taisho era, however, there are plenty of implications and I really want answers as to what happened because maybe they pertain to my character. If it is in the Showa era, what year is it? What is Japan's foreign policy at this time?
In Kimetsu no Yaiba - Shingetsu → 4 mos ago Forum: Casual Roleplay
Sorry if these questions were asked before but:


"Tata then." It said. Rui lifted his leg up and kicked away from Nathan before nonchalantly walking off. He seems uninterested, largely in the shadow creatures, shooting them as they come close but not treating them with very much care. In all likelyhood, it must have been because they had a bad taste, or maybe whatever magic created them must have left them without a soul, if anybody had thought that far. The knife calling himself David Bowie also seemed to have some supernatural intuition, and it definitely scared Rui a little bit as it dragged him from one street to the next in search of food.

It wasn't long after Rui and David had left the half-demon behind. They were moving quickly, with the blade seeming particularly intent on finding a good meal that night more than others. Just a few streets down, there was another fight. As the rifle pointed its barrel across the Hudson River and planted the buttstock against Rui's shoulder pushing him slightly back, Rui's head slowly followed the line of bore towards a tall ninja and a short girl only for the girl to be hurled off the boat at his arrival.

Rui looked down the river and back, buttstroking one of the shadow creatures as he did. "Boy. Find a boat.
"Huh?"
"Find. A boat."

Rui was stopped for a moment until he was dragged again toward the river. He closed his eyes and jumped only to find that he was on the gangplank of a tourboat.

"Ticket please?" A suited man asked, only to be shot through the chest. Rui made a disgusted face as he ran in amongst the panicked masses toward the captain of the ship, pointing the gun at him. "Drive us to Liberty Island. Now." the voice came out of the rifle. As the captain panicked, the blade was shoved forcefully through his skull. Rui screeched like a small girl as the body collapsed, meekly kicking it away so that he had better access to the wheel.

Just like that, they were off.
In Warrior's Heaven: Supreme Anime Bullshit → 5 mos ago Forum: Casual Roleplay
Rui & David
@LemonZest1337

As the blade of the bayonet touched Nathan's claw, it seemed to rattle in place, making the distinct sound of lips smacking together. "That's interesting." Said the British voice. "You're a demon. While it might be good fun to kill you, I'm afraid you're just empty calories to me, what with the lack of soul and all." It remarked, apparently without a single thought paid to the situation at hand. After it finished its brief explanation, the rifle began to saw back and forth, meekly at first before Rui finally got the picture. It was then when the selector switch flipped itself from semi to burst.

Rui put on a nervous smile, looking very redundant to do anything. Even then, his shaking index finger wrapped itself around the blue-painted trigger and his entire hand squeezed into it. He raised his shoulder and closed his eyes but the sentience of the rifle kept it trained on its target. While still being held in Nathan's claw, the barrel heating up as three rounds of bullets flew in rapid succession straight toward the demon's throat.
In Warrior's Heaven: Supreme Anime Bullshit → 5 mos ago Forum: Casual Roleplay
Rui & David

There was a soulful humming heard down 5th avenue as bodies began to pile on, a voice which sounded like David Bowie's singing in time with the rhythm of a firearm shooting in a three-round burst.

"Busier today, huh?" Rui asked as his arm was dragged toward the left. He turned his head, squeezed the trigger, and a shot was fired into a man's chest.

"I hadn't noticed." His weapon replied to him in a gleeful tone, barely able to contain its laughter each time a round fired out its barrel.

For a gun, Rui's firearm looked a bit too flamboyant, painted blue and covered in yellow stars. It looked more like a plastic toy than an actual firearm and the way its bayonet sparkled made it look almost as if it had been wearing make-up. That is, if knives could even wear make-up.

The gun pointed itself forward, ready to fire once again, until someone had appeared, apparently out of a tree to stab his target with a set of claws. ( @LemonZest1337 )

"Excuse me." A voice sounded out from the direction of a shy-looking Japanese man in a business suit carrying a pastel-colored weapon in his arm and a wooden plank on his back, but it did not sound like the man in question. As far as anyone could tell, it had a British accent, and indeed, the man's mouth didn't even move. "That was going to be my kill. If you would be so kind as to go somewhere else, I might even-" the voice stopped itself as the Japanese man was dragged forward, leading by the bayonet and toward the clawed man.

Rui huffed. His nose was stuffy and he wanted to go home, yet there he was. His legs moved reluctantly as his weapon lead him toward danger, ready to stab another person, the bayonet aimed squarely toward Nathan's chest.
© 2007-2017
BBCode Cheatsheet