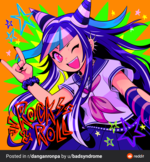 The premise would just be a high school club for people with Epithets. They work on developing their abilities, which conviniently creates a lot of room for exposition. There wont be any adventures or large scale battles unfortunately; just normal superpowered high-schoolers trying to figure out how to live their lives in an unfair world.

I want the rp to be mostly character focused. Anyone interested should spend an hour or so at least just thinking about who their character is and what struggles they should be trying to overcome. Important note here: the conflict will all be eternal or interpersonal, and because conflict is what creates a good story, everyone should focus on making characters with these conflicts baked in. I imagine each character should have a rough sketch for how their arch will turn out throughtout their days in the club.

Respones would be as short as 3 sentences to as long as 4 or 5 paragraphs, depending on context. If any violence happens, go ahead and pm whoever else is involved and discuss how the fight will end and how much people will get hurt before hand, so people know what to expect and how to navigate the event. Otherwise navigating a combat scenario with no rules will likely result in someone being upset.

If anyone doesn't know the rules to EE, this is the document that the original players made while playing. We arent using this to rp, but rules about how the world works are baked into this document, so skimming relevant sections can be helpful. Character creation in particular has a lot of helpful information.

Remember, we arent using this ruleset per se. You can just choose an epithet you want, for example. But this is the document they used to make the show, so giving it a look over helps to contextualize some things.

Note: Im new here, so if anyone with more experience could help run this or even just direct me to some good rescources I'd really appreciate it. Thanks in advance.
In Hello → 5 mos ago Forum: Introduce Yourself
I've done roleplay for awhile, usually sporadically. I enjoy some combat, but not too much. I usually want to spend about 2 minutes doing other roleplay for every mintue of combat, and that was in DnD where combat was a larger focus.

I'm fine taking control of rps to move them forward, but dont like being forced to. I make sure to give everyone "turns" to affect whats going on in a meaningful way.

Im a girl, college age. I won't tell you much more about my personal life, please dont ask. I will discuss any kind of nerdy media with you, though, so please ask about that.