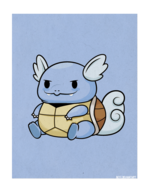 In D&D 5e - Asembia: Untitled Roles → 5 days ago Forum: Tabletop Roleplay
Quick update about IC stuff:
For anyone that happens to look outside from the small fort, the current time would appear to be close to noon time.

Sorry for the confusion, I meant Angus and Orchid. Aron would have also recognized him, but I didn't mention him checking the teleport room with you three in there.

My other excuse was that I really wanted to just make a post as my last IC post was quite some time ago and did not want that to go any further. That and it was getting rather late in the night when I made the post, so I may have not fully been there as I tried to connect my thoughts lol
In D&D 5e - Asembia: Untitled Roles → 6 days ago Forum: Tabletop Roleplay

@Expolar
What was Tenkern Swiggin like exactly? Was he nice? Was he nasty? Did he ever mention where his family lived?

Also, would an arcana check of 11 offer any clues about the magical cloak?

Tenkern acted nice on the initial meeting, but during bits of conversations and travel he really sounded pompous as he only talked about himself and small business ventures.

For the roll on the magical cloak, you can only discern that the cloak is very durable than a mundane cloak. But since we are likely to take a rest, I will say that since the cloak requires attunement, who ever has it knows that is a cloak of protection. However, the glaive has not provide knowledge of its magical properties, so either you must either identify or try using it to discover and learn how magical properties can be used.
In D&D 5e - Asembia: Untitled Roles → 6 days ago Forum: Tabletop Roleplay
If you all want to discuss who to distribute the loot, you can do it in the OOC than IC. Additionally, if you all want to simply discuss and state having a short and long rest here, that is fine too as I would imagine our characters to briefly go over that decision. To help the pace of the RP, these two points will go forward for when ever anyone wants to distribute loot or group decide to take a rest.

To learn the properties of a magical item, you must cast the identfy spell on it or if you take at least a short rest with a item that requires attunement you will learn its properties.

Once you all feel like taking a short or long rest, just let me know when and I will transition the IC to after the rest.

Necklace with burnt metal head of dragon
In D&D 5e - Asembia: Untitled Roles → 6 days ago Forum: Tabletop Roleplay
In the room where all the scorched bodies remained, it took some time to safely search the bodies, but would eventually find the following. From the half elf that Angus ended, he carried a satchel under his cloak, oddly enough the cloak appeared relatively unharmed from the fire. Within the satchel was a strange book that looks cloud like, anyone who approaches and reaches for it would find their hand to go through the cloudy book, but the closer it is to Najila, its form becomes more solid. Inside the pockets were also some money. On the body of the spell caster who was presumably attempting to teleport away, did not have much of value on him, but some silver pieces and a necklace with small burned metal head of a dragon hanging. Finally, there appeared to be one other body that seemed to not have been in the crates. Angus and Orchid would easily recognize this to be Tenkern Swiggin, the human merchant that hired them for the journey and currently has a full pouch on him containing nothing but gold pieces.

In the room that Blue inspected for traps and found none, found that within the two chests were various coins and gems in one and the other containing potions. Then in the last remaining room, were various beds that were better kept than the beds in the barracks, which Layla, Azzen, and the young boy were left to rest for the time being while everything appeared calm so far. Celeste, who was hiding on the floor below, stepped out after hearing and seeing everything calm down. Once she saw Layla to be resting, she happily joined beside her in bed.

Now, out in the hall, Aron and Nadir looked to the other party members, with Aron starting the discussion. "So what is our plan? We have some people resting over in that room, but do we all plan to take a short or long rest here? For now, we may be safe here but who knows if they will return with reinforcements." Nadir cleared his throat and tried to bring some attention to himself to speak. "Resting here for now may be good for now, but I do not wish us to stay here for too long after what we all experienced. But my question now is where do we all go from here? Clearly we all came from two different sides of the mountain range that separates the Novus and Sansea territories, but the fact that we appear in the side of a mountain range and not at its base, we must have some how been teleported here onto mountain somewhere on Asembia. If anything, I would like us to move in some direction. So does anyone have some preference?"

Dragon Mask man
Magical glaive
In Keratia: Blade Maiden’s Exploits → 14 days ago Forum: 1x1 Roleplay
Hearing that their arrival to the Majadan Empire gave Caeda great relief as her worries of any other surprising events on the open waters came to a swift end. After some hours of the remaining travel and disembarking from the ship, the almost usual mundane and eventual boredom on the ship ended as her wanderlust returned as she saw the city of Kaijhong, wondering where her strange quest will take her from here. Once she knew she has everything on her, including Othie, she awaited for Sticky to finally join before she sent off.

As she saw the crew unloading and taking off to enjoy the city, Sticky would arrive stating their arrival. "Indeed we are. Now with the plans for today. The first being to find a magical healer somewhere on the city. Of course, it is my first time in this city so I have not the slightest idea of where to start. But perhaps finding a place to stay for the night or two would be best and it could perhaps supply us with some information of the city. The owner or at least someone there may know where we could find a magical healer. Additionally, I feel some income would be best before we decide to leave the city, so would could spend some time asking around for some job that fits our skill set as adventurers."

It has been some time since she gave such plans as it started to remind her guard duties back at her hometown of Bayrest. She began taking the lead looking for what could be a comfortable or at least modest enough inn to stay "Now Sticky, is there anything else you want to discuss while we walk around for a place to reside for the time being?"
In Pioneer guild → 18 days ago Forum: Tabletop Roleplay
Doing okay so far, just busy with life stuff.

I recall back in the interest check that DM Bacon mentioned having things set up in about one or two weeks. Although it has almost been 2 weeks, a lot of things could happen during that time. But hopefully everything is okay on Bacon's side.
In D&D 5e - Asembia: Untitled Roles → 19 days ago Forum: Tabletop Roleplay

Sorry for taking so long to reply. I thought I had hit the post button, but apparently not. I'm still here and will have something for the IC soon.

I too have done this in the past, so I can share the feeling lol.

Yeah sorry for the radio silence. I didn't really have an idea of what to post that I didn't already say OoC, but for the sake of a living RP I posted something.

If you don't have any ideas of what your character may say, its fine. I don't want you all to feel you have to make a post to everything if feeling uncertain of a post in a current situation. This is why I like to stick to the rule of me waiting 7 days before I try making another post to push the story along. The silence for over 2 weeks was what made me just check in to see if you all were doing okay and were still interested. So if most of you want me to simply try to push the story a bit further to help with the ideas for posts, then I will try to see what I can do depending on the situation.

Sorry for the silence on my end. RL has gotten a little crazy on my end. I’ll post IC ASAP. ^^”

Its okay. Work and life stuff have been busy on my end to, so please don't feel rush if you got other things to attend to.

In D&D 5e - Asembia: Untitled Roles → 22 days ago Forum: Tabletop Roleplay
Just popin into the OOC to checkin to see how everyone is doing as it has been relatively quiet. Turn order already ended with my last post and currently the IC is in open time for anyone to discuss stuff.

But of course, I can imagine that the daily pull into life can be quite busy as I myself have been quite busy these past weeks.
In Pioneer guild → 24 days ago Forum: Tabletop Roleplay

@Idea
I feel like saying that I appreciate the occasional poke on the RP thread to see how we are doing than just being too completely silent. That being said, how have things been on your end and how is your character personality and backstory going so far.
In Pioneer guild → 24 days ago Forum: Tabletop Roleplay
Been busy with work and life stuff, but still okay
© 2007-2017
BBCode Cheatsheet