STATUS: Fall seven times and stand up eight. 24 days ago

24 days ago
Current Fall seven times and stand up eight.
4 likes
2 mos ago
When Miley Cyrus is naked and licks a hammer it's "art" and "music"... but when I do it, I'm "wasted" and "have to leave Home Depot".
18 likes
1 yr ago
My grandfather had the heart of a lion and a lifetime ban from the Central Park Zoo. Rest in peace you strange, strange man.
18 likes
2 yrs ago
My girlfriend is always stealing my t-shirts and sweaters... But if I take one of her dresses, suddenly "we need to talk".
31 likes
3 yrs ago
My ex girlfriend had this really weird fetish. She used to like to dress up like herself, and act like a fucking bitch all the time.
11 likes 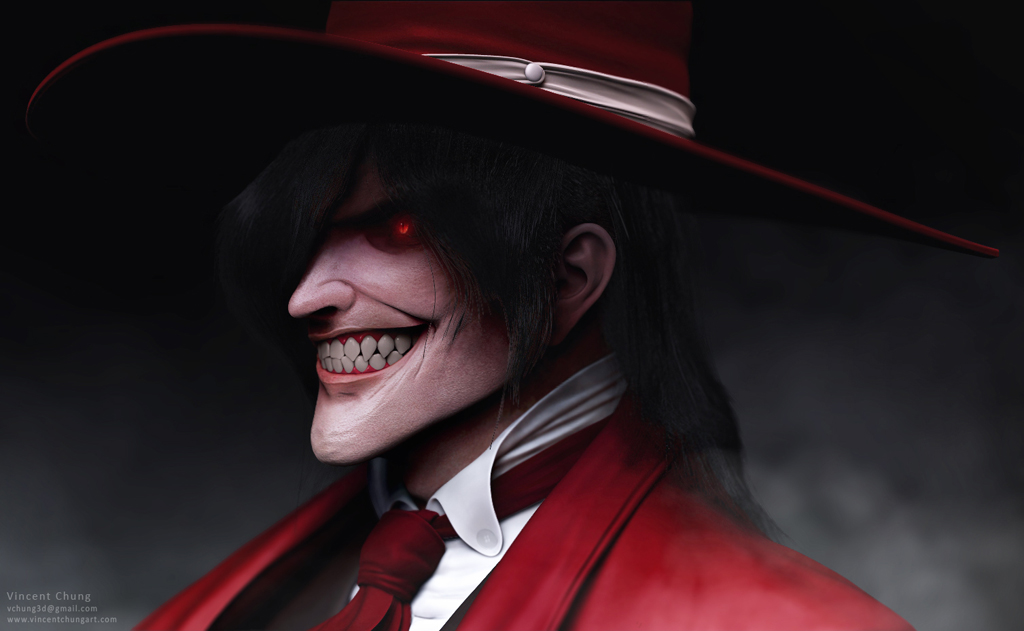 I love writing when I have the time and motivation for it. My posting frequency is generally one or two times a week on average. Supernatural, Horror and Fantasy are usually the genres I hang around most, but I'm not afraid to experiment with something new. I've made a lot great friends here, many of whom I met when creating the Red Hood universe, and am always looking forward to making more.

I tend to be a little raunchy and crude at times but if you can handle that, you'll have a heck of an RP buddy in me!

Magnificent Bastards: The Many Faces of RedXIII

In Frontier of the Damned → 1 mo ago Forum: Casual Roleplay

Jack's eyes seldom let Fenton out of their sight as they darted between him and Christina. He listened to her with some intensity that made his feeling of dread rise exponentially. Nevertheless, he forced his poker face to remain on the surface. When she concluded, all he could do was shrug.

"Welp," he said to Christina as he scratched his neck a little nervously. "I don't s'pose we really have much choice, eh?" He then looked toward the eponymous man of few words. The mysterious stranger had handled himself well enough when dispatching the undead earlier. "Whatcha think, big fella? Scared of a couple of hags or are you in?" A sideways grin crept up on Jack's face as he issued the dare. In truth, Jack was hoping he would be coming along if only so the man and his massive horse could take point and be the first line of defense.

His eyes then shot back over to Fenton. My lord, I hope he's not going, Jack thought to himself. The sight of him was beginning to induce a squeamishness. Finally, his attention circled back around to Christina.

Backstory/Motivation:
Where one there was a common peasant living amongst his fellow impoverished humans, a series of horrific events led to a transformation that would change Shannon's life forever.

As a human, he was picked up off the street, stripped down to his undergarments and forced to endure Sir Ram's experimentation, which permanently changed his biology. His skin's pigment mutated into that of an amphibian , dark green and forever glistening that requires periodic moistening. His eyes took on new form, enhancing his ability to see in the dark. Were the experiment allowed to go through its full process, Shannon was sure he'd have been transformed into a full fledged froglike Beastial.

With a little luck, Shannon was able to escape his confines. During getaway, his eyes fell upon a suit on display. Perhaps it was being stored for future engineering endeavors or maybe it was being displayed as a trophy. Under the case was a placard that simply said "Eugene 'Frog-Man' Patilio". He was running low on options. In his underwear appearing like a half-baked monster, Shannon broke into the case and quickly put on the suit.

On his way home, he discovered the suit came with its own advantages. The boots were fitted with propulsion technology that allowed the user to leap great distances. The material was built from a technoweave that not only provided extra durability, but also enhanced the wearers strength.

Hiding a face he felt was grotesque, Shannon found himself living in his suit for nearly all of his waking hours. The whimsical costume was a far better sight to behold than the creature underneath. With his new abilities at his disposal, Shannon, the new Frog Man, made it his mission to protect his neighborhood from Bestials like Sir Ram. 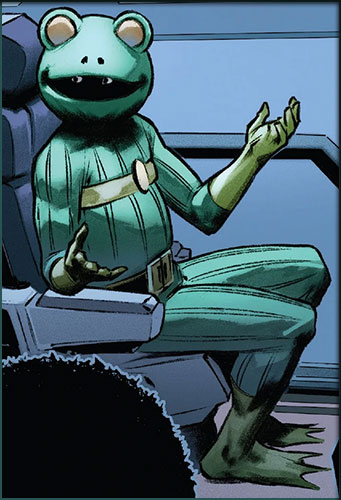 Frog Man is strong, but not necessarily fit. He is witty, but not necessarily smart. In costume, he appears to be a giant, almost cartoonish frog. Inside the costume, his hair is patchy and discolored into a dark, slick green. His skin seems permanently damp and it, too, has taken on a jade pigmentation and requires aquatic maintenance. It has been quite a while since Shannon has even dared to look at his hands and feet.
In Frontier of the Damned → 2 mos ago Forum: Casual Roleplay

"Wait!" The call was hoarse, the voice gravelly. Emerging from within the gathered townsfolk was a man shrouded in white cloth, his face mostly hidden. As he moved, he did so with evident struggle. Each advancing limp looked like it was causing a great deal of pain.

"I may... not know where... the Devil is, but I know... where they are," he said through strain. Anyone could see that there was something strange about this person. His skin was wretched, with boils on his forearms and what little you could see of his cheek.

"Yes... They. They commit all sorts of affronts... to God. They kill... experiment... torment. The dead rose from their graves today. They... might be responsible." The odd stranger traded gazes with each of those that were set out to ride. It was almost like he was sizing them up, deciding if they were up to the task he was about to beset upon them. "The whores... of Satan. The brides of dark...ness. The witches."

There was a beat of silence as his world marinated. Whispers and murmurs could be heard amongst the gathered few. It seems the women of whom the stranger spoke were owned a bit of infamy.

"I tell you from experience. They surely... do the work of... evil. It may have been them who brought the ghouls. I was once normal. Just passing through. I... made a campsite in those woods out yonder," he said with a gesture toward the west. "Had a bit too much to drink. Much too much. A woman approached the fire. She was beautiful with golden hair, pale... skin, and a voice of velvet. She brought some drink of her own. Shared it with me. Before I knew it, I was out. When I woke up again, there were more women, but each one looked more hideous than the last. They looked like that hadn't bathed in years or even seen the sun. Their features were... exaggerated. Gangly, crooked teeth, large noses, crooked backs... Their laughs. Those cackles. Just the memory of them makes my blood go cold. They did things to me... awful things. I barely escaped with my life."

"If you're looking for answers, head west, but do so with caution. You're going to need more than bullets and... shells."

"Who are you," Jack finally asked.

"I am nobody. Not anymore. But I used to be called Fenton. Pleasure to... meet you."

In Frontier of the Damned → 2 mos ago Forum: Casual Roleplay
I'll be assisting @Nobodyman123 as Co-GM with some side stories to keep the action moving while he focuses on the main plot. In order to accomplish that, I'll be throwing in some extra characters and taking some liberties with NPCs. That said, expect a new post tomorrow and a "GM" post no less than once a week.

If you want to explore some side-stories that are exclusive to your character, I feel confident in saying that we'd like to embrace that opportunity and I'd love to help you execute that sort of character development, so feel free to speak up in PMs or Discord and we can definitely get something planned.

In the meantime, double check the wheels of your revolvers and go ahead and cock those shotguns. Tomorrow, we ride. 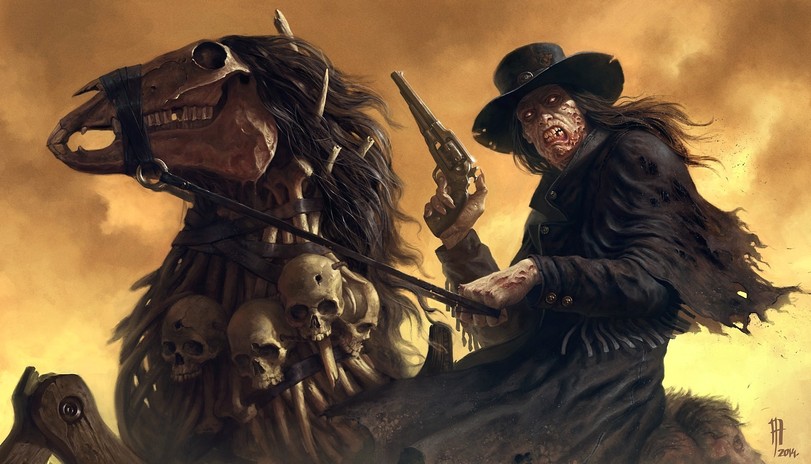 "Oh, for fuck's sake," he shouted as the little boy's cries rang out into the night, blending in with the soft howls of wind blowing through the forest. Despite sitting relatively still, their silhouettes danced upon the trunks of the trees surrounding the campfire.

"John, you can't be upset with him! He's just a child! He's not old enough for those type 'o stories and you know that!" shouted the young woman holdering her weeping child close to her as they sat upon a log.

"It wasn't even that scary," John grumbled at his wife. "And even if it were a little scary, that's not how you react," he stated sternly with an accusatory index finger pointed at his son. After a moment, he put his hand down and sunk back, a little defeated. "Kid, it was just tale. Skeletons don't really move, and they definitely don't use swords."

The child rubbed his eyes and slowly pulled his wet face out of his mother's shoulder long enough to glance across the way at the man who had delivered such fright unto him. The father could only sigh before scratching at his beard in a fit of anxious frustration.

"Look, that story wasn't real, but there really are scary things out there," said the man with controlled sincerity. "There are animals that want to eat you, people that want to rob you or worse, lightening could strike me dead right now! What matters is how you react when you have to deal with something scary. You can't just cry to your mama until she makes it feel better," he said with a mock whine in his voice. "You've got to stand there and stand tall and deal with that scary thing. Think about it reasonably, logically and tactically. And don't you ever flinch. Do we have ourselves an understandin'?"

The little boy was quiet, staring at his father blankly, a million emotions swimming around in his mind.

"I said, do we gave ourselves an understandin'? You deaf, boy? Answer me, Jack!"

"Just tell me what you want me to do!" The words escaped his mouth in a sharp panic to Jack's own surprise. The stakes were just as high as his blood pressure. He made a living by knowing what the next step was and knowing the next step after that and playing off of that knowledge to beat many a person our of their spending cash. But this situation was different. He didn't know the next step. He didn't know what was coming, which made it impossible to prepare, to be ready for the danger. Preparation helped mitigate fear, but Jack was a blind man in a strange land, figuratively speaking. He furrowed his brows to keep them from shaking, giving him the guise of a serious thinker. In reality, the familiar tingle was starting to crawl up his spine. He couldn't let it reach the top. If he gave in to the terror his imagination was creating, he would surely be a goner before too long.