STATUS: Back to stay. This is where I belong. 2 yrs ago 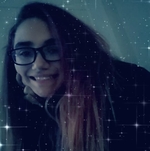 2 yrs ago
Current Back to stay. This is where I belong.
3 likes
2 yrs ago
I'm sorry for the long break I took. I lost motivation plus my gf at the time didn't like me roleplaying and was actually severely against it. I'm back now though!
1 like
3 yrs ago
Happy holidays
2 likes
3 yrs ago
Merry Christmas!
1 like
3 yrs ago
So I thought I said this before but apparently I didn't but I will be posting mostly on weekends.
1 like

Love long and live for the moment

I like writing, role-playing, reading,anime and acting. I plan to be in the video production field as my career and minoring in Psychology. I am currently 19 years old.

Sorry, life's been hitting hard. Literally have thrown up from anxiety and stress 8 times in the past two weeks.

Ummmm... Something like spiders would be good for her to be like fuck this shit, I want out. Other than that one of her biggest fears is the loss of consciousness and control. She's also a bit OCD about where stuff needs to be a lot of times.
In The Darkest Minds Never Fade in the Afterlight → 3 mos ago Forum: Casual Roleplay
Moving on time?
In Spliced → 3 mos ago Forum: Free Roleplay
@KatherinWinter

That step on the bus might have well been the end of it all.

That was the moment Harper realized they knew, that she had been careless, that she could no longer hide what she was and from other standpoints the scariest. Her eyes darted around to around the bus, as she was urged through the line to a seat. She didn't open her mouth to breathe, even though her lungs felt like they were about to implode.

The ride was a long one but she couldn't sleep, not that she tried. She stayed up, tapping her foot lightly on the ground, looking around with her red, puffy, tear-stained eyes. She saw some of the other kids were asleep, others were like her. She met eyes with some of those kids, but no one had anything that was more reassuring than the next. She knew they weren't going to die, but she also knew from what her father always told her- There are a lot of things worse than death, and she was about to find out.

She then felt the bus stop, the men with the guns stand up, almost too fast to process. Her first reaction is instead of looking down, is to take a look out the window. To see where they were going and she did, and what felt like seconds later they were all lined up off the bus into another building. The smell that filled her noise was enough to give her a headache alone if it wasn't for the fact she had already had one.

Like a crashing wave, she heard the kid say run, and instead, she froze. She felt the tears come through her eyes as she turned around to see what had happened and the large man in front of her giving the speech. She wiped off her tears furthermore feeling the burning in her throat.

Harper made her way to the room forcing her steps forward. She felt like she was going to collapse, nevermind has to deal with more. She looked at the girl in the room raising an eyebrow at her before laying down under the machine.

She closed her eyes and opened them and it was done. She was expecting something worse, a lot worst. She sat up, looking at the lady, before answering. "Harper, Harper Azalea Cartella"

She continued to answer the questions, not immediately but after a few seconds and briefly. She let the girl place handcuffs on her but panicked seeing the muzzle. She shook her head no, tears coming out her eyes. "No, no please-" and the rest was muffled away, and she was sent on her way.

She saw the kids poor in after her all placed into lines, all with a color marking them, and soon they made their way to the camp, and into the beds. A guy came and took her muzzle off and the handcuffs for the time being. Harper looked at Min-a and the other girls in the cabin before sitting on a bed somewhat in the corner and placing her heads into her knees.
In Spliced → 3 mos ago Forum: Free Roleplay
@KatherinWinter@Raptra

"Grand." Blair stepped into the maze willingly. Hopefully, they all got lost from each other, but she knew that wasn't possible. She could already smell their scent enough to trace it down the hall, and most likely steps through a maze. God being an animal and being with others really did suck when you wanted to spiral away from them.
In The Darkest Minds Never Fade in the Afterlight → 3 mos ago Forum: Casual Roleplay
Will post tomorrow guys! Sorry about that, got sick Friday to Saturday so was sleeping it off! And been busy at school.
In The Curse of Sonina → 4 mos ago Forum: Casual Roleplay
Luke Mayfield

Luke lifted his head with a light chilling laugh as he watched the two's response. "Oh hoy, glad we're on the same page. It's not like you would have said no." He said as he grabbed his spoon off of his tray, and began diving into his food like a man who has never ate before.

Luke half laughed at Felix's response of looking like he wanted to appeal people away from him. Finishing up on one of his bites he shrugged. "Feel like that's exactly the opposite vibe your giving out right now." He bit another piece of his food before hearing the other comment he had to say. He placed his finger up, his eyes wide. He even stopped chewing for a moment processing what Felix had said. Before not so long- he swallowed down the anchoring food in his mouth, looked directly at Felix.

The first few seconds, it felt like his mouth was dry like he couldn't speak. "Hold up- I'm not gay, and I better not be your type, because you know sure as hell I need a restraining order if I was." He felt the tension in the air that he created, and he knew it was there, but there wasn't a way he could let the school begin thinking he was gay, that would hurt his relationship with the sports guys and he wasn't for that. "I don't have any problem with you being whatever, but you can't go around saying whatever you please. People actually know me, ya know? But it's aight, I know you didn't mean it."