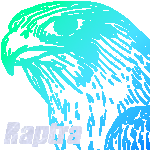 It was quite clear from Roxy's responses that she did not have a plan, and he would not have been surprised if she was internally freaking out about the entire situation. Either that or whatever life she had led up till now had caused her to always go numb as a response to being in fixes such as this one. Regardless, if there was a time to start panicking it would have probably been right there and then, but what good would that have done? He could only hope that they were both at least decent at winging it should the time come for them to do so.

"So what, you planning on robbing this place blind and booking it?"

He would not put that past her, considering everything else she seemed to be involved in. In which case, he would still be noted as a hostage instead of her accomplice, right? His sympathy for her aside, he was still with her mainly because it was his best chance of staying alive, after all.
In the alphabet game. lol → 19 days ago Forum: Spam Forum
Yodeling
© 2007-2017
BBCode Cheatsheet