STATUS: Kindly PM me your writing playlists, please 😌 Or any music good for productivity! 12 mos ago

12 mos ago
Current Kindly PM me your writing playlists, please 😌 Or any music good for productivity!
12 mos ago
Hi, I just want to wish everyone a positive day with lots of love and encouragement. ❤️
22 likes
2 yrs ago
Probably because the word “love” is one of the few words in English to describe deep affection and intimacy between romantic partners. Idk that’s just me tho :^)
2 likes
2 yrs ago
Alternatively: go by what people say they are (gender or sexual orientation) and respect that.
10 likes
2 yrs ago
Advanced RP? Nah, I require only Grandmaster Elite Challenger tier roleplays 😩👌🏼
8 likes

Hey, I'm Chai, like the tea. Welcome to my profile here on RPG.

If you're a GM or a fellow roleplayer that wants to vet me for your roleplay, all you need to know is this: I'm pretentious about my coffee and likely my roleplaying, too. All you're going to find in my post history are pretty things and probably some writing that I may or may not be proud of.

Also, I like being a saucy little shit. Lol.
If you want to chat, just hit me up with a PM to say hello!
x
x

think i might write up an app for this soon.

I don't think this is quite my cup of tea, but, I just wanted to stop in and let you know that your aesthetics are just so fucking good.

Thanks bby! <3
In The Island: A Murder Mystery | Currently Accepting 1-2 More Players! → 2 yrs ago Forum: Advanced Roleplay
Hooray! I've finally posted. Any IC posting right now will likely be small, idle chit chat between yourselves and the guests, so if you want to write those, go ahead. Feel free to ask me or each other for collabs; I know conversations are usually kept short, so I don't mind if these posts are quite short. And feel free to take creative ownership! If something wasn't explicitly stated in any of my posts, there's a 99% chance that you're free to cover it. 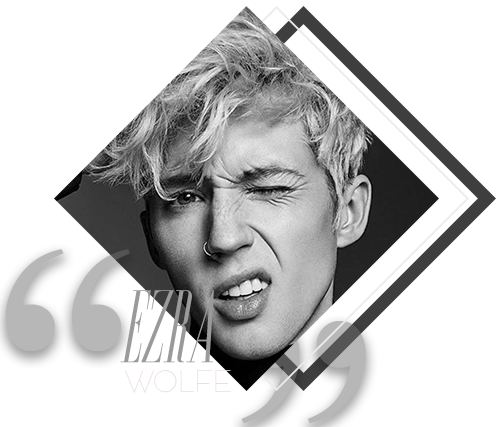 Post Title: True Colors__✿__Location: Wolfe Island - Great Room (Welcome Party)
Interaction: Everyone.
Playing dress-up had been one of Ezra's favorite things to do since he was a child. It had nothing to do with being gay but everything to do with expressing oneself, and in some cases, becoming someone else. But tonight, he was no one but himself. Ezra Wolfe in all his glory, taking the world by storm. Looking at himself in one of the mirrors on the first-floor hallway, he couldn't help but admire his own ingenuity at that night's outfit: a white Armani suit with a black-and-grey patterned waistcoat and matching white dress shoes. His bleach blonde hair was tousled like normal, but he managed to tame the curls enough so that they peeked just above his own mask. The mask was simple; porcelain white, just like his suit, and largely blank except for the addition of an extra set of eyes, a nose, and lips on either side of his own face. Every part of this designer costume was deliberate and carefully planned with purpose. He had never been the type to run from his sins, and this was his way of being unabashedly unapologetic about it. In fact, the mask itself was acknowledging his very nature, and he wore it with pride.

He lifted his Rolex watch, but he'd looked at it so much already that he knew what time it was. Fifteen minutes until 7:00 PM. On cue, a sweet piano melody filled the home, and out of his peripheral vision, he saw the guests begin to pour inside the house. He didn't know all of them, but he did know they were special and valuable resources for the six guests of the mansion. They'd need to step out of their comfort zone and interact with those around them, but whoever managed to do so would likely be a step ahead of the game. His game. Well, their game. His and Valentina's. And in this world, information was gold, the almost literal lifeline that could mean the difference between success and failure.

"Not there," he suddenly snapped at a worker who dropped an open chest of what appeared to be full of gold coins and human arms, the hands contorted in distorted positions as if reaching out in a cry of help. Both fake, of course. Or were they? It was hard to tell when the Wolfe's were this rich, and money could buy any quality. "Didn't I have specific instruction on the decor? Can you not read, or are you just fucking stupid?" Ezra continued, glaring daggers into him before it melted into something more of a scowl.

The worker stopped and picked the chest back up, muttering a quiet 'sorry' and staring at a distant spot above Ezra's shoulder. Unlike the quiet, calm aloofness of his older sister, Ezra wore his emotions on his sleeve—love was love, pain was pain, and anger was most definitely anger. And it was a scalding, vicious one at that. But even that meager apology seemed to placate him, and he offered a small smile with cold eyes. "Place it in the middle of the dessert tables," the younger Wolfe sibling finally said, "Like a centerpiece. It's lovely."

The worker nodded and walked away, lugging the chest back to the great room. Ezra watched him round the corner before checking his watch once more and finally making his way to the party. 7:10 PM. Fashionably late as always, but earlier than his sister. God only knew what she was up to.

It was there that he spotted the small crowd of his guests, one person missing, and he sauntered forward to greet them once more. His mask was covering his face, but the unmistakable tufts of blonde peeked above the porcelain "I see you're all here in one piece," he joked, though he wasn't quite sure they'd find it as funny as he did. "Not so bad, right? Fun party, fun decor, fun music..." The sounds of the gentle piano strings thrummed in the air, and he made a face behind the mask, his lips down turning for a brief moment before a wide grin returned. "Well, music gets better later on. After all the old bitches leave."

Ezra laughed and grabbed a champagne flute from the waiter standing nearby, downing the thing like it was water. And then a second one. "Don't let this expensive alcohol go to waste," he mock chided them, then sent the waiter on his way. "Anyway, please enjoy. Let your hair down, loosen the tie—but not really, since it's part of the dress code. Have some dinner and drinks. The foie gras is to die for, but so are the chicken tenders, if that's your thing." He nodded towards the buffet of food lined with kitchen staff that were also dressed in all black and wolf masks. "And feel free to talk with people. Anyone... everyone... you're all the guests of honor tonight. But if you'll excuse me..."