STATUS: Does anyone want to roleplay miraculous ladybug with me? 7 mos ago 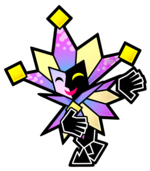 7 mos ago
Current Does anyone want to roleplay miraculous ladybug with me?

In House Of Villains: A Slice Of Life About Comically Self-Aware Villains → 4 mos ago Forum: Free Roleplay
Quotes:"I wouldn't get overconfident if I were you, the real battle hasn't even started yet. Heheheheheh."

Bio:zork is a member of a clan of planet conquering warlords that are also intelligent scientists that are descendants from an exiled criminal Alumni now known as sidious.

Personality:zork is an egotistical mad scientist who seeks to conquer the universe and has an obsessive all-consuming undying hatred of another oc of mine, he is also a childish spiteful jerk who is great at coming up with insults towards Anyone he meets and is willing to take down his opponents with him should the need arise.

Skills,
Scientific mind:can come up with all sorts of inventions to assist in his schemes.

General/admiral:zork is very capable of commanding fleets and armies in battle, although this is something he usually leaves to his underlings.

Escape artist:zork is also capable of escaping from any sort of prison and has actually escaped being dead a couple of times.

Psionics:can do telepathy and telekinesis and uses these powers in battle.

Weaknesses:
Hatred:his undying hatred of that other OC has led him to blunder and fail, something that he usually blames on his underlings.
Tin foil:can block his psychic powers
Ego:zork is very overconfident and has a tendency to overestimate himself.

In ArcRift → 7 mos ago Forum: Casual Roleplay
"oh right, that planet." Chini responded, before hearing her scouter beep, *what the? Several high power levels?" She asked herself in shock as Superman and the rest of you flew above the alleyway.

In ArcRift → 7 mos ago Forum: Casual Roleplay
"skullcrawlers? Klyntar? Harvey bullock? What's next? Ed edd and Eddy?" Frank muses as venom and the skullcrawlers begin to fight. "Or Godzilla." He finished

@limpkio @midle1998
In ArcRift → 7 mos ago Forum: Casual Roleplay
"ughhh, where am I?" Chini asked, it had been pretty simple what she was doing, and her minions were destroying a world to sell it to the highest bidder when she simply vegan to feel weird, but nothing she ate tasted funny. She was wearing armor similar to turles's and a green undershirt beneath it and a scouter on her face, beside her was a tiny Turquoise alien with hair up in a ponytail and pointy ears and she was wearing a burly robe with a white hood and a button under her cloak. Underneath her robe, she was dressed in a black cassock with a gold-colored castle emblem on a red background with a light blue line on the side of the background. Underneath the cassock, she was wearing black pants and blue shoes. "We might be on another earth." She said waking up and grabbing an pot containing the black water mist in it.
In ArcRift → 7 mos ago Forum: Casual Roleplay
Meanwhile, in another alleyway in metropolis, two women from another world suddenly appeared, unconscious though they were.
In ArcRift → 7 mos ago Forum: Casual Roleplay
Name:chini
Fandom: dragon ball z
Age:27
Abilities
Skills:ki manipulation
Flight – The ability to fly with the use of ki.

Ki Blast – The most basic form of energy attack.

Death Beam – To perform the technique, the user extends their right arm and fires a small, thin, very fast and concentrated laser-like beam of ki from his index finger, which barrels down and pierces through the opponent. The user is able to fire the attack very quickly, while maintaining precise aim.

Eye Laser – The user shoots laser-like beams from both eyes. The potency of the Eye Laser technique varies, but most of them are very fast and able to nullify weak attacks and small projectiles, as well as cripple opponents and damage other objects.

Kill driver:chini forms a ring of energy with electricity sparking around it between her palms and throws it at her target.

Appearance:Garlic Jr but with girl hair

Flight – The ability to fly with the use of ki.

Ki Blast – The most basic form of energy attack.

Telepathy – the ability to talk to people with your mind.

Manipulation Sorcery – A spell which clover Jr can cast over any being in an effort to take control of their mind and dominate their will. This spell is only known to work successfully on targets with evil in their hearts.

Sealed Light Beam – First, she puts her hands in front of her, and then She fires rings of energy that paralyze and shrink the opponent.

Continuous Energy Bullets – A combination of many energy waves, much more powerful than the average ki blasts, and fired at a very rapid rate.

Death Impact – A Full Power Energy Wave shot from the hand. In her transformed state, clover Jr. can also fire it from her belly.

Finger Beam – The user holds out their index finger and releases an energy beam from their fingertip.

Full Power Energy Ball –clover Jr. launches an energy ball from each hand, before firing a third powerful ball from both hands. .

Biography:Is the daughter and reincarnation of clover Sr who wants revenge for her father's defeat and to conquer the entire universe, and she's universe 6 garlic Jr."