In Supernatural - Hell On The Horizon → 14 days ago Forum: Casual Roleplay
Maybe write me off without killing me. That way I can return if things change.
In Supernatural - Hell On The Horizon → 15 days ago Forum: Casual Roleplay
Many demons were attempting to swarm into the center of the house. In this place, Benjamin was invisible to the demons, thanks to his putsie bag. As they were shooting their weapon's fire into the room, all shots would miss, piercing through the walls and generally messing up the property quite a bit. They weren't prepared for Benjamin being there to defend the others. He would telekinetically mangle them through crushing their skulls, and breaking necks telekinetically. However, the more demon vessels that Benjamin destroyed through his magical powers, the more they would replace the fallen. Eventually, the house was over flowing with dead, and Benjamin would magically conjure an incinerating stream of fire that would not harm Mister Singer's house at all, despite the demon bodies getting annihilated.

However, the stream of demons came at Benjamin, almost like a line of ants. Getting frustrated with having to kill so many enemies, in just two seconds, Benjamin expanded his forcefield to the size of a large wall, he manipulated his mind energy into a hyper speeding full on slam, hitting these demonic vessels hard enough to render them into fine paste.

He turned his head, noticing that Bobby and Natalia were furiously attempting to defend themselves against mid ranking demons. With several gestures, Benjamin was speaking an incantation with his mouth, lasting several seconds, and conjured a lightning bolt to strike one of the demonic foes from behind.
In Supernatural - Hell On The Horizon → 15 days ago Forum: Casual Roleplay
Benjamin
-WIP-
In Supernatural - Hell On The Horizon → 19 days ago Forum: Casual Roleplay
Knocking on the door, the witch noticed that he could sense the presence of someone very experienced and skilled as a hunter. Benjamin politely gave just three more raps on the door and would wait for Bobby to answer. "I'm a friend of the Winchesters." He stated. "Name's Benjamin, I fell asleep in the car."
"Sorry!" He stated, as he was embarrassed. Sioux Falls was beautiful this time of year, he thought to himself. 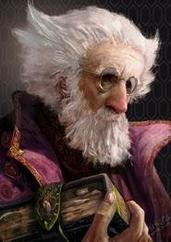 Appearance: Merlin appears as an old man in his 70's. This man isn't in a robe most of the time thanks to modern fashion, and he is often dressed in formal wear, carrying a magical cane. His hair is somewhat pointed on both sides, like a little less exaggerated version of Dracula's hair in the movie Bram Stoker's Dracula. He is slender, but also not tall at all, standing at five foot eight. His eyes are hazel.

Agent of the OMR(yes/no), No, but he is losely affiliated.:

Biography: Merlin was born in the year 330 somewhere in the British Isles during the Dark Ages, as the biological son of The Devil. Merlin lived in fear for his life during child hood from people trying to make use of his magical powers. He would flee to different areas of the British Islands such as Cornwall, Scotland, Wales, sometimes even Ireland and finally Camelot, in what is now modern England. As the son of Satan, Merlin's power was tremendous, but he decided not to use his magic for evil deeds, and even turned Satan down on being The Antichrist out of his own free will.

Merlin helped King Arthur of Camelot defend his country and the surrounding country side of Britain from supernatural threats. With Merlin's help, Arthur's Kingdom was somewhat exponentially more powerful than it should have been. Finally, at the age of around one hundred, Merlin was trapped by the mages Morgana Le Fay and Mordred in a magical cave, tree and castle in the air all at once through Morgana's diabolical plan to keep him from saving Arthur's life at his final battle. Merlin was supposed to awaken with Arthur near the End of Days to protect Britain. Someone or something has freed Merlin from his imprisonment in three magical dimensions at once in the Renaissance Era, and not even he knows why.

For hundreds of years he has gone by many an alias, often living as a man well looked after by European Monarchs, finally leaving his many homes in The Old World to live in America during the 19th century. Merlin came to America hiding from a mysterious presence he felt was even dramatically more powerful than himself. Merlin lived in America from the year 1830 until the year 1981, when he returned to England, researching ways to stop The Abomination along with the rest of the magical community. Finally, in 1989, Merlin fought with many other gods, wizards, and supernatural beings against The Abomination and had many victories against eldritch beings, but was taken out of commission after many battles began to take their toll on him.

In 1995, Merlin is now in Germany, living as a respected veteran, occasionally giving aid to one of the most active forces against The Abomination in all the world, known as the OMR.

Reason for being chosen for the mission: Merlin is tremendously powerful and knowledgeable in the supernatural.

All weapons and equipment must be registered: Since he's been in the modern era for twelve years now, he uses guns.

Skills And Natural Abilities:
Merlin is cosmically intelligent, which means his intelligence level is a super power on it's own.

He is as strong as an Olympic athlete in their prime, despite appearing as an old man.

This old man is very diligent and hard working, studying knowledge very day until he has a thorough mastery over what he has learned. Because of this he has a mastery over many fields of study such as chemistry, mathematics, philosophy, history, ethics, and physics.

Magical Abilities:
Remote Viewing, which is a form clairvoyance which allows Merlin to see and hear events and/or locations which are away from his current location.
Necromancy, the ability to speak with the dead.
Healing, Magical healing to spontaneously close wounds and restore the body from harm.
Shapeshifting, Merlin can shapeshift into any Humanoid form, or natural animal form.
Enhanced Senses, Merlin has the power to sense any evil of demonic nature.
Elemental Dominance (Control over the elements), Fire, Ice, Lightning, Wind, and Earth manipulation. He can control these things with ease.
Curses, Merlin can curse others with temporary inconveniences.
Illusions, This man can create very real seeming illusions, sounds, smells, feelings and visually real things or events could be actually just an illusion.
Telekinesis, Through controlling friction with his mind, Merlin can do many things, possibly even create forcefields..
Supernatural Durability/Longevity Based Immortality, Merlin looks like an old man but that's by choice. He can look like a twenty year old man again if he wants.
Magic Resistance, Merlin is naturally very tough against magic, but not immunity.
Due to the fact he's on God's side, excorcisms and the like don't effect him like they usually would a demon.

Miscellaneous Facts:Merlin is not particularly religious but he is Christian and at least kind of devout towards God despite being the son of Satan. He is also a literal genius.

Likes and Dislikes:
History, since he was born during the literal Dark Ages, he can tell people what life was like back then.
He dislikes betrayal, for obvious reasons, he not only hates it in general, but was betrayed by his lover and friend Morgana and Mordred.

Personality:
Merlin is somewhat like he is depicted in media and literature. He is a wise old man who is also very very intelligent. This man can be insightful and prudent, based on his life experiences, and has learned from his failures in Camelot. Beyond that, he also is a polite individual who likes to make friends.

One thing he cannot stand is betrayal. Not only is it just wrong to begin with but Camelot was brought to the ground because of it. A distant second is falsehood, aka lies. He can show a little lee way for lies from time to time, but on the whole, he has trouble respecting pathological liars.

Sexual Preference:Heterosexual
In The Hunt, A Modern Fantasy Smorgasbord RP → 28 days ago Forum: Casual Roleplay
Where's the Discord? :D
In Reincarnation Wars: I Am The Many (Still Recruiting, Crossover) → 29 days ago Forum: Casual Roleplay
*bump
In Supernatural - Hell On The Horizon → 29 days ago Forum: Casual Roleplay
Benjamin
Benjamin walks without being escorted to the table inside the room, seeing the team all together eating their breakfast in this place. "Hey guys, I've got some bad news. I've been far seeing with my magic and I'm sure that someone is tailing us. This force is not Samael or anyone we've ever met before, and I think it's stronger than me."
"Either another witch is spying on us or it's something that I've never ran into before. It isn't demonic or angelic."
"I'm a little worried that it can over take us easily. We have to somehow get ready for it but I'm not sure how." He looked around at the indoor room. "You know for a three star hotel this place is a little fancy, isn't it?"
© 2007-2017
BBCode Cheatsheet