The angel of fortune

STATUS: My great grandmother has died as of today. I'm going to go and see her, forgive my abruptness in going silent on you all 3 yrs ago 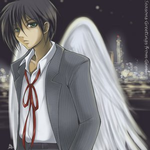 3 yrs ago
Current My great grandmother has died as of today. I'm going to go and see her, forgive my abruptness in going silent on you all
16 likes
4 yrs ago
warning: my Wi-Fi may go out soon if it happens I won't be able to post. To all those I rp with I ask four patience until Friday
4 yrs ago
All those I rp with, I am in the direction of hurricane Irma, I won't be active for a while. Wish me luck and safety during thus hurricane season
1 like
4 yrs ago
Just fyi to all my rp partners, I'm hitting the final leg in my summer classes. I'll be busy so I'll post when I can
4 yrs ago
If someone needs a few evolution trees for a RE: monster rp then just look in my album for some I created with a friend

hey its jangel13 here, been here a while and I do allot of rp types but I like to join those that have developing powers and character depth. I'm an idea guy and can come up with ant great rp idea with only a little bit of effort but putting it to work in practice is where I have trouble so I usually have a Co gm to help with that. If you remember nothing else about me then remember this: jangel13 never gives up an rp once he starts! I am loyal to the rp and never give up unless the GM does first!

In Love between the eras (M looking for F, always open) → 1 mo ago Forum: 1x1 Interest Checks
Recently I had gotten into binge watching a few anime and yashahime was one of them. I am going to be honest it isn't as good as the original but then again sequels rarely are. However it did remind me what was so good about Inuyasha in the first place, romance and fantasy battles gotta love the combination along with the mystical and excitement of slaying ancient demons to save the world. The characters constantly improving through every hardship until the final scene which I wont talk about for obvious reasons. Still it made me want to try and make an rp here. I haven't been active here lately and that's mainly because their aren't a lot of people to rp with at least from my experience their isn't. I was hoping that we could make an rp based around Inuyasha but keep in mind I only do OC I don't like having my behavior dictated by the character that is already made.

So here's the long and short of it. I am looking for someone to join me in making a 1X1 Inuyasha rp. We would be two creatures seperated by the modern and feudal eras but were inexplicably brought together by fate to save the world through our trials and tribulations romance would form and things get interesting from there.

Now if your interested in making our own adventure then here are my only rules:
Must be over 18
Must provide at least a paragraph of writing, quantity isn't as important as quality.
Must be okay with romantic and sensual scenes
Talk to me, if you don't like something let me know and we can work it out.
Have fun :)

If interested please PM me and I will talk with you about what we want our adventure to be. Their would be a bit of world building if only to set our goal for our characters to achieve but that's the extent. WE figure out how to bring our characters together and we figure it out from there.
In The 6 pillars → 1 mo ago Forum: Casual Interest Checks
Kinda like I said I never played league, just super strong players now turned "NPCs" trying to figure a way out before they lose
In The 6 pillars → 1 mo ago Forum: Casual Interest Checks
This was just meant to be another normal day, you got off work or school and you would play your favorite game. The year is 20XX and VR games have advanced significantly. Not only are you able to fully dive into a game but you can feel everything that happens as if it were real. Not a lot of people play the games for realism but because they can fully immerse themselves in a new world. This game even has a part in E sports where competitions around the world are televised. However instead of it being PVP like most E sports. It focuses on PVE, players create characters and work together to defeat Legendary NPC hero's which stats are so high that simply getting to them is a challenge and half of the entertainment value. Even getting to a certain point in this final raid nets the players respect and money. The raid is so difficult to win that only 2 parties have ever done it in the past 7 years since the games inception.

You are just normal people, you could have been E sports players getting ready for the next competition or you could just be an average joe that likes to play this game for fun. However as you dive in to play you realize you aren't in your normal character bodies in fact you are one of the 6 Pillars, the name of the legendary hero's that are the goal for every player. However it soon becomes apparent that you the pillars are the true hero's and the player characters are actually the villain's. Whenever the raid is finished it resets the world, killing you and everyone in that world if the player character ever win they can choose which legendary hero they want changed, if they pick you then you are subjected to unimaginable pain as your code, your very souls are destroyed and whatever you used to be ceases to exist. You all die but whomever is chosen is given a fate worse then death.

Now that you are the legendary pillars you can't escape and you can't leave. Will you fight till the bitter end? Will you let yourselves be erased or get your code reworked until you are no longer you? Or will you try and figure out a way to beat the game as the pillars and instead reveal to the world how bad the game truly is?

Okay so I drew inspiration from a music video called warriors from league of legends. No I have never played the game myself and I don't plan to, I also didn't base this on them but the video game me the inspiration for this. Basically you become legendary hero's within the game and can't leave. If you give up, you die. If you fight then it's an endless fight until you figure out how to stop the players from coming into the world or you figure out a way to get out to tell the world what you went through. I am basically letting you guys become OP characters in a video game. The abilities you have can't be game breaking! so no time distortions or something ridiculous like that if you were that powerful the game would crash every 10 seconds and it wouldn't have become a hit in the first place. Right now this is just an idea i had so im unsure if it will gain any attention but at least i got it down in case someone likes the premise
In From goblins to godhood (re:monster rp) → 4 mos ago Forum: Casual Roleplay
Sigh* well attempt number 3
In From goblins to godhood (re:monster rp) → 4 mos ago Forum: Casual Roleplay
@Darked13@Eviledd1984@Haeo@demonspade64@Crusader Lord@ReusableSword@Guy0fV4lor@Duthguy@Dark Cloud