STATUS: Oh boy we back at it again. 3 mos ago 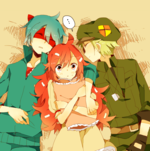 3 mos ago
Current Oh boy we back at it again.
2 likes
3 yrs ago
Debating my revival on RPG. After having abandonned (not by choice) the single RP I was trying to catch up with last time... Not liking my chances, but still intrigued.
4 yrs ago
Happy Birthday to me~ Happy Birthday to me~
7 likes
4 yrs ago
So this is what it's like to feel like an asshole... This sucks.
3 likes
4 yrs ago
After three months of being dead in a ditch, I'm finally back! Hurray! :D
3 likes

With the sounds of turbulence and shifting cargo in the background, Pavan mostly kept to herself as she clutched the stuffed duffel bag in her lap, eyes closed as she attempted to enjoy the bumpy ride. The young woman wasn't quite used to air travel, her pervious excursions usually by land or sea vehicles, and to be frank she felt sort of lightheaded just imagining just how far everyone in the plane would fall if something went amiss.

Was she afraid of flight? Possibly, as she never had this sort of problem when traversing rough seas or hectic firefights in a humvee. Maybe it was because it was her first time in a cargo plane, and the massive stack of crates just barely kept together that could potentially become ajar and tumble onto the potential operator gave her a bit of anxiety. Or, just maybe, she didn't feel very comfortable in the silence that seemed to cover her eight potential co-workers, their professional airs keeping her from interacting freely.

Thankfully for the Sankta, however, someone eventually made the ball start to roll. A Kuranta, she introduced herself as Chariot, who got every other operator in the cargo hold to follow suit. Wonderful, something to start a conversation with. Pavan waited until everyone else had introduced themselves, muttering their names under her breath to make sure she wouldn't forget them, before eventually adjusting her mic so it could catch her words clearly.

"Callsign Pavan, freelance worker, one year of experience," she began, her perky voice giving her curt introduction a strange tone. "I specialize in demolition, breaching, and aiding the removal of heavily armored threats. I'll be happy to work with you all if we all get to work together!"

With her opening statement finished, she rounded her attention directly toward the young woman who called herself 'Feral'. The white-haired rookie seemed to be the closest to her in age, and the Sankta couldn't help but be a bit interested in the seemingly standoff-ish operator.

"So, your first year? How has it been so far... Feral, right? I remember not doing so hot when I started, but I hope you've had more success than me!"
In Arknights - Project Neptune → 3 mos ago Forum: Casual Roleplay

I mean yeah. You're literally looking for furries, aren't you? Even Elza from Interspecies Reviewers is a bit sketch for the purposes of being a mercenary.

It was the everything worse, and the fact that the Elza-tier stuff was few and far between and there was literally like a handful of stuff that I could find that was wholesome or fully clothed was one hell of an issue.

I imagine it must be rather difficult without stumbling across a whole bunch of questionable images.

It was exactly the case...

I cannot unsee what I have seen...
In Arknights - Project Neptune → 3 mos ago Forum: Casual Roleplay

“As for my capabilities…my Arts will take care of the drones and Big Bobs we come across, so long as you keep me covered, Mule.”

Huh. Didn't know there was more than one Big Bob. He must have lots of disposable brothers.

Also I bailed from doing the hyena cause I couldn't keep looking for potential art.
In Arknights - Project Neptune → 3 mos ago Forum: Casual Roleplay

Fun fact Hyenas are more closely related to cats than to dogs.

This fact does not change the fact that Spot is, in fact, the cutest thing on this side of the universe

Also is it fine for the race change or am I not allowed to change the character since we've already closed applications?
In Arknights - Project Neptune → 3 mos ago Forum: Casual Roleplay

Spot is a strong, independent Hyaenidae and I'll not stand for you misrepresenting him. 😤

Be the change you want to see.

I actually might have apped one if I knew we were gonna have another Sankta. If @Asuras allows Ill just change some personality stuff and a different race for my character so that they’re a doggo like Spots. Diverse character rosters are cool.

If no that’s fine I can live with there being two angels
In Arknights - Project Neptune → 3 mos ago Forum: Casual Roleplay
Woo hoo IC Incoming!

That said, the only sad thing about our line up currently is that we don’t have any truly inhuman characters like 12F or Hunter
In Arknights - Project Neptune → 3 mos ago Forum: Casual Roleplay
A Caster, Guard, Vanguard, Supporter, and two Defenders