bitch you almost got blood on my timbs

STATUS: At the end of the day, God is everyone's bull. 14 hrs ago 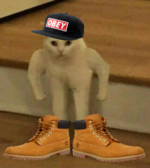 VAGRANT
Those who lug around massive, bladed weapons such as axes, greatswords, and scythes. They rely on overwhelming their opponents with powerful, animalistic blows that border on inhuman. There have been many stories of such individuals forging covenants with strange shades.

It took a level of willpower to suppress the eye roll that rightfully should've followed the boy's comments, as if he hadn't just been shuffling around through the crowd, aimless as anybody else, hoping the flow would bring him to where he needed to be. She couldn't exactly fault him for expressing interest in her company, though, nor for the devil's grin that followed it. If there was one thing Kemurikage Akemi was, it was a beam of light, sent down from the heavens above to brighten the days of those lucky enough to witness her radiance. He just happened to be the most recent in a long line of beneficiaries of such a luminous blessing.

That, or high school boys couldn't help but puff up like roosters when they perceived a compliment from the fairer sex. Either or, really.

"What gave it away? My youthful glow?" She asked, gesturing vaguely to herself as if she hadn't slept for all of four hours and spent the rest of the morning wallowing and chain smoking like some kind of burnout, "Class 1-A. Suppose that means I'll have to sit up in the front..."

She deigned to follow along with her ostensible classmate, figuring that a second or third year probably would've already found where they needed to be. Her pale blues scanned the crowds with a vague disinterest, if only to pass the moments between words, her mind lazily shifting through potential bits of small talk to offer up. Eventually, she settled on the basics, magnanimous enough to tilt her head to the side and address him more directly while they walked.

It only took a few hulking slides across the courtyard for Murasame to realize the error of his ways—he had undoubtedly ensured that nobody on the eastern side of the courtyard could possibly have seen his companion. On the other hand, everyone on the eastern side of the courtyard couldn't help but have seen him. He had been terrified all morning of exactly that! All the eyes, all the quizzical looks! The urge to just break formation and book it into the school in shame was incredibly strong. But he had made a commitment. He couldn't back out of something he had promised to do. So agonizing step by agonizing step he did his duty, until they reached the entrance to the main hall of the school and the blonde's voice stirred him from his mortified stupor.

At least Saika had managed to have fun with it. Feeling the smallest he had since arriving in Hokkaido, Murasame could only offer an embarrassed mutter as he shuffled through the entrance behind her, careful to duck his head as to not end up with a bruised nose on top of his bruised self-esteem.

"I don't even know what I'd want in return," He managed once they were inside and proper conversation could carry on, "'Side from never havin' to do that again. You seen many dancin' shark people? 'Cause I don't think anybody forgets seein' a dancin' shark person..."

The flow of students at least saved him from having to root around his bag for the on-boarding pamphlet. The auditorium was the only place students had any business being that early in the morning on the first day, so he nodded his head in agreement with Saika.

"I sure hope the rooms ain't small. I remember goin' skiin' with my folks when I was, err, smaller," He admitted sheepishly, "I couldn't fit on any of the hotel beds, so they had to smoosh two of 'em together, else my legs woulda been danglin' all night."

He didn't even want to think about the logistics of trying to do his business in a tiny little squat toilet. So instead of letting his mind run wild with that, he began to trundle his way towards the auditorium, figuring Saika would come along with him and keep him occupied during the trek. One such advantage of having such a chatty classmate.
In You Can Become a Hero! → 1 mo ago Forum: Casual Roleplay
MIZUSHIMA MURASAME
水島 村鮫
Location — Ishin Academy
Interacting — @Mcmolly

The trek into Ishin wasn't as nerve-racking as initially expected. Maybe it was the company, or the fact he had eaten a couple meals worth of WcDenji's on the way, but when he had left the station, Murasame had expected to near enough keel over at the thought of marching through such a crowded venue. There were students everywhere, from all manner of backgrounds and years, with all sorts of Quirks. Mercifully enough, it seemed most of them were either too busy with trying to find their way, or catching up with old friends, to bother paying him too much mind. That was probably the real reason it was so much easier—in his mind, he had imagined every pair of eyes in the school to have followed him all the way to the auditorium and beyond.

The hulking teen found himself brought back to reality by the sound of Saika's trash piling into a nearby waste bin. That presented a problem. He had only managed to eat about half his order in the time it took them to arrive, on account of his nerves. He still had a ton of food left, including a the fabled WcNib! Eyes darting to-and-fro in search of an answer, he found one only when he spotted a nearby student hiking a massive backpack up the school's stairs. Of course! The students would undoubtedly be expected to have lunch later! He would just save it in his luggage! As he hurriedly made room in his suitcase for the grease stained paper in his palm, he only vaguely caught what his companion had been saying.

"I, uh, yeah. I think this place is uh, pretty big on the whole patriotism thing... Honestly kinda surprised the uniform didn't come with a hat an' cape."

As he slung his bag back over his shoulder, he found the girl had gone missing from her previous position. It took him a few turns of the head before her voice clued him in to where she had gone, and he furrowed his brow quizzically at her request.

"I uh, I guess I could, but are you sure she wouldn't just prefer you fessin' up? Especially if you got her food. WcDenji's isn't very good when it's cold..."

There were many other questions to be asked. The usage of 'sprayed' not least of them. But, he didn't want to cause a fuss. He had only just met Saika, and she had been nice to him, so he didn't want to risk getting her into hot water with her friend if he could help it. Of course, her idea of helping it involved using him like a makeshift barricade. With a resigned grumble, he accepted his fate, and straightened out his back so that he might better display his full height.

"Just try an' keep up with my pace, okay? I ain't gonna be able to see ya while I'm going."

Turning so that his back was to Saika and his front towards the group she had so gingerly attempted to hide from, he puffed out his chest good and broad, his width more than enough to totally eclipse his more averagely proportioned classmate. Then he began. One step to the side. Slide all the way over. Return to full standing height. Repeated. Step by step, he would get Saika into that auditorium unseen, or his name wasn't Mizushima Murasame.
In You Can Become a Hero! → 1 mo ago Forum: Casual Roleplay
KEMURIKAGE AKEMI
煙影 明美
Location — Ishin Academy Gates
Interacting — @Yankee

The purple haired girl who had interrupted her morning ritual disappeared just as quickly as she had arrived, leaving Akemi to continue to drown her woes in puff after puff of nicotine infused carbon. Or, what little happened to remain of it. She had done well in achieving her initial goal—she had emptied her pack, and the embers had burned away most of the final remaining cigarette between her lips. It would only be a few more drags before it was all filter, and she would have no further excuse to avoid wandering into the assembly hall to await the dreary finality of her fate. Part of her, a large part, wanted to try and stretch out those final few draws, so that she might continue to gaze vacantly at the sky and enjoy the chilly morning. But that wouldn't help any. She'd just end up with a worse seat for the assembly, and she had a feeling it was going to be a long, boring one at that.

So she inhaled, deep and long, letting the air fan the flames ever greater, until there was little left but a stub. As she held it, she crushed the tip of her final reprieve against her shoe, and tossed it into the makeshift ashtray with the others. A flick of her wrist sent the cloud drifting across the way, and once it arrived at the ramen-filled trash can it finally found release, dispersing into ephemeral wisps that left the butts to fall down, out of sight and out of mind. She exhaled a similarly short lived stream of puffy white smoke as she walked away, hands tucked into her pockets and feet aiming for the front gate.

Most of the students she had spied during her little smoke break had disappeared, the stream of students beginning to slow to a trickle as the time for their reckoning inevitably approached. That wasn't to say everybody had gone, though. There were a few stragglers, herself among them, loitering about without anyone to keep them company. By chance, one of them happened to be right in her route, and so she decided to give a go at a little socialization.

"What's the matter, handsome? You lookin' for directions?" She asked on her approach, a tired little grin tugging on the corner of her mouth as she did, "I'm not the best at givin' them, but I think I can manage to show you the way. If you ask nice."
© 2007-2017
BBCode Cheatsheet