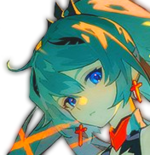 @VitaVitaAR
Enough did, but to be a noble was to bear scorn without complaint. Only tyrants drew their blade at every petty insult, after all, and if one remained in good standing with Royalty and Divinity, one ought to hold their head up high. Detractors lurked in every corner, and even as Serenity guided Veilena to the edge of the dance floor, she could hear their scattered whispers.

The traitor's spawn, convening with the scion of the Arcedeen. No doubt to plant seeds of betrayal into the mind of one of the most militarily-powerful families in Thaln. No doubt to prepare for the second war to be ignited by the raising of the Red Flag.

Nobility, indeed, was a quality. One honed through experience and discipline. Only fools who wished to fuck their sisters believed that it was blood that made a noble soul.

As one song ebbed away, as couples exited and entered the dance floor, Serenity drew in a breath and with it, drew in herself. A back, perfectly straightened. Hands, resting firmly in her partner's. Stomach tucked in, blood pumping to measured beats. And, finally, she inclined her head, flaxen strands spilling like rays of sunlight, beams of moonlight. There was nothing but confidence and enjoyment, an appreciation for her dance partner that was so perfect, so practiced, that it may truly have been genuine.

"Well, shall we give them something to watch, my lady?"

With the thrumming of strings, the whispers of wind, the echoes of percussion, Serenity took one step forward and advanced, entering a quick sequence of waltz spins as the two of them cut diagonally across the diameter of the space. Fast enough to cut between other dancers. Fast enough to befuddle the gaze of spiteful onlookers. Fast enough to meet the scherzo of the viol!

A dynamic entrance indeed, before knight and mage, scion and heiress, Serenity and Veilena, stopped in timing with the musician who they matched, their movements naturally leading to a pose natural and noble.

The opening act concluded and with its end began the beauty of 3/4 time.
In Blades of Iron Roses: An Anime-Inspired Knight RP → 7 days ago Forum: Casual Roleplay

@VitaVitaAR
“The night has yet to descend,” Serenity replied, gazing out reddening skies. “And none have imbibed so deeply of the libations available that they’ve the gall yet to approach while your charge is present.”

Regardless of what any lesser nobles thought, after all, the very fact that a member of the royal family extended an invitation towards Veilena meant that they approved of her continued presence in society, whether on the swiftness of her actions in her childhood or on the accomplishments made in her adolescence. And if one had the foolhardiness to do so regardless, they would find themselves with no place soon enough. After all, the Crown Knights would not suffer an insult to their charge’s extended hospitality, and the Iron Rose would not allow a time for such celebrations to be besmirched with denigrations.

“Admirable though the sunset may be, Reon’s fall and Mayon’s rise is a ritual uninterrupted by the comings and goings of mankind. This occasion, however, is a rare relief from training grounds and libraries.” Serenity smiled, sweeping one foot behind the other as she extended a callused, ornamented hand out towards the young prodigy. “Before disparate duties and desires see us scatter once more, would you favor me with a dance, Lady Cazt, if only until the Princess arrives? No matter what beliefs our fellow guests hold, the music this evening does not fail to inspire a desire for merriment in my heart.”

Her eyes glanced over towards the black knight, performative mischief flickering at their unreadable mien.

“Or should I have presented a partner for your knight as well, so they may subtly shadow us on the ballroom floor?”
In Blades of Iron Roses: An Anime-Inspired Knight RP → 10 days ago Forum: Casual Roleplay

@VitaVitaAR
On a battlefield, it was courage and a steadfast advance that defined a knight, unbowed as they were by adversity and multiplicity.

In a ballroom though, surrounded by those of high society, their armaments removed and their status as protectors of the realm granted to Royal Guards instead? A knight remained as such, but required too the finesse and grace of a noble, whilst remaining unashamed of the badges of honor earned, the body they had forged in flame, against anvil.

What else could Dame Serenity of House Arcedeen be expected to arrive in then, if not in her finest dress? Indigo fabrics hugged her frames, layered upon each other like ocean waves, flowing upwards to wrap around her neck. For the occasion, she had allowed her hair to flow loosely, draping over her shoulders whilst adorning herself with a few tasteful accessories that complemented her eyes. A few accessories to complement the scars that marked her body, to juxtapose with the broadness of her shoulders, the flatness of her bosom. It was a time to enjoy herself, after all. To see who remained in the third princess's favor, and who invited themselves in whilst disregarding such favors. Lein certainly seemed to be enjoying himself, the Hundi archer wearing his dress splendidly. She had not marked him the type to have such predilections, but if that was what he enjoyed, then so be it.

Gerard too, seemed to already be doing her proud. Serenity was right, as always. A bathing, a set of fine-enough clothing, and a couple pointers on posture and etiquette, and just like that, the handsome mercenary had earned himself more attention from the ladies that Dame Cecilia, and he had done so without even trying! Though, of course, those three ladies were still but children, and perhaps the flame-haired Sir Sergio had something to say about that as well.

Regardless, it was better than whatever Sir Fleuri and Sir Renar found themselves in, the latter having the absolute pleasure of catching the attention of the Crown Knight. The half-brother one. Serenity's smile remained, fixed like glass, and then, briskly, she turned away from whatever that scene was going to cause. As fascinating as the drama between the legitimate and illegitimate may be, there was no merit to be derived from watching two grown men trade snide remarks or step on each others' toes. If they were going to fight, she hoped they did so outside and put on a proper show for the guests.

Instead, she settled her gaze on the one space of silence in the ballroom. A space occupied by a black knight and his petite charge. A duo iconic enough now, to make them unmistakable no matter the distance. Veilena Cazt, the traitor's spawn. Eyes that glittered with the gold of prodigious intelligence. Hair that belonged on the head of a woman thrice her age. A child that either possessed an inner steel even at the age of eight, or could act the part at the behest of an experienced advisor. It was a shame, then, that such merciless decisions only made her more of a figure of suspicion amongst the upper caste.

After all, most nobles weren't fools enough to believe that a child could understand the gravity of treason, sheltered as she was from the worst of the rebellion. There were wives amongst the traitor-nobles who acted less severely than she did. To do so then, at the age she had been...t'was uncanny. Intentions, however noble, were subject still to interpretation. And association, too? A poisonous thing indeed.

That did not, however, stop Serenity's advance. Whether as a Knight or as a Scion.

"Good evening, Lady Veilena Cazt," the flaxen-haired knight spoke, favoring the younger lady with a slight smile. "Have you tired of this occasion already? Or is Her Royal Highness, Princess Elisandre Tanetha Falisse, the only one to have drawn your presence tonight?"
In Decibitus → 13 days ago Forum: Casual Roleplay
@King Cosmos

Unfortunately, doing that is basically grounds for instantaneous unmaking, owing to the whole Decibitus-After shenanigans. Papi can probably offer you alternatives though.

Simplest way of doing it would be to just have magical summons in the shape of animals, without actually doing the whole 'soul-binding' thing. That's basically in line with what Ed does, where his undead are just magically-animated bones, rather than living souls jammed into a new vessel or spirits bound to his will.
In Decibitus → 16 days ago Forum: Casual Roleplay
@Dragonfly 9
Eyo, art's in the eye of the beholder and all, but in this case, it would be good if you got a higher quality piece to represent your character, just so it's visually in line with everyone else. If you don't want to do that though, toss up a textual description of your character. Two-three paragraphs should do it. Right now, a camera shot of a small black-and-white picture doesn't really help in understanding what Zack looks like.

With regards to the in-character response that Papi asked for in the Character Sheet, its function is ultimately to serve as a good sample of writing ability, rather than just dialogue. As such, it would be best if you added in prose between your dialogue, if you wanted to stick with the interviewing thing you have here, or just flatout wrote Zack at his moment of death.

We'll leave the magic stuff after you settle your character stuff.
In Decibitus → 18 days ago Forum: Casual Roleplay
Will be rolling things out gradually, but...

A smile graced her lips as Serenity's eyes lead to Gerard's dirt-stained boots. Worn and scuffed up, even more so than before, and in truth, the rest of his attire managed to be in even worse shape, the tears in the seams along the joints making him appear quite...unseemly.

"Your steed will thank you for the early retirement. And I'm out for a meal myself. Eating in Candealn would be unpleasant, given circumstances." She mulled something over, then snapped her fingers. "Care to join me?"