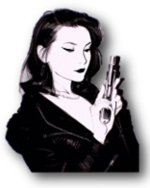 Mae and Branwen made eased pace through the corridors. Neither seeming overly rushed to get through the obstacles; mostly due to Mae's concern of Branwen's capability of getting through more dense area's. But it wasn't a bother to Mae, she wasn't alone in this madness now and so the slower pace was acceptable.

Suddenly their avoidance of obstacles hit a wall, literally. Well, almost literally. A large wall of fallen rubble had blocked their path. At the top of the pile there was a small crawl-way that they could fit through, but the other side was not a guarantee. After quick conversation they agreed Mae would go first to check it out.

With a careful climb up the tower of rubble Mae finally found herself at the entrance of the hole. Peering through she found light at the end, a promising sight. Mae pulled herself into the narrow crawl space and pulled and crawled her way through as carefully as she could; trying not to cut herself on any sharp edges. After a short time she made it to the other side and with a aerobatic flip off the side of the rubble pile she cleared the distance and landed on some flat ground.

She checked her surroundings quickly to make sure this was a pursuable route and not another dead end. From initial assessment it looked like a solid path, at least given the situation. She turned back towards the rubble and was about to call back to Branwen to come through. But a sudden, distant rumble that shook the hallway corridor. And while the shaking wasn't too aggressive it was enough to make the loose rocks above the block to break more rubble and completely seal the crawl way. After the small explosion came the distant sound of war cries.

"BRANWEN! SOMETHINGS HAPPENING! BE SAFE, WE'LL FIND EACH OTHER WHEN WE CAN!" Mae yelled at the pile of rubble, hoping that Branwen heard her.

Taking action Mae sneakily glided down the corridor towards the T, coming to the end she peered down both halls. One was blocked with fallen rubble and the other lead towards the sounds of battle. She had little choice. She might have been able to crawl through some spots in the rubble but if she was caught in the wall, she would have no defendable position. So towards battle it was, and hopefully she could use the chaos as a cloak.

Making her way down the new path as quietly as she could she finally found the big room, filled with chaos and bloodshed. Her teeth gritted with thoughts of home. These skirmishes were familiar, though not mercenaries and adventurers but common folk versus the military. She shook the memory from her mind, she needed to be present and aware. Peering around quickly for a route to take she found a large lizardman and arm clad elf seeming clearing a path of their own. And a path like that would definitely something Mae could take advantage of.

Quickly Mae burst into a full sprint, skirting around the edge of the large room away from the chaos and towards the pair. If any took note and tried to confront her, seeing a small foreigner made her an easy target, but they under estimated her. With quick strikes she disoriented her attacker as quickly as she could before moving on; not taking the time to put them down but give her a window to move past.

In From Oubliette to Oublioth → 3 mos ago Forum: Casual Roleplay

The foreign girl spent most of her morning meandering around the cluster of tents and micro shops that had steadily grown since the night prior. Despite her year traveling these lands she still felt an air of uncertainty of what dangers lie before her at the start of any venture. Up to now she had been able to defend herself against most monsters. Either by combat or tactical retreat. But this crumbling mass of a stone seemed a bit more domineering than open fields where most of her opponents had been found.

She heard of this quest the day before while spending time within the nearby town. She had absolutely no luck finding adventurers to aid her quest to reclaim her land in this past year. But this reward could possibly sway the odds in her favor. To have a bounty of coin in her purse large enough to buy her aid.

As she walked she considered making a request to join others parties to ascend the tower of ruin to claim its prize. But over the years her luck with strangers would be considered anything but fortuitous. So her doubts often halted her approached before beginning her search once again through the encampment.

As she walked a loud chortling caught her attention; her soft brown gaze being pulled to look towards the direction of the sound. Instantly Mae's figure became stiff and rigid, like a small statue. Her eyes wide as they stared directly at the small, furry creature seemingly being belittled by the small group of adventurers. Her mind was on red alert, alarm bells blaring to keep calm.

'oh fu... it's so cute and fluffy... we need to calm down mae.. we can't pet strangers...' She gulped nervously as she talked herself down within her own thoughts.

Realizing she hadn't taken a breath in quite some time she shakily pulled a breath into her lungs, luckily helping her calm down. She took a few more breaths as she became less rigid and regained some semblance of composure. She awkwardly cleared her throat as she brushed her exotic dress with her hands; an odd attempt to secretly relaxed the anxiety and eagerness that had risen within her. Finally given some mental freedom she processed what had happened as she noticed the small mouse creature sitting sadly on a stump of crumbled stone. Apparently the party had mocked the poor creature and abandoned it, or something of the sort.

"Hey there. Do you need an adventure companion?" Mae asked calmly, her voice soft and faintly touched with a foreign accent.

All the while her mind and heart pounded in a mix of excitement and anxiety.