245 posts
in 1785 days
Seen 6 days ago
"Nelson 'The Infamous' Lloyd has been sentenced to be hung by the neck until dead. In the year of our lord 185X, the Territory of New Mexico has sentenced Nelson Lloyd to death on various counts of hideous crimes. At high noon the lever will be pulled and his criminal life brought to and end. In the small town of Tubac, a gartering of townsfolk meet for the execution. Mixed in with them are those who look forward to seeing Lloyd dead, long for him to live one day longer, and those plotting to see the nose be cut."

I am looking to gather 6 dedicated players to join me in a wild adventure through the old west. I have been a fan of the Star Wars RPG system for some time and have managed to use the system well in an ongoing game. I have found a Western Conversion of the game that I want to run with some fine players like yourselves.

The game will run very much like my ongoing game 'Edge of Tamriel - Aetherium'. Check it out if you want a taste.

You can search for the Edge of the Empire rules online, they are prolific.
Hidden 4 yrs ago Post by rush99999
Raw — 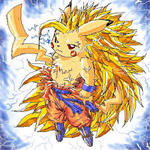 Ohh yea. Muffin and Eklipse in the Wild West? Purrrrfect.

I do not know how long this image will stay up but... We are at 4. 1 or 2 more to go then Ill start up the official thread.
Hidden 4 yrs ago Post by thorgili
Raw —

We are at 5. Shall we move to an official thread?
Hidden 4 yrs ago Post by Eklispe
Raw —