Mightier than the Sword 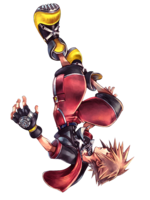 Jessie's great...one thing, though, with her powers she would be typed as Volatile/Distortionist/Mentalist (ooooo....first triple type)

You have been assimilated.
In Anomalous → 9 mos ago Forum: Casual Roleplay
Join the Discord!

Well, here's how it would be:

The numbered classes (1-5...six would no longer be necessary) would classify the actual abilities.

The descriptive classes that I have listed would describe the Variant themself. These are used as a codeword to get a quick read on a Variant's capabilities with as few words as possible.

With what you have, @Ceta de Cloyes, you're only classifying abilities. If I were to just tell you there was a 'Red level Variant with enhancements' that you needed to deal with, you would have no idea what to prepare for. However, if I instead told you that there was a 'Red level Brute', you would be expecting someone with super strength and not someone who can blow you up. That's the point of the types.

The types basically describe how a Variant would be perceived upon someone first meeting them and seeing their powers in action. Some Variants might fit into multiple categories by default...for example, Nightwolf could possibility be a Brute, Agile, Amplifier, and/or Metamorphic, but only the Metamorphic descriptor would be necessary because it describes how his abilities are mainly used. The rest are basically side effects.

These describe the overall view without trying to nitpick their powers apart and describe each one. Make sense?
In Anomalous → 9 mos ago Forum: Casual Roleplay
Ok guys,

So, I changed the "Class/Level" tag in the CS to "Variant Type/Danger Level".

Brute - Variants with increased levels of strength and/or durability; they may be more difficult to harm or take down

Metamorphic - Variants can change anatomy and/or physiology, either partially or fully; can take human or non-human forms including animal, mineral, energy, or alien

Volatile - Variants have abilities dealing with fire, electricity, plasma, and any other explosive energy/force

Agile - Variants are prone to quick movements and/or fast/instant travel; they may possess increased levels of dexterity

Inhibitor - Variants wield powers that can weaken and/or hinder others

Distortionist - Variants are able to alter space-time, intangible concepts, or reality as a whole

Architect - Variants who are able to manipulate, modify, and/or replicate matter and/or energy; some are able to construct tangible objects from energy

Also, the abilities will be listed under their respective classes. So please, modify your CS's accordingly. You can look at Manny's CS for an example. If any of you is unsure if something just let me know! ^_^
In Anomalous → 9 mos ago Forum: Casual Roleplay
I'm still waiting on a few players to finish CS's...I'm shooting for next week sometime since I'm busy this weekend.
© 2007-2017
BBCode Cheatsheet