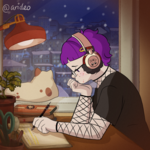 2 yrs ago
Current Qu'est-ce que c'est
3 yrs ago
I'm here to kick ass and chew bubble gum... and I'm all out of bubble gum
2 likes

Just a girl tryna have some fun. Roleplaying, that is.

In Seeking Slice of Life Role Players → 1 yr ago Forum: 1x1 Interest Checks
Hi there! I'm interested in hearing a little more about your idea :)))
In Children of the Zodiac (Open) → 1 yr ago Forum: Casual Interest Checks
Hi there! I adore this idea! I get it if the original person who claimed the sign comes back but I'd love to join this group and claim Aquarius? By any chance? I'm flexible tho and would be down to whip up a character for any of the signs tehehe. That's just the one that interested me the most! 
Once school was let out, Vi walked home solely to drop off her things. The physical movement made her body temperature rise, so she took off her sweater. Her shoulders were a tad cold, but all that mattered was that she wasn't stinking up her clothes by sweating. She knew how her dad would feel about that.

Walking up the steps of the manor, Violet went to open the large, antique door when Hilda opened it for her. She was in her maid's outfit, even though Vi had told her years ago it wasn't necessary. Most days, Hilda ventured to wear regular clothes, but when she didn't, V knew why. Her father had finally left his cave for more than three minutes, which mean everything had to be perfect. It also meant she'd have to gracefully shoo away any of his guests. Particularly if they were his creepy business partners.

"Come on, girlie. I have things to do and you need to vamoose," Hilda said to her as she pulled Vi inside.

Hilda was always looking out for Vi, and she appreciated the extra assistance in hiding from her father and whoever was over today. The maid shooed her upstairs, saying, "Get your stuff in your room and grab whatever you need to head out." She grabbed Violet's hand, placing her father's credit card in her hand. "Go crazy," she winked.

Violet smiled, a little more evil than necessary. "My pleasure." She didn't have the heart to tell Hilda that she already had Mr. DeWinter's American Express in her purse. She supposed she'd just have to rack up a charge on both... though perhaps not in town.

Everyone already knew of Violet's wealth. It was pretty moot to flash it unless she were to go into one of her favorite little boutiques. Mentally, Vi made a list of things she could do as she put her things in her room. On her bed, her cat named Louis sat. She scratched his head, plopping a little kiss on his forehead. Putting her father's credit card and a small paperback copy of Emma by Jane Austin in her purse, she slung it across her shoulder and folded her sweater over it and through the strap. Making her way out of her room, Vi stopped for only a moment to reapply her ruby red lipstick and to tuck one side of her hair out of her face. Then, she shut the door behind her and snuck down the stairs. From the front door, she saw her father just around the corner. Next to him, in the parallel loveseat, balding Mr. Gooseneck sat. Making a faux gagging face, Vi opened the door and left with a clack.

The town was quiet, and she noticed that everyone was avoiding her. When she went into the small coffee shop, the cashier simply pushed the money towards her instead of handing it to her. Violet narrowed her eyes, turning into a snake. She felt ten feet tall.

"It's just a fucking rumor." She didn't mince her words. "At least I'm not working a good-for-nothing barista job where shit like this happens," That's when she took the sugar dispenser and dumped it all over the floor. She dropped the container on the ground, hearing it clang. "It's almost like I'm just an heiress who's capable of a tantrum," she said with a calm smile though her eyebrows were arched like a queen's.

"Now, thanks for the cappuccino. Have a lovely day!" she said with a sickenly sweet tone as she set a hundred on the counter, hoping the money would make up for her tantrum. The bell rang as she left the shop.

She felt her cheeks inflame. Every year, the adults of the town treated her like this. Like she was some sort of deadly creature who had the touch of a monster. Perhaps it was an actual curse that she carried. It didn't stop Violet from seething. She was already an outsider due to monetary reasons, now there's this whole murder rumor that follows her every Halloween. It was bad enough that any sympathy she had for prior victims was moot and useless. Everyone was going to see her the way her family was built to be seen.

Sitting on a bench surrounding the fountain, Vi tried to calm down and sip her coffee. She opted to observe the town from afar, people-watching instead of participating.
In canceled → 1 yr ago Forum: General Interest Checks

I love Ever After High, I collect the dolls. But, I’m not sure about this concept tbh...

Random question: Why do Prince Eric and Little Mermaid have separate kids? Are we going with the mermaid dying and Eric married (and had a child with) someone else like the original tale? Or has someone been less than faithful?

Hi there! I was thinking that in cases with pairings like that, the Child of Ariel would have Ariel as their mom while having a different father. And vice versa for the Child of Eric. While they have been married for the purpose of fulfilling their storyline, it would just be easier to assume that there's no blood relation between any children of romantic pairings (for obvious reasons). This would just be easier plus it's more so the forced embodiment of the story that's the focus of the rp as opposed to the relationship with the parents. If it helps, try to think of "The Little Mermaid" and "Prince Eric" more so as roles instead of actual people.

This is more so a WIP rn bc I don't want to invest all this time into a group that not many people are interested in, so thank you for your question! It really helps (:
In canceled → 1 yr ago Forum: General Interest Checks
canceled
In How The Leaves Fall → 2 yrs ago Forum: Casual Roleplay
@Kassarock

Vi's probably going to hang around in town, maybe get another coffee to curb her caffeine addiction and try to find a quiet corner in a park or something to read in.
In How The Leaves Fall → 2 yrs ago Forum: Casual Roleplay
.·:·.☽✧


Vi swallowed hard at Eli's words. She knew what she had said was unkind; part of her wanted to push his buttons. It at least kept his interest, though even she couldn't deny she was acting like a little boy on a playground. Would Eli's parents say she's just being mean because she likes him? If so, Violet would want to punch either of them. While it may be true, it's not like it's okay. She's just not at a place where she can really work to change things.

"Sorry..." she mumbled, turning her eyes downward. Eli's words and Ben's addition to the awkward silence forced her to confront the faux pas she just committed. She tried to clear her throat again. "I didn't mean to..."

This was always where Violet got herself into trouble. Being blissfully unaware of her cruel remarks made her plow through conversations, letting her come out on top. Today was not the day for her to do this, however, and it only made her falter. The "DeWinter Heiress" persona was off for today, and how ironic was it for a Redgrave to bring it out?