STATUS: @LadyAnnaLee As someone who has done it in the past, I highly recommend you don't do it. I don't want to see you harm yourself. 9 mos ago

9 mos ago
Current @LadyAnnaLee As someone who has done it in the past, I highly recommend you don't do it. I don't want to see you harm yourself.
3 likes
2 yrs ago
If anyone is interested in joining a Pokemon Orre Region based RP, please feel free to get a hold of me.
2 likes
2 yrs ago
New Multiversal Rp based on Dragon Ball Super Coming soon!
2 likes
3 yrs ago
I really want to get a Pokemon Colosseum based Rp running again. The Orre region never got enough love in my opinion.
4 likes
3 yrs ago
Starting up a World of Warcraft RP, if anyone is interested please PM me. Probably going to be AU or in the future.
3 likes

In Pokémon: Rust → 5 mos ago Forum: Casual Roleplay
"Although, I think you'll find we're not going down so easily this time."

Darren was caught a little off guard by the move Rory's Floatzel was using.. His Camerupt was going to have a difficult battle this time and if Camerupt were to take a direct hit from a water attack that powerful he wasn't sure if the Pokemon would be able to take the hit. Camerupt was the oldest member of his team and he didn't want to see it hurt or in pain.

Overseer Darren Steele of Terran Town let a small grin form on his face as he took the offered hand and shook it.

"Rory Bennett, Good to see you again." Darren said as the grin widened. The grin faded somewhat as muffled cursing and yelling began to make itself known as four burly mine workers dragged two men unfamiliar to Darren out through the entrance of the mine. "Give me a minute here, Rory. Gotta take care of something real quick."

Darren turned away from Rory and stared down at the two men who had been dragged out of the mine. "What's all this about?" He asked calmly. One of the unfamiliar men managed to get himself free from the grasp of the mine worker and took a threatening step towards Darren who calmly threw a Pokeball into the air and a moment later, a large red Pokemon appeared in a blaze of light. The Camerupt growled and two pillars of flame shot into the air. As the demonstration was intended to do, the unfamiliar men froze up.

"I'll ask again. What is this about?" he asked calmly. "Found em trying to make off with a bunch of ore, boss." The largest of the mine workers said. "Caught em red-handed."

"It wasn't like tha-!" One of the men started to say only for the Camerupt to growl at him. "Okay, so maybe it was what it looked like. We've got nothing right now! We blew everything we had last night!"

Darren's eyes turned cold and a frosty smile formed. "So you blew all your money so you decided to steal from us, Hmmm?"

Darren put his arms around the shoulders of the two men and motioned towards the mine. "Today is your lucky day, my friends. Just so happens two of our men were just promoted today. We have an opening for two new mine workers. Its honest work and you'll get to make all sorts of new friends and your probably going to gain a lot of muscle over the next few months!"

The two men looked helplessly at Darren and then back at the mine. "What if we refuse?!"

"Then you will never be allowed in this town again. I know everyone here, fellas. They'll tell me if you show your faces around here if you decide to decline this opportunity."

The two men looked at one another and then at the mine and sighed and headed towards the entrance. "Good choice!" Darren called after them. He looked at the two larger of the four who had brought the men out. "Rocky, Slade, consider yourselves promoted. Your new job is to keep an eye on those two. Don't let em run off with anything."

Rocky nodded. "Got it, Boss. They won't get away with anything with us watching em."

The four headed back to the mine and Darren grinned before turning back to Rory.

"Sorry about that, friend. Been having more and more issues with people lately. Tough love approach seems to work though."

If ZX-797 had a mouth he would have a sigh escape at that moment. He knew his new cyborg body needed repairs but knowing how the supply lines were slowly dwindling he knew it was likely he wouldn't be able to repair the majority of his damaged systems for a long time. He had already done his best to try and find parts that could help repair some of his more vital systems but pickings were slim. His current priority was to keep his life-support systems going and his defensive systems at optima levels but even that was starting to become a challenge.

As much as ZX had hated the Republic, the Empire was proving to be far worse. During the Clone Wars, ZX had made sure to limit his targets to enemy military forces only. But the Empire seemingly didn't care about that. He had seen civilians gunned down a few times before he had arrived on Telos IV and heard the rumors and whispers of imperial massacres on distant worlds.

The cyborg sat completely still as he continued checking over the rest of his systems. 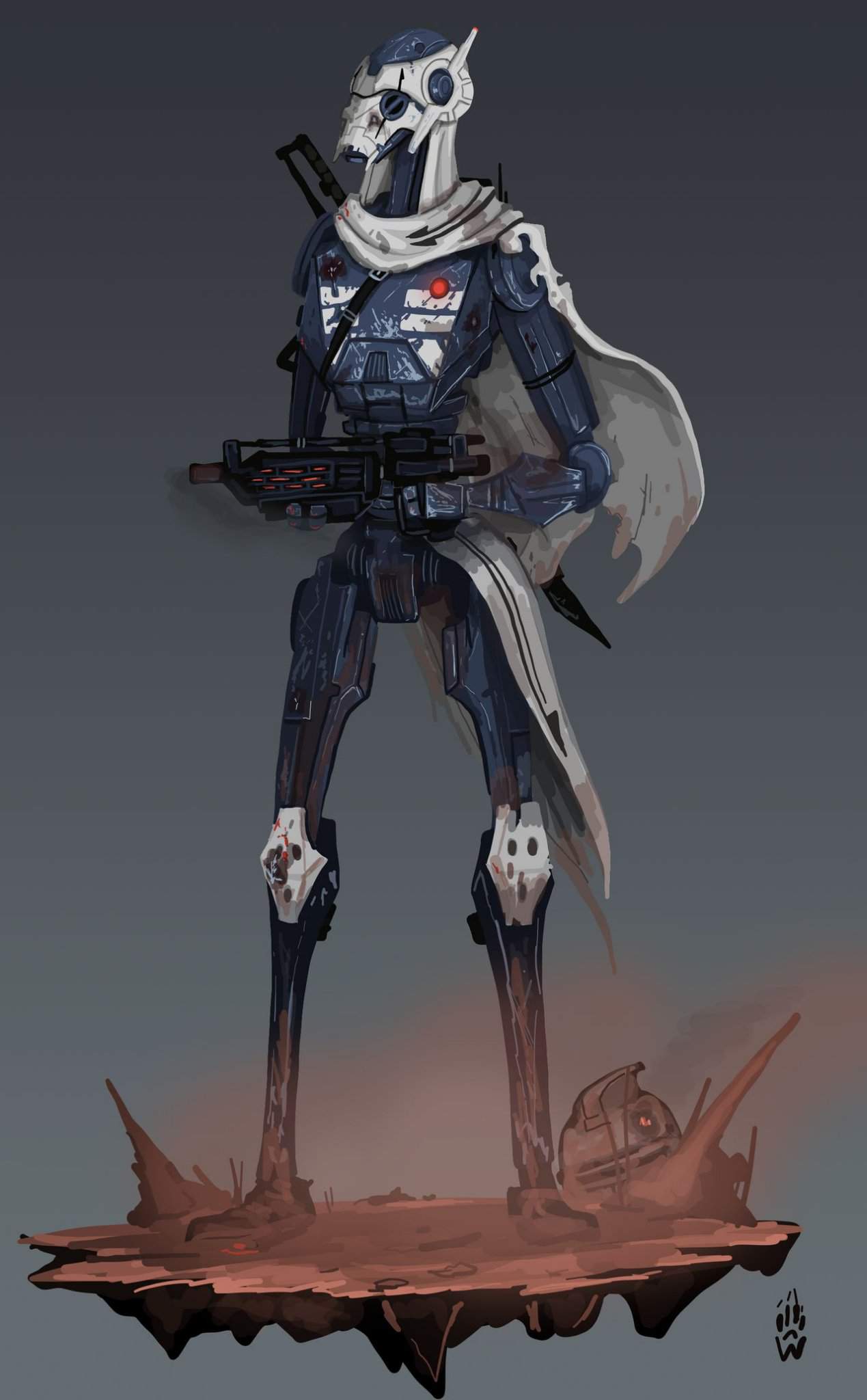 Ask five different people who or what they think ZX-797 is and you'll get five different answers. Many say that he is simply an advanced assassin droid deployed by the CIS out of desperation in the last days of the war. Others say that it was an experiment that went wrong and slaughtered his creators before vanishing into the galaxy.

The truth is a bit darker than that.

In the years before the rise of the Empire when the Republic and CIS fought for control of the galaxy, a small number of CIS scientists were tasked with researching a more advanced killing machine. Taking inspiration from the Kaleesh cyborg General Grievous they shifted their attention from droids to cyborgs. There was no shortage of volunteers for the experiments and although very few of the volunteers survived the initial experiments, the few that did only survived for a short while before being driven insane by what they had become, their minds unable to adapt to their new existence.

The scientists were about to report the project as a failure to the CIS leadership as the stream of volunteers quickly began to dry up as rumors circulated of the experiments. It was at this point, that a former mercenary for the Republic appeared and began asking about the experiments. The scientists, naturally suspicious proceeded to interrogate the mercenary for a number of days. In that time, they learned that the mercenary had lost everything due not to the CIS, but to the Republic when his sole child had been killed when the Republic had bombarded the city she lived in from space. More and more republic atrocities came to light as everything the mercenary had seen was brought into the light.

The scientists and the CIS leadership agreed: By all means, let him volunteer.

Over the course of weeks, the mercenary was not outfitted with cybernetic parts but instead his mind was placed into an experimental droid body that was designed purely for killing. Fitted with a high power experimental built in blaster and a number of tactical upgrades with CIS battle tactics downloaded into his mind, the mercenary turned CIS experiment was deployed in the last days of the clone wars.

The Republic mercenary was dead. All that remained was a cybernetic monster.

Eager to show his worth. ZX was able to kill numerous clone troopers and at least three Jedi Knights before Order 66 and the Rise of the Empire. It was shortly after that that ZX returned to the scientists on Mygeeto for new orders after his latest mission and found his creators had vanished into the galaxy after the near fall of the CIS. As more and more time passed and more news reports came in about the rise of the Empire, ZX came to a conclusion: As bad as he perceived the Republic to have been, the Empire was far worse. After a few days of updating his targeting scanners and optimizing his tactical systems he found a number of weapons that he believed had been meant for him. A spare arm with a built in flamethrower and a number of compact heat seeking missiles that he was able to install into his upper body frame.

It took a number of weeks, but he was able to steal a small one man ship from the spaceport and was finally free to make his way into the galaxy.

Weaknesses:
Vulnerability to Ion weapons. Any sort of Ion weapons can stop him dead in his track. Enough of them can shut down the mechanical parts keeping his brain alive.
Vulnerability to extreme heat. Extreme heat, like the heat found on the planet Mustafar can cause long term damage to his systems.
He lacks the ability to repair his own systems.

Equipment:
Experimental high power blaster built into his left arm.
Flamethrower that has been built into a spare right arm.
retractable vibro blade that is hidden in his current right arm.
CIS Sniper Rifle that is strapped across his back.
In Star Wars -- Winter of the Confederacy → 7 mos ago Forum: Casual Roleplay

@Auz @Chev @Dusty Not to be a pushy bastard but could I get an update on sheet progress?

I have an idea. Haven't been able to start writing it yet but I'm very close to it it. Got a family reunion coming up this weekend so planning for that is also killing some of my creative thinking/writing time xD. I should have mine done relatively soon.